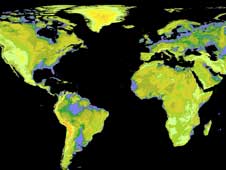 This image was created by processing and stereo-correlating the 1.3 million-scene ASTER archive of optical images.
› Full image and caption/related images PASADENA, Calif. - NASA and Japan released a new digital topographic map of Earth Monday that covers more of our planet than ever before. The map was produced with detailed measurements from NASA's Terra spacecraft.

The new global digital elevation model of Earth was created from nearly 1.3 million individual stereo-pair images collected by the Japanese Advanced Spaceborne Thermal Emission and Reflection Radiometer, or Aster, instrument aboard Terra. NASA and Japan's Ministry of Economy, Trade and Industry, known as METI, developed the data set. It is available online to users everywhere at no cost.

"This is the most complete, consistent global digital elevation data yet made available to the world," said Woody Turner, Aster program scientist at NASA Headquarters in Washington. "This unique global set of data will serve users and researchers from a wide array of disciplines that need elevation and terrain information."

NASA and METI are jointly contributing the Aster topographic data to the Group on Earth Observations, an international partnership headquartered at the World Meteorological Organization in Geneva, Switzerland, for use in its Global Earth Observation System of Systems. This "system of systems" is a collaborative, international effort to share and integrate Earth observation data from many different instruments and systems to help monitor and forecast global environmental changes.

NASA, METI and the U.S. Geological Survey validated the data, with support from the U.S. National Geospatial-Intelligence Agency and other collaborators. The data will be distributed by NASA's Land Processes Distributed Active Archive Center at the U.S. Geological Survey's Earth Resources Observation and Science Data Center in Sioux Falls, S.D., and by METI's Earth Remote Sensing Data Analysis Center in Tokyo.

Aster is one of five Earth-observing instruments launched on Terra in December 1999. Aster acquires images from the visible to the thermal infrared wavelength region, with spatial resolutions ranging from about 15 to 90 meters (50 to 300 feet). A joint science team from the U.S. and Japan validates and calibrates the instrument and data products. The U.S. science team is located at JPL.

For visualizations of the new Aster topographic data, visit: http://www.nasa.gov/topics/earth/features/20090629.html .