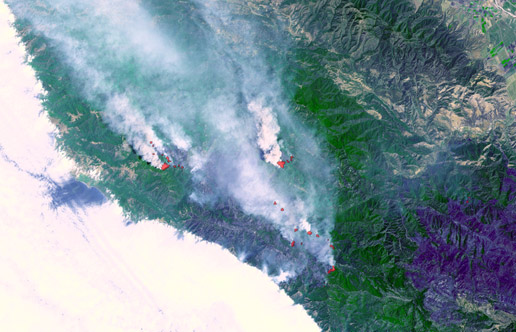 Fires near Big Sur, Calif., continued to burn unchecked when the Advanced Spaceborne Thermal Emission and Reflection Radiometer (ASTER) instrument on NASA's Terra satellite captured this image on Sunday, June 29. In Northern California alone, fires have consumed more than 346,000 acres.At least 18,000 people have deployed to attempt to extinguish or control the flames. Air quality as far away as San Francisco has been adversely impacted by the dense clouds of smoke and ash blowing towards the northwest. The satellite image combines a natural color portrayal of the landscape with thermal infrared data showing the active burning areas in red. The dark area in the lower right is a previous forest fire.

ASTER is one of five Earth-observing instruments launched December 18, 1999, on NASA's Terra satellite. The instrument was built by Japan's Ministry of Economy, Trade and Industry. A joint U.S./Japan science team is responsible for validation and calibration of the instrument and the data products.