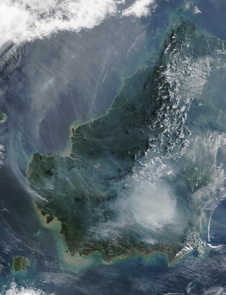 Haze from fires is thick over the Indonesian island of Borneo. Scores of wildfires (red dots) were detected by the Moderate Resolution Imaging Spectroradiometer (MODIS) on the Terra satellite on August 19, 2002 during a moderate El Nino year. The region’s wildfires first grabbed public attention in 1997-98 when emissions from deforestation fires that blazed out of control reached 40 percent of the total global carbon emissions for the period. Credit: NASA
> Larger image 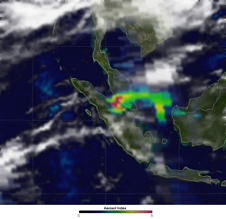 Out-of-control fires burning on the eastern shore of Sumatra (image center) shrouded parts of Malaysia in smoke in this August 2005 image. This image, captured by the Ozone Monitoring Instrument (OMI) on NASA’s Aura satellite, shows smoke density -- with the thickest areas shown in red. Winds in this region often blow from the west, spreading smoke from burning peat swamp forest in coastal Sumatra toward the east. Credit: NASA
> Larger image 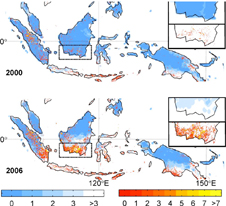 This view shows how fires mostly occurred during drought years, with very few fires in 2000 when the dry season was short due to La Nina conditions while an extended dry season during the moderate 2006 El Nino led to widespread fires. The southern Borneo region is boxed and the dry season length (indicated in number of months in blue and white) and number of fire detections (in reds and yellows) for this study region are shown in separate insets. Credit: NASA
> Larger image In the last decade, Asian farmers have cleared tens of thousands of square miles of forests to accommodate the world’s growing demand for palm oil, an increasingly popular food ingredient. Ancient peatlands have been drained and lush tropical forests have been cut down. As a result, the landscape of equatorial Asia now lies vulnerable to fires, which are growing more frequent and having a serious impact on the air as well as the land.

A team of NASA-sponsored researchers have used satellites to make the first series of estimates of carbon dioxide (CO2) emitted from these fires -- both wildfires and fires started by people -- in Malaysia, Indonesia, Borneo, and Papua New Guinea. They are now working to understand how climate influences the spread and intensity of the fires.

Using data from a carbon-detecting NASA satellite and computer models, the researchers found that seasonal fires from 2000 to 2006 doubled the amount of carbon dioxide (CO2) released from the Earth to the atmosphere above the region. The scientists also observed through satellite remote sensing that fires in regional peatlands and forests burned longer and emitted ten times more carbon when rainfall declined by one third the normal amount. The results were presented in December 2008 in Proceedings of the National Academy of Sciences.

Tropical Asian fires first grabbed the attention of government officials, media, and conservationists in 1997, when fires set to clear land for palm oil and rice plantations burned out of control. The fires turned wild and spread to dry, flammable peatlands during one of the region’s driest seasons on record. By the time the flames subsided in early 1998, emissions from the fires had reached 40 percent of the global carbon emissions for the period.

"In this region, decision makers are facing a dichotomy of demands, as expanding commercial crop production is competing with efforts to ease the environmental impact of fires," said Jim Collatz, an Earth scientist at NASA’s Goddard Space Flight Center in Greenbelt, Md., and a co-author of the study. "The science is telling us that we need strategies to reduce the occurrence of deforestation fires and peatlands wildfires. Without some new strategies, emissions from the region could rise substantially in a drier, warmer future."

Since the 1997 event, the region has been hit by two major dry spells and a steady upswing in fires, threatening biodiversity and air quality and contributing to the buildup of CO2 in the atmosphere. As more CO2 is emitted, the global atmosphere traps more heat near Earth’s surface, leading to more drying and more fires.

Until recently, scientists knew little about what drives changes in how fires spread and how long they burn. Collatz, along with lead author Guido van der Werf of Vrije University, Amsterdam, and other colleagues sought to estimate the emissions since the devastating 1997-98 fires and to analyze the interplay between the fires and drought.

They used the carbon monoxide detecting Measurements of Pollution in the Troposphere (MOPITT) instrument on NASA’s Terra satellite -- as well as 1997-2006 fire data and research computer models -- to screen for and differentiate between carbon emissions from deforestation versus general emissions. Carbon monoxide is a good indicator of the occurrence of fire, and the amounts of carbon monoxide in fire emissions are related to the amount of carbon dioxide. They also compared the emissions from different types of plant life (peat land vs. typical forest) by examining changes in land cover and land use as viewed by Terra's Moderate Resolution Imaging Spectradiometer (MODIS) and by Landsat 7.

"This link between drought and emissions should be of concern to all of us," said co-author Ruth DeFries, an ecologist at Columbia University in New York. "If drought becomes more frequent with climate change, we can expect more fires."

"This study not only updates our measurements of carbon losses from these fires, but also highlights an increasingly important factor driving change in equatorial Asia," explained DeFries. "In this part of Asia, human-ignited forest and peat fires are emitting excessive carbon into the atmosphere. In climate-sensitive areas like Borneo, human response to drought is a new dynamic affecting feedbacks between climate and the carbon cycle."

In addition to climate influences, human activities contribute to the growing fire emissions. Palm oil is increasingly grown for use as a cooking oil and biofuel, while also replacing trans fats in processed foods. It has become the most widely produced edible oil in the world, and production has swelled in recent years to surpass that of soybean oil. More than 30 million metric tons of palm oil are produced in Malaysia and Indonesia alone, and the two countries now supply more than 85 percent of global demand.

The environmental effects of such growth have been significant. Land has to be cleared to grow the crop, and the preferred method is fire. The clearing often occurs in drained peatlands that are otherwise swampy forests where the remains of past plant life have been submerged for centuries in as much as 60 feet of water. Peat material in Borneo, for example, stores the equivalent of about nine years worth of global fossil fuel emissions.

"Indonesia has become the third largest greenhouse gas emitter after the United States and China, due primarily to these fire emissions," Collatz said. "With an extended dry season, the peat surface dries out, catches fire, and the lack of rainfall can keep the fires going for months."

Besides emitting carbon, the agricultural fires and related wildfires also ravage delicate ecosystems in conservation hotspots like the western Pacific island of Borneo, home to more than 15,000 species of plants, 240 species of trees, and an abundance of endangered animals.

Smoke and other fire emissions also regularly taint regional air quality to such a degree that officials have to close schools and airports out of concern for public health and safety. Peat fires also aggravate air pollution problems in this region because they release four times more carbon monoxide than forest fires. In 1997, air pollution from the fires cost the region an estimated $4.5 billion in tourism and business.