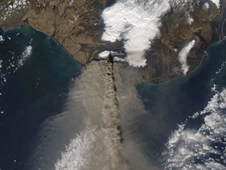 The visible ash plume from Iceland's Eyjafjallajökull volcano was captured by NASA's Aqua satellite on April 17. The ash caused the shutdown of air traffic over much of Europe for several days. Credit: NASA

Last month when ash from a volcanic eruption in Iceland shut down air traffic over much of Europe, an international network of centers dedicated to this aviation hazard sprang into action. Using primarily data updated several times an hour from weather satellites orbiting in fixed positions over 20,000 miles above, regional Volcanic Ash Advisory Centers issued updates on the location of the ash and forecasts of where the plume was headed.

But some details of the tiny glass-like aerosol particles that make up volcanic ash and the associated sulfur dioxide gas plumes are difficult for these satellites to make out. Volcanic ash clouds often look very similar to regular clouds. And exactly how high in the sky the ash is, a critical piece of information for planning flights, is hard to determine.

Over the past few years, observations from several sensors on NASA’s fleet of research satellites focused on the complex workings of our planet and its climate have been adapted to create new tools to aid in volcanic ash hazard warnings for aviation. Since 2007 NASA-funded scientists in Maryland have provided the United States' advisory centers in Washington, D.C., and Anchorage, Alaska, with regular regional updates on volcanic ash and sulfur dioxide plumes using data from NASA's Aura satellite. Last month during the height of the shutdown of European air traffic, NASA for the first time began providing similar customized reports to European advisory centers. 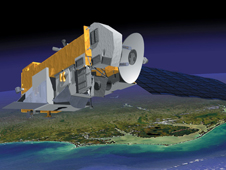 These data products are created within three hours of when Aura passes over an area in its 24/7, pole-to-pole orbit some 400 miles above Earth. An automated system at NASA’s Goddard Space Flight Center, Greenbelt, Md., uses data from the Ozone Monitoring Instrument (OMI), an Aura sensor that was developed by The Netherlands and Finland. The Washington advisory center, coordinated by the National Oceanic and Atmospheric Administration (NOAA), distributes the data via its web site. Pieternel Levelt, OMI principal investigator at the Royal Netherlands Meteorological Institute, also provided the data directly to air traffic officials in The Netherlands.

"The Aura/OMI observations enable more reliable and accurate detection of volcanic ash clouds," said John Haynes of NASA's Earth Science Division in the Science Mission Directorate, Washington. "These data provided the European advisory centers with better information to use in volcanic ash forecasting and determining safe fly zones. And they are an additional way to check how good those forecasts were."

Sulfur dioxide is a reliable marker for fresh volcanic ash clouds under clear skies especially in the early days of a high-altitude eruption. It can at times indicate the presence of ash when the ash cannot be visually detected from space. "OMI data have been very useful for tracking volcanic clouds over the last few years, and we are now identifying eruption times and locations of the Icelandic ash clouds," said Nicolai Krotkov of the University of Maryland Baltimore County who works on the OMI aviation products. "Without adequate information, forecasters have issued conservative predictions that caused many airports to shut down." 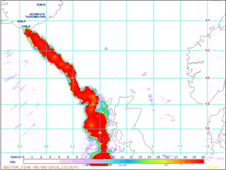 Another project supported by NASA and NOAA at the University of Wisconsin developed new techniques for distinguishing volcanic ash clouds from regular clouds and estimating the height of ash plumes using data from a different sensor on Aqua and its sibling Terra. These data products, still in the prototype stage, were supplied to the volcanic ash advisory center based in London, according to Mike Pavolonis, project lead scientist for NOAA. The NASA sensor, the Moderate Resolution Imaging Spectroradiometer, or MODIS, is widely used by research scientists to study many types of aerosols, including desert dust, smoke from forest fires, and air pollution.

The efforts to turn OMI and MODIS research data into reliable products for agencies responsible for aviation safety around the world are funded by NASA's Applied Sciences Program in the Earth Science Division. The program’s goal is to supply specific societal benefits from research observations and knowledge obtained from NASA’s Earth science program.

NASA outlined its capabilities and activities in volcanic ash cloud monitoring on May 5 at a Congressional hearing in Washington. Jack Kaye, associate director for research in NASA’s Earth Science Division, described the agency's programs at a subcommittee hearing of the U.S. House of Representative's Committee on Science and Technology.