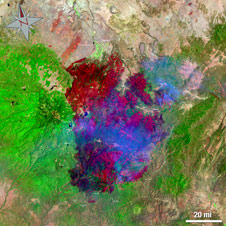 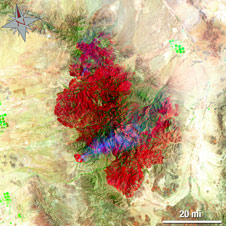 › View larger image
› Print resolution TIF (14 Mb)
Both fires shown in the same image. Credit: NASA/USGS, Mike Taylor The largest fire in the history of the state of Arizona continues to burn and emergency managers and responders are using satellite data from a variety of instruments to plan their firefighting containment strategies and mitigation efforts once the fires are out.

The Landsat 5 satellite captured images of the Wallow North and Horseshoe 2 fires burning in eastern Arizona on June 15, 2011 at 19:54:23 Zulu (3:54 p.m. EDT). Both images are false-colored to allow ease of identification of various objects that will help firefighters and emergency managers. In the images burn scars appear in red and ongoing fire in bright red. Vegetation is colored green, smoke is colored blue and bare ground is tan-colored. The Landsat 5 image is a false color image with a 7, 4, 2 band combination.

The Wallow fire began May 29, 2011 in the Bear Wallow Wilderness area located in eastern Arizona. High winds and low humidity meant that by June 14, 2011 the Wallow Fire became Arizona’s largest wildfire to date with over 487,016 acres burned. On the morning of June 16 the fire is now 29 percent contained, according to Inciweb. Inciweb, the "Incident Information System" website, (www.inciweb.org) is an interagency all-risk incident information management system.

The National Weather Service has posted a Red Flag Warning for June 16 and 17. The warning forecasts strong winds from the southwest with gusts to between 35 and 45 mph.

Inciweb reported that the Horseshoe 2 Fire began on May 8 in Horseshoe Canyon on the Douglas Ranger District of the Coronado National Forest, located in southeast Arizona. The Chiricahua National Monument in the northern area of the fire was closed on June 9 and remains closed. As of June 16, 184,198 acres had burned, and the fire is reported as 60 percent contained.

The Landsat series of satellites is used by emergency managers to acquire a range of imagery and data, from floods to fires. Landsat has also recently provided images of the flooding of the Mississippi River.

The Landsat Program is a series of Earth-observing satellite missions jointly managed by NASA and the U.S. Geological Survey. Landsat satellites have been consistently gathering data about our planet since 1972. They continue to improve and expand this unparalleled record of Earth’s changing landscapes, for the benefit of all. The next Landsat satellite is scheduled to launch in December 2012.