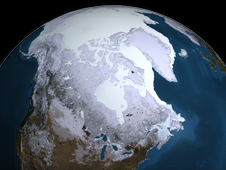 This data visualization from the AMSR-E instrument on the Aqua satellite show the maximum sea ice extent for 2008-09, which occurred on Feb. 28, 2009. Credit: NASA Goddard's Scientific Visualization Studio
> Larger image 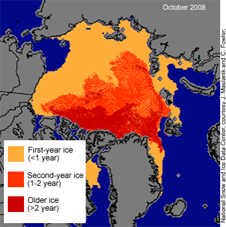 During the winter, winds and currents push some of the thick, multi-year ice out of the Arctic Ocean. In the past, that thicker ice was replenished by new ice that survived several summer melt seasons. Credit: Chuck Fowler and Jim Maslanik, University of Colorado, and NSIDC
> View animated GIF 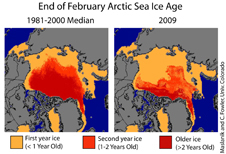 Maps show the relative age of Arctic sea ice at the end of February 2009 and over time. Thin, first-year ice is the predominant type covering the Arctic Ocean this winter. Credit: Chuck Fowler and Jim Maslanik, University of Colorado, and NSIDC
> Larger image 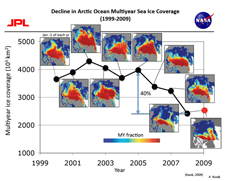 The decline in multiyear (including second-year ice) sea ice coverage has also been measured by NASA’s QuikScat satellite from 1999 to 2009. Each field shows the coverage on January 1 of that year. There is a 40 percent drop in coverage between 2005 and 2007. Credit: Ron Kwok, NASA/JPL
> Larger image The latest Arctic sea ice data from NASA and the National Snow and Ice Data Center show that the decade-long trend of shrinking sea ice cover is continuing. New evidence from satellite observations also shows that the ice cap is thinning as well.

Arctic sea ice works like an air conditioner for the global climate system. Ice naturally cools air and water masses, plays a key role in ocean circulation, and reflects solar radiation back into space. In recent years, Arctic sea ice has been declining at a surprising rate.

Scientists who track Arctic sea ice cover from space announced today that this winter had the fifth lowest maximum ice extent on record. The six lowest maximum events since satellite monitoring began in 1979 have all occurred in the past six years (2004-2009).

Until recently, the majority of Arctic sea ice survived at least one summer and often several. But things have changed dramatically, according to a team of University of Colorado, Boulder, scientists led by Charles Fowler. Thin seasonal ice -- ice that melts and re-freezes every year -- makes up about 70 percent of the Arctic sea ice in wintertime, up from 40 to 50 percent in the 1980s and 1990s. Thicker ice, which survives two or more years, now comprises just 10 percent of wintertime ice cover, down from 30 to 40 percent.

The Arctic ice cap grows each winter as the sun sets for several months and intense cold sets in. Some of that ice is naturally pushed out of the Arctic by winds, while much of it melts in place during summer. The thicker, older ice that survives one or more summers is more likely to persist through the next summer.

Sea ice thickness has been hard to measure directly, so scientists have typically used estimates of ice age to approximate its thickness. But last year a team of researchers led by Ron Kwok of NASA's Jet Propulsion Laboratory in Pasadena, Calif., produced the first map of sea ice thickness over the entire Arctic basin.

The older, thicker sea ice is declining and is being replaced with newer, thinner ice that is more vulnerable to summer melt, according to Kwok. His team found that seasonal sea ice averages about 6 feet in thickness, while ice that had lasted through more than one summer averages about 9 feet, though it can grow much thicker in some locations near the coast.

Kwok is currently working to extend the ICESat estimate further, from 2003 to 2008, to see how the recent decline in the area covered by sea ice is mirrored in changes in its volume.

"With these new data on both the area and thickness of Arctic sea ice, we will be able to better understand the sensitivity and vulnerability of the ice cover to changes in climate," Kwok said.