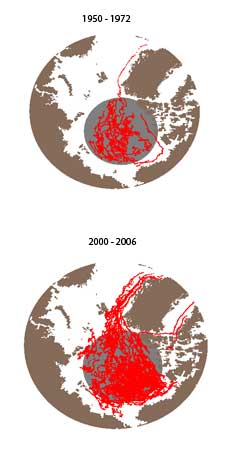 > Larger image
Data from Arctic buoys reporting surface air temperatures and sea level pressure were used to create sparse storm tracks from 1950 to 1972. Buoys also captured the data used to create the more abundant storm tracks from 2000 to 2006. Credit: NASA.
A new NASA study shows that the rising frequency and intensity of arctic storms over the last half century, attributed to progressively warmer waters, directly provoked acceleration of the rate of arctic sea ice drift, long considered by scientists as a bellwether of climate change.

NASA researcher Sirpa Hakkinen of Goddard Space Flight Center in Greenbelt, Md., and colleagues from Woods Hole Oceanographic Institution, Woods Hole, Mass., and the Arctic and Antarctic Research Institute, St. Petersburg, Russia, set out to confirm a long-standing theory derived from model results that a warming climate would cause an increase in storminess. Their observational approach enabled them to not only link climate to storminess, but to also connect increasing trends in arctic storminess and the movement of arctic ice -- the frozen ocean water that floats on the Arctic's surface. Results from their study as well as what they could mean for future climate change appeared this month in the American Geophysical Union's Geophysical Research Letters.

"Gradually warming waters have driven storm tracks -- the ocean paths in the Atlantic and Pacific along which most cyclones travel -- northward. We speculate that sea ice serves as the 'middleman' in a scenario where increased storm activity yields increased stirring winds that will speed up the Arctic's transition into a body of turbulently mixing warm and cool layers with greater potential for deep convection that will alter climate further," said Hakkinen. "What I find truly intriguing about confirming the link between the rise in storminess and increased sea ice drift is the possibility that new sinks for carbon dioxide may emerge from this relationship that could function as negative feedback for global warming."

Hakkinen and colleagues analyzed 56 years of storm track data from earlier studies and annual data on atmospheric wind stress, an established indicator of storm activity, that is generated by the National Center for Atmospheric Research in Boulder, Colo. The data confirmed an accelerating trend in storm activity in the Arctic from 1950 to 2006. Acknowledging ice as a harbinger of climate change, they next analyzed ice drift data collected during the same 56-year period from drifting stations and after 1979 from drifting buoys positioned around the Arctic that measured surface air temperature and sea level pressure.

> Click to view animation (6 Mb)
Pushed along by surface winds, sea ice is constantly in motion, as seen in this animation produced from observations by the AMSR-E instrument aboard NASA's Aqua satellite in 2005-2006. Credit: NASA The team found that the pace of sea ice movement along the Arctic Ocean's Transpolar Drift Stream from Siberia to the Atlantic Ocean accelerated in both summer and winter during the 55-year period. The accelerating pace of sea ice drift coincided with an increase in wind stress. Because the surface wind is known to be the "driving force" behind the movement of sea ice, they concluded that the increase in arctic storminess and the sea ice drift speeds are linked. The finding could reinforce the critical role changes in the Arctic Ocean play in global ocean circulation and climate change.

"Ice is a very simple medium. It really is highly responsive to atmospheric forcing, a great test bed for studies like ours. Sea ice is a bellwether of climate change," said Hakkinen. "Several analyses of sea level pressures suggest increased storm activity, but some of these reports are contradictory. We used a different approach to get to the bottom of this by looking at changes in wind stress and sea ice drift rather than sea level pressure as others had done. We identified a new trend -- an increase in the magnitude of surface wind stresses over the 56-year period that tells us that storm activity and sea ice movement are connected through a cause-and-effect relationship. We didn't have solid proof until now. This relationship holds major importance for the stability of the Arctic Ocean, and the mixing of warmer and cooler layers of its water."

The moving sea ice forces the ocean to move which sets off significantly more mixing of the upper layers of the ocean than would occur without the "push" from the ice. The increased mixing of the ocean layer forces a greater degree of ocean convection, and instability that offers negative feedback to climate warming. Globally, oceans absorb about 30 percent of the carbon dioxide carried by the atmosphere. According to the new findings by Hakkinen and her colleagues, the Arctic's capacity to absorb carbon dioxide could climb.

Hakkinen believes the study's approach also holds relevance for testing scientific computer models. "Twentieth century model simulations of storm activity and carbon dioxide scenario simulations from the last half century will be a test for climate change prediction models to see if they produce results in line with ours," she said.

"Although it remains to be seen how this may ultimately play out in the future, the likelihood this increasing trend and link between storminess and ice drift could expand the Arctic's role as a sink for extracting fossil fuel-generated carbon dioxide from the air is simply fascinating," said Hakkinen. "If it unfolds in the way we suppose, this scenario could, of course, affect the whole climate system and its evolution."