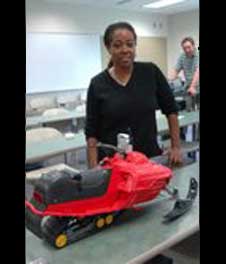 Project lead Ayanna Howard, a Georgia Tech engineering professor, poses with one of three SnoMote robots she co-designed in preparation for a field test in June on Mendenhall Glacier in Juneau, Alaska. Credit: University of Alaska Southeast/Alex Bogolepov Several snowmobiles navigated speedily over arctic ice and snow in Alaska's outback in late June. This scene might seem ordinary except that the recently unveiled snowmobiles are unmanned, autonomous, toy-size robots called SnoMotes – the first prototype network of their kind envisioned to rove treacherous areas of the Arctic and Antarctic capturing more accurate measurements that will help scientists better understand what is causing the well-documented melting of ice in those regions.

Ayanna Howard, an associate professor in the School of Electrical and Computer Engineering at the Georgia Institute of Technology in Atlanta, worked with scientists at Pennsylvania State University in State College, Pa., to create the toy-like robots. The robots are designed to traverse terrain often too dangerous for scientists, in pursuit of barometric pressure, temperature, and relative humidity measurements that will help scientists improve climate models. Howard, a former member of NASA's Mars technology program team who developed SmartNav, an autonomous, next-generation Mars rover, believed that science-driven robotics could be just as useful of a vehicle to new discoveries on Earth as it has been in the quest to learn more about Mars.

"After working with robots for the Mars technology program, I thought a similar type of rover could be used to collect multiple science measurements on this planet," said Howard. She is lead on the SnoMotes project funded by the Advanced Information Systems Technology program in NASA's Earth Science Technology Office, a NASA Headquarters office located at Goddard Space Flight Center in Greenbelt, Md. 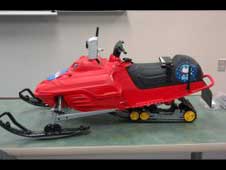 SnoMotes measure just two feet long and one foot wide, enabling their light weight bodies to traverse volatile terrain more effectively and without endangering scientists. Credit: University of Alaska Southeast/Alex Bogolepov "My research colleagues at Penn State agreed that we could possibly advance what we know about how changes in climate affect ice sheets and glaciers using robots to trek landscapes with volatile cracking or shifting ice where scientists have difficulty going to gather important measurements. The robots could also fill gaps in the existing network of satellites and weather station sensors that occurs due to immobility of the grounded station sensors or remote location and limited resolution of the satellites. Essentially, the robots could act as ‘mobile weather stations,' able to travel to capture real-time data at the spot where change is occurring."

In June, Howard and researchers from the University of Alaska Southeast in Juneau completed the first tests of the SnoMotes' capabilities on the Mendenhall Glacier in Juneau. To test the basic ability of the SnoMotes to navigate the terrain and communicate with the science console and the team's base, Howard and others released three SnoMotes into a multi-textured environment on the glacier that featured ice, deep snow, crevices and "sun cups," rough patches that develop when the sun partially melts icy areas.

“Though our analysis of the data from the field test will not be complete until this fall, the robots did well spanning the terrain without difficulty and we were able to communicate with them from the ‘base camp’ without any noticeable errors,” said Howard.

The current SnoMotes are a prototype of what Howard expects will be a full-scale system about twice the size of the current robots that are two feet long and one foot wide. With the intent to use low-cost materials, the three prototypes were developed from discontinued remote-controlled plastic snowmobile-shaped toys that Howard and her team adapted with sensors, microprocessors, and cameras for autonomy that expand upon rover innovations from Howard’s SmartNav robot developed for NASA in 2004. NASA's Earth Science Technology Office cultivates technologies like the SnoMotes that offer scientific measurements and practical applications that benefit society in tangible ways.

"This is the third rendition of the robot," said Howard. "In the development stage, I considered the nature of ice and snow and how people actually walk on both. The first version of the robot had legs. We then shifted to a hybrid leg and wheel design that allowed the wheels to maneuver out of snow patches if the legs became stuck. We finally thought about the other ways in which scientists travel on the icy arctic terrain, and decided to use a snowmobile-type design to solve the maneuverability problems."

Howard and colleagues Derrick Lampkin of Penn State and Magnus Egerstedt of Georgia Tech hope to create a low-cost final model of the SnoMotes that will be scalable into a network that institutions can use, with 30-40 mobile robots located across the Arctic. During future field tests on the next generation of SnoMotes, Howard plans to assess whether multiple SnoMotes can use advanced artificial intelligence skills and enhanced mobility to navigate at the same time, distinguish varying types of terrain, and communicate with one another, and whether a full set of finely-tuned sensors can capture barometric pressure, temperature, and relative humidity while also being durable enough to sustain extremely cold temperatures. To this end, Howard and her team have begun thinking of ways to add a heating mechanism to preserve the robots' sensitive internal instruments.

"With a comprehensive system that boasts a communications infrastructure, mobile sensors with moving data streams, plus existing weather stations and Global Positioning System measurements of glacier motion, the entire network will be able to alert scientists, in real time, about what may be happening, let's say, when an Arctic lake is draining," said Matt Heavner, director of the Southeast Alaska Monitoring Network for Science, Telecommunications, Education and Research at the University of Alaska Southeast in Juneau. Howard plans to work with Heavner to eventually broadcast SnoMote data on the Web for easy access by scientists.