September 2012 witnessed two opposite records concerning sea ice. Two weeks after the Arctic Ocean's ice cap experienced an all-time summertime low for the satellite era (left), Antarctic sea ice reached a record winter maximum extent (right). But sea ice in the Arctic has melted at a much faster rate than it has expanded in the Southern Ocean, as can be seen in this image by comparing the 2012 sea ice levels with the yellow outline, which in the Arctic image represents average sea ice minimum extent from 1979 through 2010 and in the Antarctic image shows the median sea ice extent in September from 1979 to 2000. Credit: NASA/Goddard Space Flight Center Scientific Visualization Studio and NASA Earth Observatory/ Jesse Allen
› View Arctic larger,   › View Antarctic larger

The steady and dramatic decline in the sea ice cover of the Arctic Ocean over the last three decades has become a focus of media and public attention. At the opposite end of the Earth, however, something more complex is happening.

A new NASA study shows that from 1978 to 2010 the total extent of sea ice surrounding Antarctica in the Southern Ocean grew by roughly 6,600 square miles every year, an area larger than the state of Connecticut. And previous research by the same authors indicates that this rate of increase has recently accelerated, up from an average rate of almost 4,300 square miles per year from 1978 to 2006.

"There's been an overall increase in the sea ice cover in the Antarctic, which is the opposite of what is happening in the Arctic,” said lead author Claire Parkinson, a climate scientist with NASA's Goddard Space Flight Center, Greenbelt, Md. "However, this growth rate is not nearly as large as the decrease in the Arctic.”

The Earth’s poles have very different geographies. The Arctic Ocean is surrounded by North America, Greenland and Eurasia. These large landmasses trap most of the sea ice, which builds up and retreats with each yearly freeze-and-melt cycle. But a large fraction of the older, thicker Arctic sea ice has disappeared over the last three decades. The shrinking summer ice cover has exposed dark ocean water that absorbs sunlight and warms up, leading to more ice loss.

On the opposite side of the planet, Antarctica is a continent circled by open waters that let sea ice expand during the winter but also offer less shelter during the melt season. Most of the Southern Ocean’s frozen cover grows and retreats every year, leading to little perennial sea ice in Antarctica.

Using passive-microwave data from NASA's Nimbus 7 satellite and several Department of Defense meteorological satellites, Parkinson and colleague Don Cavalieri showed that sea ice changes were not uniform around Antarctica. Most of the growth from 1978 to 2010 occurred in the Ross Sea, which gained a little under 5,300 square miles of sea ice per year, with more modest increases in the Weddell Sea and Indian Ocean. At the same time, the region of the Bellingshausen and Amundsen Seas lost an average of about 3,200 square miles of ice every year. 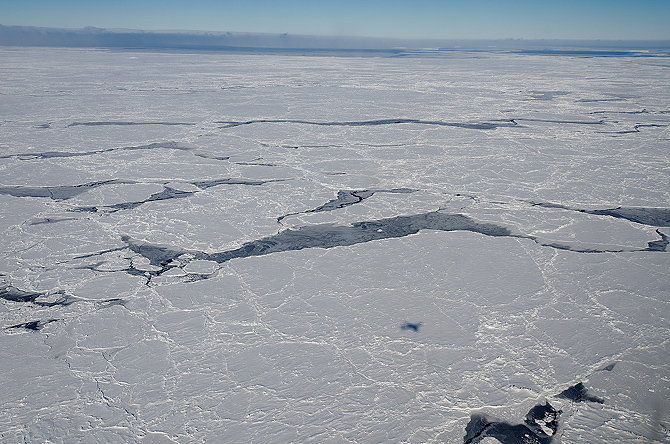 Parkinson and Cavalieri said that the mixed pattern of ice growth and ice loss around the Southern Ocean could be due to changes in atmospheric circulation. Recent research points at the depleted ozone layer over Antarctica as a possible culprit. Ozone absorbs solar energy, so a lower concentration of this molecule can lead to a cooling of the stratosphere (the layer between six and 30 miles above the Earth's surface) over Antarctica. At the same time, the temperate latitudes have been warming, and the differential in temperatures has strengthened the circumpolar winds flowing over the Ross Ice Shelf.

"Winds off the Ross Ice Shelf are getting stronger and stronger, and that causes the sea ice to be pushed off the coast, which generates areas of open water, polynyas,” said Josefino Comiso, a senior scientist at NASA Goddard. "The larger the coastal polynya, the more ice it produces, because in polynyas the water is in direct contact with the very cold winter atmosphere and rapidly freezes.” As the wind keeps blowing, the ice expands further to the north.

The numbers for the southernmost ocean, however, pale in comparison with the rates at which the Arctic has been losing sea ice – the extent of the ice cover of the Arctic Ocean in September 2012 was 1.32 million square miles below the average September extent from 1979 to 2000. The lost ice area is equivalent to roughly two Alaskas.

Parkinson said that the fact that some areas of the Southern Ocean are cooling and producing more sea ice does not disprove a warming climate.

"Climate does not change uniformly: The Earth is very large and the expectation definitely would be that there would be different changes in different regions of the world,” Parkinson said. "That's true even if overall the system is warming.” Another recent NASA study showed that Antarctic sea ice slightly thinned from 2003 to 2008, but increases in the extent of the ice balanced the loss in thickness and led to an overall volume gain.

The new research, which used laser altimetry data from the Ice, Cloud, and land Elevation Satellite (ICESat), was the first to estimate sea ice thickness for the entire Southern Ocean from space.

Records of Antarctic sea ice thickness are much patchier than those of the Arctic, due to the logistical challenges of taking regular measurements in the fierce and frigid waters around Antarctica. The field data collection is mostly limited to research icebreakers that generally only travel there during spring and summer – so the sole means to get large-scale thickness measurements is from space.

"We have a good handle of the extent of the Antarctic sea ice, but the thickness has been the missing piece to monitor the sea ice mass balance,” said Thorsten Markus, one of the authors of the study and Project Scientist for ICESat-2, a satellite mission designed to replace the now defunct ICESat. ICESat-2 is scheduled to launch in 2016. "The extent can be greater, but if the sea ice gets thinner, the volume could stay the same."