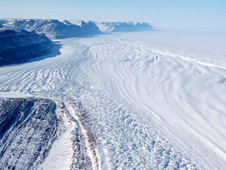 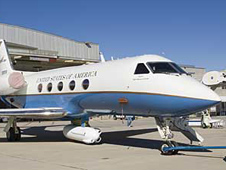 An underbelly pod housing a Synthetic Aperture Radar designed for use on unmanned aircraft is prepared for flight tests on NASA's Gulfstream III research testbed. NASA Dryden photo by Tom Tschida. PASADENA, Calif. - NASA will 'break the ice' on a pair of new airborne radars that can help monitor climate change when a team of scientists embarks this week on a two-month expedition to the vast, frigid terrain of Greenland and Iceland.

Scientists from NASA's Jet Propulsion Laboratory, Pasadena, Calif., and Dryden Flight Research Center, Edwards, Calif., will depart Dryden Friday, May 1, on a modified NASA Gulfstream III aircraft. In a pod beneath the aircraft's fuselage will be two JPL-developed radars that are flying test beds for evaluating tools and technologies for future space-based radars.

One of the radars, the L-band wavelength Uninhabited Aerial Vehicle Synthetic Aperture Radar, or UAVSAR, calibrates and supplements satellite data; the other is a proof-of-concept Ka-band wavelength radar called the Glacier and Land Ice Surface Topography Interferometer, or GLISTIN.

Both radars use pulses of microwave energy to produce images of Earth's surface topography and the deformations in it. UAVSAR detects and measures the flow of glaciers and ice sheets, as well as subtle changes caused by earthquakes, volcanoes, landslides and other dynamic phenomena. GLISTIN will create high-resolution maps of ice surface topography, key to understanding the stresses that drive changes in glacial regions.

During this expedition, UAVSAR will study the flow of Greenland's and Iceland's glaciers and ice streams, while GLISTIN will map Greenland's icy surface topography. About 250,000 square kilometers (97,000 square miles) of land will be mapped during 110 hours of data collection.

"We hope to better characterize how Arctic ice is changing and how climate change is affecting the Arctic, while gathering data that will be useful for designing future radar satellites," said UAVSAR Principal Investigator Scott Hensley of JPL.

The Gulfstream III flies at an altitude of 12,500 meters (41,000 feet) as UAVSAR collects data over areas of interest. The aircraft then flies over the same areas again, minutes to months later, using precision navigation to fly within 4.6 meters (15 feet) of its original flight path. By comparing the data from multiple passes, scientists can detect very subtle changes in Earth's surface.

L-band Principal Investigator Howard Zebker of Stanford University, Palo Alto, Calif., and his team will use UAVSAR to collect data on various types of ice. They will measure how deeply the L-band radar penetrates the ice and compare it with similar C- and X-band radar data collected from satellites. Scientists expect the longer wavelengths of the L-band radar to penetrate deeper into the ice than C-band radar, "seeing" ice motions or structures hundreds of meters below the ice surface, rather than only at the surface. By using both wavelengths, scientists hope to obtain a more complete picture of how glaciers and ice streams flow. Zebker's team will also evaluate how sensitive the L-band radar is to changes in the ice surface between observations.

To better predict how glaciers and ice sheets will evolve, scientists need to know what they're doing now, how fast they're changing, what processes drive the changes and how to represent them in models. Accurate measurements of ice sheet elevation derived from laser altimeters (lidars) on aircraft or satellites are critical to these efforts. But high-frequency microwave radars can also do the job, with greater coverage and the ability to operate in a wider range of weather conditions. Until now, however, microwave radars operating at wavelengths longer than those of GLISTIN have penetrated snow and ice more deeply than lidars, making interpretation of their data more complex.

Enter GLISTIN, the first demonstration of millimeter-wave interferometry, which was developed to support International Polar Year studies. Principal Investigator Delwyn Moller of Remote Sensing Solutions, Barnstable, Mass., and her team will evaluate GLISTIN's ability to map ice surface topography. GLISTIN has two receiving antennas, separated by about 25 centimeters (10 inches). This gives it stereoscopic vision and the ability to simultaneously generate both imagery and topographic maps. The topographic maps are accurate to within 10 centimeters (4 inches) of elevation on scales comparable to the ground footprint of a lidar on a satellite.

Scientists expect GLISTIN to penetrate the snow and ice by just centimeters, rather than by meters, as current microwave radars do. A multi-institutional team will conduct coordinated lidar and ground measurements to help quantify how deeply GLISTIN's Ka-band radar penetrates the snow and ice and to verify model predictions.

A joint partnership of JPL and Dryden, UAVSAR evolved from JPL's airborne synthetic aperture radar (AIRSAR) system that flew on NASA's DC-8 aircraft in the 1990s. In 2004, NASA's Earth Science Technology Office funded development of a more compact version of AIRSAR to be flown on uninhabited aerial vehicles. UAVSAR made its first operational flight in November 2008. JPL is managed for NASA by the California Institute of Technology in Pasadena.