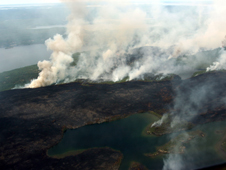 Image above: An aerial shot captures a heavy smoke plume from a boreal forest fire during last year’s Arctic Research of the Compositions of the Troposphere from Aircraft and Satellites (ARCTAS) mission. The mission sent instrument-equipped planes on flights throughout the Arctic in spring and summer to capture rich data on the composition of smoke, haze and industrial pollution from Asia, North America and Europe that makes its way to the Arctic and influences the rapidly warming climate there. Credit: NASA

A fleet of airplanes outfitted with sensors set out in the spring and summer of 2008 to study pollution in the Arctic atmosphere -- observing pollution from humans in the spring portion and from naturally occurring fires in the summer. Among other goals, the Arctic Research of the Composition of the Troposphere from Aircraft and Satellites (ARCTAS) field campaign sought to piece together a more detailed picture of how widespread forest fires above the Arctic Circle influence the rapid warming taking place at the north pole. Then all the smoke nearly got in the way.

The fire season in the spring turned out to be one of the most active in a long time, with about four times the activity than in recent years. How do researchers, looking for a good baseline on boreal fires’ typical impact in the Arctic, adapt to such a situation? Jim Crawford, manager of NASA’s Tropospheric Chemistry program, said that on one hand the unusual fire season wasn’t ideal for taking measurements of smoke, haze and pollution in the Arctic. But on the other hand, he added, the mission was to observe what was there, and researchers got a rare glimpse at intense fires. At the same time, the data that more than 130 people involved in ARCTAS collected on smoke plumes from these fires was able to corroborate some of what was known about the transport pathways that smoke and haze follow from northern Canada and Siberia. “Without these flights, we wouldn’t even be able to test certain models,” Crawford said. “We found that the models are quite good at modeling transport (of smoke plumes from boreal fires).”

Fire activity in the boreal forests of Canada and Siberia has been increasing in recent years, and many link this increase to climate change and a rapidly warming Arctic. Mean surface temperatures in the Arctic have increase more than two degrees Celsius in the past century, and the trend appears to be continuing. Boreal fires may not only be influenced by that warming, but the “black carbon” emissions created by burning may be settling to snow and ice surfaces in the Arctic, absorbing more heat and expediting ice melt.

Crawford delivered a briefing on this research as part of a symposium, "NASA Earth System Science at 20: Accomplishments, Plans and Challenges," sponsored by NASA’s Earth Science Division on June 24. NASA embarked on a revolutionary new mission for its Earth science program twenty years ago: to study our planet from space as an inter-related whole. For more information on his presentation or on the symposium, visit the following links.