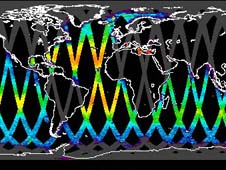 › View larger image
This image represents a simulation of a day's worth of sea surface salinity observations as planned to be made by the Aquarius instrument. Credit: NASA Aquarius Science Team/Aquarius Data Processing System With more than a few stamps on its passport, NASA's Aquarius instrument on the Argentinian Satélite de Aplicaciones Científicas (SAC)-D spacecraft will soon embark on its space mission to "taste" Earth's salty ocean.

After a journey of development and assembly through NASA facilities, a technology center in Bariloche, Argentina, and testing chambers in Brazil, the Aquarius instrument, set to measure the ocean's surface salinity, recently made the trip from São José dos Campos, Brazil, to California's Vandenberg Air Force Base for final integration and testing before its scheduled launch on June 9.

Aquarius will map the concentration of dissolved salt at the ocean's surface, information that scientists will use to study the ocean's role in the global water cycle and how this is linked to ocean currents and climate. Sea surface temperature has been monitored by satellites for decades, but it is both temperature and salinity that determine the density of the surface waters of the ocean. Aquarius will provide fundamentally new ocean surface salinity data to give scientists a better understanding of the density-driven circulation; how it is tied to changes in rainfall and evaporation, or the melting and freezing of ice; and its effect on climate variability.

"The ocean is essentially Earth's thermostat. It stores most of the heat, and what we need to understand is how do changes in salinity affect the 3-D circulation of the ocean," said Gene Feldman, Aquarius Ground System and Mission Operations Manager at NASA's Goddard Space Flight Center, Greenbelt, Md.

The photo slideshow highlights the international travels of the Aquarius satellite.


The development of the Aquarius mission began more than 10 years ago as a joint effort between Goddard and NASA's Jet Propulsion Laboratory (JPL) in Pasadena, Calif. In 2008, Goddard engineers completed the Aquarius microwave radiometer instrument, which is the key component for measuring salinity from space.

"The radiometer is the most accurate and stable radiometer built for sensing of Earth from space. It's a one-of-a-kind instrument," said Shannon Rodriguez-Sanabria, a microwave communications specialist at Goddard.

JPL built Aquarius' scatterometer instrument, a microwave radar sensor that scans the ocean's surface to measure the effect wind speed has on the radiometer measurements. The radiometer and scatterometer instruments, along with an 8.25-by-10-foot elliptical antenna reflector and many other systems, have been integrated together at JPL to form the complete Aquarius instrument. A number of other instruments aboard the SAC-D spacecraft are contributions from Argentina, France, Canada and Italy.

In June 2009, Aquarius was flown via a U.S. Air Force cargo jet to San Carlos de Bariloche, Argentina, a destination known for its natural scenery of blue lakes and verdant mountains, to be integrated with Argentina's SAC-D spacecraft. A year later, the fully assembled spacecraft and all the instruments now referred to as the "Aquarius/SAC-D Observatory" were shipped to Brazil. There, engineers began a nine-month campaign of alignment, electro-magnetic, vibration, and thermal vacuum testing to ensure it will survive the rigors of launch and orbiting in space.

Aquarius will collect data continuously as it flies in a near-polar orbit and circles Earth 14 to 15 times each day. The field of view of the instrument is 390 kilometers (242 miles) wide, and will provide a global map every seven days. The data will be compiled to generate more accurate monthly averages during the mission, which is designed to last a minimum of three years.