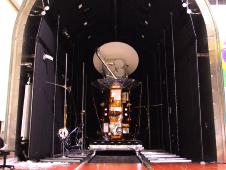 While most Americans are traveling to family gatherings this week for Thanksgiving, a team of scientists from NASA’s Jet Propulsion Laboratory, Pasadena, Calif., and the Goddard Space Flight Center in Greenbelt, Md., is flying down to Brazil to “cook” a salty NASA instrument that’s sure to spice up studies of Earth’s climate after its launch late next spring.

NASA’s Aquarius instrument and the Argentinian spacecraft that will carry it into space, the Satelite de Aplicaciones Cientificas (SAC-D), were moved into a thermal vacuum chamber at Brazil’s National Institute for Space Research (Laboratório de Integração e Testes – Instituto Nacional de Pesquisas Espaciais, or LIT-INPE) in Sáo José dos Campos on Nov. 15, in preparation for a series of environmental tests. The thermal vacuum tests will confirm the integrity of the spacecraft’s electrical connections and will subject the instruments and spacecraft to the extreme hot, cold and airless environment they will encounter once in orbit.

Aquarius/SAC-D is an international mission involving NASA and Argentina's space agency, Comisión Nacional de Actividades Espaciales. Aquarius, the JPL-built primary instrument on the mission, is designed to provide monthly global maps of how the concentration of dissolved salt (known as salinity) varies on the ocean surface. Salinity is a key tracer for understanding the ocean’s role in Earth’s water cycle and tracking and understanding ocean circulation.

By measuring ocean salinity from space, Aquarius will provide new insights into how the massive natural interplay of freshwater moving among the ocean, atmosphere and sea ice influences Earth’s ocean circulation, weather and climate.

The minimum three-year mission is scheduled to launch in late spring of 2011 from Vandenberg Air Force Base, Calif.