The newly mapped grounding line (blue) – where ice separates from land -- is more accurate than a previously mapped line (green) thanks to high-resolution satellite imagery that can better differentiate between the edge of the landmass and islands. Credit: NASA
› Larger image 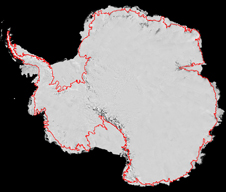 Researchers have connected 3,574,365 points around Antarctica, tracing the most accurate map of the continent's grounding line -- a 56,610-kilometer path that outlines where ice separates from the land. Credit: NASA
› Larger image Antarctica may not be the world's largest landmass -- it's the fifth-largest continent -- but resting on top of that land is the world's largest ice sheet. That ice holds more than 60 percent of Earth's fresh water and carries the potential to significantly raise sea level. The continent is losing ice to the sea, and scientists want to know how much.

Antarctica's ice generally flows from the middle of the continent toward the edge, dipping toward the sea before lifting back up and floating. The point where ice separates from land is called the "grounding line." For scientists, an accurate map of the grounding line is a first step toward a complete calculation of how much ice the continent is losing.

Such a map is a primary objective of the Antarctic Surface Accumulation and Ice Discharge (ASAID) project. Researchers from NASA's Goddard Space Flight Center in Greenbelt, Md., led a team that used high-resolution satellite images, along with newly developed computer software, to trace the most accurate Antarctic grounding line ever compiled.

Much public attention has been focused on the Arctic, where ice loss is accelerating. Antarctica, however, is also steadily losing ice. NASA satellites have shown ice losses around the entire continent, with pronounced changes in the northern region around the Antarctic Peninsula. The most significant changes are likely to occur at the intersection of the ocean and the ice sheets.

The rest of the coastline might lose ice through icebergs that calve off from outlet glaciers or over land cliffs. Sometimes ice flows gently from glaciers that extend far into the ocean as floating ice shelves or skinnier ice tongues. In other cases, the ice never reaches the ocean at all.

To draw the new grounding line, the team of NASA and international scientists worked with a mosaic of high-resolution images of the continent from the Landsat 7 satellite. Using software developed by Goddard's Hyeungu Choi, the team collated and mapped points from previously mapped lines, high-resolution imagery, and some new information about surface elevation.

"Completion of this line was huge, as we connected 3.5 million geographic points around the continent," said Goddard's Amy Wichlacz, who popped a cork in celebration after eight months of meticulously connecting the dots.

The team found that the grounding line around the edge of the ice sheet follows a winding path 53,610 kilometers (~33,312 miles) long. The high-resolution imagery makes the new map more precise than previous assessments of grounding lines, which sometimes mistakenly included shadows and islands as part of the continental landmass.

The next step is to use satellite elevation data from ICESat to determine the ice thickness near the grounding line.

The new map and elevation data, along with thickness information (once complete), will be turned over to the National Snow and Ice Data Center in Boulder, Colo. Knowing where ice leaves the land, combined with the thickness of ice in the vicinity and speed of the ice, allows scientists to calculate how much ice is being lost.

Time on the Shelf
http://earthobservatory.nasa.gov/Features/TimeShelf/