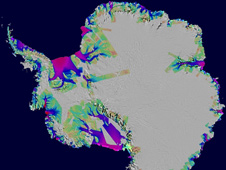 Antarctic ice loss between 1996 and 2006, overlaid on a Moderate Resolution Imaging Spectroradiometer (MODIS) mosaic image of Antarctica. The colors indicate the speed of the ice loss. Purple/red is fast. Green is slow. Image credit: NASA
›  Larger view
PASADENA, Calif. - Ice loss in Antarctica increased by 75 percent in the last 10 years due to a speed-up in the flow of its glaciers and is now nearly as great as that observed in Greenland, according to a new, comprehensive study by NASA and university scientists.

In a first-of-its-kind study, an international team led by Eric Rignot of NASA's Jet Propulsion Laboratory, Pasadena, Calif., and the University of California, Irvine, estimated changes in Antarctica's ice mass between 1996 and 2006 and mapped patterns of ice loss on a glacier-by-glacier basis. They detected a sharp jump in Antarctica's ice loss, from enough ice to raise global sea level by 0.3 millimeters (.01 inches) a year in 1996, to 0.5 millimeters (.02 inches) a year in 2006.

Rignot said the losses, which were primarily concentrated in West Antarctica's Pine Island Bay sector and the northern tip of the Antarctic Peninsula, are caused by ongoing and past acceleration of glaciers into the sea. This is mostly a result of warmer ocean waters, which bathe the buttressing floating sections of glaciers, causing them to thin or collapse. "Changes in Antarctic glacier flow are having a significant, if not dominant, impact on the mass balance of the Antarctic ice sheet," he said.

To infer the ice sheet's mass, the team measured ice flowing out of Antarctica's drainage basins over 85 percent of its coastline. They used 15 years of satellite radar data from the European Earth Remote Sensing-1 and -2, Canada's Radarsat-1 and Japan's Advanced Land Observing satellites to reveal the pattern of ice sheet motion toward the sea. These results were compared with estimates of snowfall accumulation in Antarctica's interior derived from a regional atmospheric climate model spanning the past quarter century.

The team found that the net loss of ice mass from Antarctica increased from 112 (plus or minus 91) gigatonnes a year in 1996 to 196 (plus or minus 92) gigatonnes a year in 2006. A gigatonne is one billion metric tons, or more than 2.2 trillion pounds. These new results are about 20 percent higher over a comparable time frame than those of a NASA study of Antarctic mass balance last March that used data from the NASA/German Aerospace Center Gravity Recovery and Climate Experiment. This is within the margin of error for both techniques, each of which has its strengths and limitations.

"Our new results emphasize the vital importance of continuing to monitor Antarctica using a variety of remote sensing techniques to determine how this trend will continue and, in particular, of conducting more frequent and systematic surveys of changes in glacier flow using satellite radar interferometry," Rignot said. "Large uncertainties remain in predicting Antarctica's future contribution to sea level rise. Ice sheets are responding faster to climate warming than anticipated."

Rignot said scientists are now observing these climate-driven changes over a significant fraction of the West Antarctic Ice Sheet, and the extent of the glacier ice losses is expected to keep rising in the years to come. "Even in East Antarctica, where we find ice mass to be in near balance, ice loss is detected in its potentially unstable marine sectors, warranting closer study," he said.

Results of the study are published in February's issue of Nature Geoscience.