At a depth of 600 feet beneath the West Antarctic ice sheet, a small shrimp-like creature managed to brighten up an otherwise gray polar day in November 2009. Bob Bindschadler of NASA's Goddard Space Flight Center, Greenbelt, Md., remembers the day well. He and his team were on a joint NASA-National Science Foundation expedition to examine the underside of the ice sheet when they found the pinkish-orange creature swimming beneath the ice.

"We were like little kids huddling around, just oohing and aahing at this little creature swimming around and giving us a little show," said Bindschadler. "It was the thrill of discovery that made us giddy; just totally unexpected."

The complex critter was identified as a Lyssianasid amphipod, about three inches in length. It was found beneath the 180-meter (590-foot) thick Ross Ice Shelf in Windless Bight, 20 miles northeast of McMurdo Station. Bindschadler and his team drilled an eight-inch diameter hole through the ice so that Alberto Behar of NASA's Jet Propulsion Laboratory, Pasadena, Calif., could submerge a small camera to obtain what are believed to be the first images of the underbelly of an ice shelf. 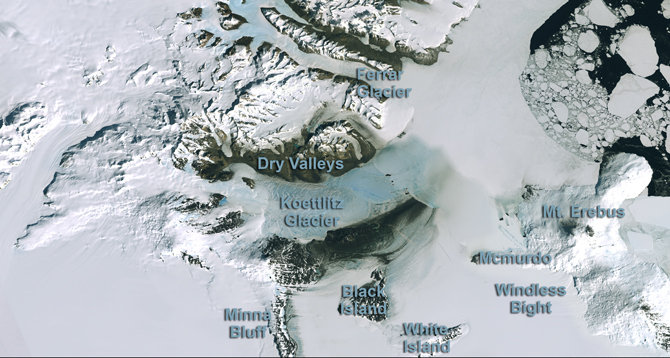 Windless Bight is more than 12 miles from open water, even in the Antarctic summer – not exactly where one would expect to find sophisticated aquatic life-forms swimming beneath a layer of ice nearly 600 feet thick. This map shows the location of the drill site overlaid on NASA's Landsat Image Mosaic of Antarctica. Credit: NASA/Goddard's Scientific Visualization Studio
› Larger image (23 MB tif)

"This is the first time we've had a camera able to look back up at the ice. This probe is an upgrade to the original. It has three cameras – down, side and back-looking. The back-looking camera saw the shrimp-like animal," said Behar. The drilling in Windless Bight was part of the team's preparation for upcoming field studies 1000 miles from McMurdo where the Pine Island ice shelf is rapidly thinning and Antarctic ice is swiftly sliding off the continent, raising sea level. Bindschadler and his team want to find out why.

Behar designed the original NASA borehole camera apparatus in 1999. It's now seen six deployments with British, Australian and American science teams in Antarctica, Greenland and Alaska. He'll take this new camera rig to Pine Island with Bindschadler and others, and hopes to eventually probe into Antarctica's mysterious sub-glacial lakes. There he'll attach a fiber-optically tethered micro-submarine with high-resolution camera, "so we can swim within the lake." 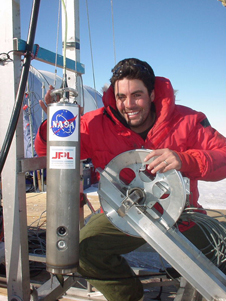 NASA-JPL researcher Alberto Behar designed his borehole camera in 1999 to explore water deep beneath polar ice. The latest model of this camera includes the back-looking camera responsible for spotting the shrimp-like creature in 2009. Credit: NASA-JPL/CalTech/Behar
› Larger image The rig, originally developed by NASA, has proven to be invaluable to science teams around the world. "We wouldn't be able to use it in the places we've gone without collaboration with the National Science Foundation and our British and Australian partners, among many others," said Behar. "When we get to Pine Island we'll be able to look at the sea floor. We couldn't do it this time because the cavity was deeper than we expected, but we'll have a kilometer of cable at Pine Island."

It's not unusual to find amphipods and other marine life in Antarctic waters. The complex circulatory system of the surrounding ocean brings warm, salty, nutrient-rich water towards the Antarctic continent, helping to sustain life even in the cold, dark winter. When the Larsen B ice shelf collapsed in 2002, scientists discovered clams and bacterial mats, or large aggregations of bacteria, half a mile below the ocean surface. Even within their average temperature range of -1.8 to 1 degree Celsius (28.7 to 33.8 Fahrenheit), Antarctic waters are teeming with life.

"The ocean flows under ice sheets, and where there is exchange of water with the open ocean, there will be microbes and other food resources for larger animals such as jellyfish and amphipods," according to Peter Wiebe, a biologist from the Woods Hole Oceanographic Institution in Woods Hole, Mass., who studies marine life in the waters around West Antarctica.

But for a group of glaciologists, a familiar face was the last thing they expected to see below the ice and so far from the open ocean. "We thought we were just going into a deep, dark cold water hole and never anticipated we'd see any life," Bindshadler added. "The color was what caught our eyes."

The science team -- with members from the University of Alaska, Fairbanks; the Naval Postgraduate School, Monterey, Calif.; and Moss Landing Marine Laboratories, Monterey -- is now analyzing temperature, salinity and current data from the sub-glacial watering hole to understand if the comfortable conditions for this shrimp-like creature are typical.

NASA-funded scientists have long studied life in extreme environments. From astrobiology to extremeophiles and survivophiles, the search for life in harsh places has led to a smorgasbord of discoveries seemingly ripped from the pages of science fiction. The Antarctic amphipod has gotten scientists talking again: if life-forms as complex as these can survive deep within sub-glacial waters could they survive in other unusual and unfriendly environments in space?

Behar, also known for his work on robotic exploration of Mars, remarked, "The real benefit of these exploration programs is that you go in not knowing what you're going to find and you get surprised. It makes it worth all the trouble putting everything together when you find something new that you didn't expect."

Preliminary findings and video footage will be presented today at the American Geophysical Union Chapman Conference on the Exploration and Study of Antarctic Subglacial Aquatic Environments in Baltimore, Md.