As parts of Central America and the U.S. Southwest endure some of the worst droughts to hit those areas in decades, scientists have unearthed new evidence about ancient dry spells that suggest the future could bring even more serious water shortages. Three researchers speaking at the annual meeting of the American Geophysical Union in San Francisco on Dec. 5, 2011, presented new findings about the past and future of drought.

Ben Cook, a climatologist affiliated with NASA's Goddard Institute for Space Studies (GISS) and Columbia University's Lamont-Doherty Earth Observatory in New York City, highlighted new research that indicates the ancient Meso-American civilizations of the Mayans and Aztecs likely amplified droughts in the Yucatán Peninsula and southern and central Mexico by clearing rainforests to make room for pastures and farmland.

Converting forest to farmland can increase the reflectivity, or albedo, of the land surface in ways that affect precipitation patterns. "Farmland and pastures absorb slightly less energy from the sun than the rainforest because their surfaces tend to be lighter and more reflective," explained Cook. "This means that there’s less energy available for convection and precipitation." 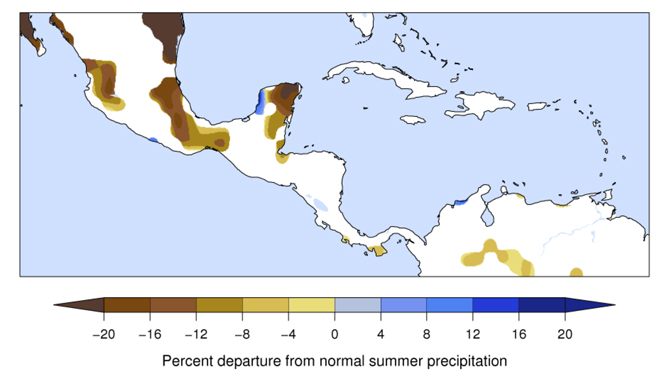 New climate modeling shows that widespread deforestation in pre-Columbian Central America corresponded with decreased levels of precipitation. This image shows how much precipitation declined from normal across the region between 800 C.E. and 950 C.E. It was during this period of time that the Mayan civilization reached its peak population and abruptly collapsed. (Credit: Ben Cook, NASA’s Goddard Institute for Space Studies)
› Larger image

Cook and colleagues used a high-resolution climate model developed at GISS to run simulations that compared how patterns of vegetation cover during pre-Columbian (before 1492 C.E.) and post-Columbian periods affected precipitation and drought in Central America. The pre-Columbian era saw widespread deforestation on the Yucatán Peninsula and throughout southern and central Mexico. During the post-Columbian period, forests regenerated as native populations declined and farmlands and pastures were abandoned.

Cook's simulations include input from a newly published land-cover reconstruction that is one of the most complete and accurate records of human vegetation changes available. The results are unmistakable: Precipitation levels declined by a considerable amount -- generally 10 to 20 percent -- when deforestation was widespread. Precipitation records from stalagmites, a type of cave formation affected by moisture levels that paleoclimatologists use to deduce past climate trends, in the Yucatán agree well with Cook's model results.

The effect is most noticeable over the Yucatán Peninsula and southern Mexico, areas that overlapped with the centers of the Mayan and Aztec civilizations and had high levels of deforestation and the most densely concentrated populations. Rainfall levels declined, for example, by as much as 20 percent over parts of the Yucatán Peninsula between 800 C.E. and 950 C.E.

Cook's study supports previous research that suggests drought, amplified by deforestation, was a key factor in the rapid collapse of the Mayan empire around 950 C.E. In 2010, Robert Oglesby, a climate modeler based at the University of Nebraska, published a study in the Journal of Geophysical Research that showed that deforestation likely contributed to the Mayan collapse. Though Oglesby and Cook's modeling reached similar conclusions, Cook had access to a more accurate and reliable record of vegetation changes.

During the peak of Mayan civilization between 800 C.E. and 950 C.E., the land cover reconstruction Cook based his modeling on indicates that the Maya had left only a tiny percentage of the forests on the Yucatán Peninsula intact. By the period between 1500 C.E. and 1650 C.E., in contrast, after the arrival of Europeans had decimated native populations, natural vegetation covered nearly all of the Yucatán. In modern times, deforestation has altered some areas near the coast, but a large majority of the peninsula’s forests remain intact. 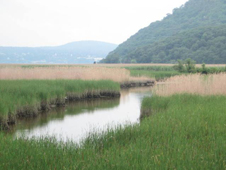 By analyzing sediment cores collected from several tidal marshes in the Hudson River Valley, Peteet and her colleagues at Lamont-Doherty have found evidence that at least three major dry spells have occurred in the Northeast within the last 6,000 years. The longest, which corresponds with a span of time known as the Medieval Warm Period, lasted some 500 years and began around 850 C.E. The other two took place more than 5,000 years ago. They were shorter, only about 20 to 40 years, but likely more severe.

"People don't generally think about the Northeast as an area that can experience drought, but there's geologic evidence that shows major droughts can and do occur," Peteet said. "It's something scientists can't ignore. What we’re finding in these sediment cores has big implications for the region."

Peteet's team detected all three droughts using a method called X-ray fluorescence spectroscopy. They used the technique on a core collected at Piermont Marsh in New York to search for characteristic elements -- such as bromine and calcium -- that are more likely to occur at the marsh during droughts.

Fresh water from the Hudson River and salty water from the Atlantic Ocean were both predominant in Piermont Marsh at different time periods, but saltwater moves upriver during dry periods as the amount of fresh water entering the marsh declines. Peteet's team detected extremely high levels of both bromine and calcium, both of them indicators of the presence of saltwater and the existence of drought, in sections of the sediment cores corresponding to 5,745 and 5,480 years ago.

"We still need to do more research before we can say with confidence how widespread or frequent droughts in the Northeast have been," Peteet said. There are certain gaps in the cores Peteet's team studied, for example, that she plans to investigate in greater detail. She also expects to expand the scope of the project to other marshes and estuaries in the Northeast and to collaborate with climate modelers to begin teasing out the factors that cause droughts to occur in the region.

The Future of Food 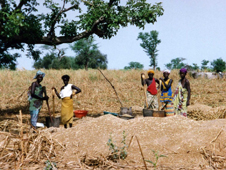 New modeling demonstrates that parts of Africa will be among the areas hardest hit by changes in agricultural productivity due to droughts driven by climate change. Here women in Senegal take a break from crushing millet. Credit: Molly Brown, NASA's Goddard Space Flight Center
› Larger image Climate change, with its potential to redistribute water availability around the globe by increasing rainfall in some areas while worsening drought in others, might negatively impact crop yields in certain regions of the world.

New research conducted by Princeton University hydrologist Justin Sheffield shows that areas of the developing world that are drought-prone and have growing population and limited capabilities to store water, such as sub-Saharan Africa, will be the ones most at risk of seeing their crops decrease their yields in the future.

Sheffield and his team ran hydrological model simulations for the 20th and 21st centuries and looked at how drought might change in the future according to different climate change scenarios. They found that the total area affected by drought has not changed significantly over the past 50 years globally.

However, the model shows reductions in precipitation and increases in evaporative demand are projected to increase the frequency of short-term droughts. They also found that the area across sub-Saharan Africa experiencing drought will rise by as much as twofold by mid-21st century and threefold by the end of the century.

When the team analyzed what these changes would mean for future agricultural productivity around the globe, they found that the impact on sub-Saharan Africa would be especially strong.

Agricultural productivity depends on a number of factors beyond water availability including soil conditions, available technologies and crop varieties. For some regions of sub-Saharan Africa, the researchers found that agricultural productivity will likely decline by over 20 percent by mid-century due to drying and warming. Adam Voiland and Maria José-Viñas
NASA's Goddard Space Flight Center
› Back To Top