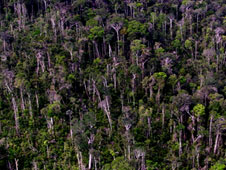 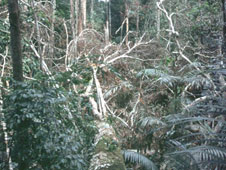 A downed tree stretches across the Amazon forest floor in an area near Manaus, Brazil, where many trees were felled by a powerful 2005 storm.
Image credit: Jeffrey Chambers, Tulane University
› Larger view 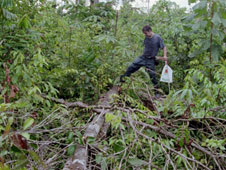 Study co-author Giuliano Guimaraes of the National Institute for Amazonian Research, Manaus, Brazil, examines a fallen tree in an area where trees were blown down by a storm in the Amazon forest.
Image credit: Jeffrey Chambers, Tulane University
› Larger view

A single, huge, violent storm that swept across the whole Amazon forest in 2005 killed half a billion trees, according to a new study funded by NASA and Tulane University, New Orleans.

While storms have long been recognized as a cause of Amazon tree loss, this study is the first to actually quantify losses from a storm. And the losses are much greater than previously suspected, say the study's authors, which include research scientist Sassan Saatchi of NASA’s Jet Propulsion Laboratory, Pasadena, Calif. The work suggests that storms may play a larger role in the dynamics of Amazon forests than previously recognized, they add.

Previous research had attributed a peak in tree mortality in 2005 solely to a severe drought that affected parts of the forest. The new study says that a single squall line (a long line of severe thunderstorms, the kind associated with lightning and heavy rainfall) had an important role in the tree demise. Research suggests this type of storm might become more frequent in the future in the Amazon due to climate change, killing a higher number of trees and releasing more carbon to the atmosphere.

Tropical thunderstorms have long been suspected of wreaking havoc in the Amazon, but this is the first time researchers have calculated how many trees a single thunderstorm can kill, says Jeffrey Chambers, a forest ecologist at Tulane University and one of the authors of the paper. The paper has been accepted for publication in Geophysical Research Letters, a journal of the American Geophysical Union.

Previous studies by a coauthor of this new paper, Niro Higuchi of Brazil's National Institute for Amazon Research (INPA), showed the 2005 tree mortality spike was the second largest recorded since 1989 for the Manaus region in the Central Amazon. Also in 2005, large parts of the Amazon forest experienced one of the harshest droughts of the last century. A study published in the journal Science in 2009 pointed to the drought as the single agent for a basin-wide increase in tree mortality. But a very large area with major tree loss (the region near Manaus) was not affected by the drought.

"We can't attribute [the increased] mortality to just drought in certain parts of the basin--we have solid evidence that there was a strong storm that killed a lot of trees over a large part of the Amazon," Chambers says.

From Jan. 16 to 18, 2005, a squall line 1,000 kilometers (620 miles) long and 200 kilometers (124 miles) wide crossed the whole Amazon basin from southwest to northeast, causing several human deaths in the cities of Manaus, Manacaparu, and Santarem. The strong vertical winds associated with the storm, blowing up to 145 kilometers per hour (90 miles per hour), uprooted or snapped in half trees that were in their path. In many cases, the stricken trees took down some of their neighbors when they fell.

The researchers used a combination of Landsat satellite images, field-measured tree mortality, and modeling to determine the number of trees killed by the storm. By linking satellite data to observations on the ground, the researchers were able to take into account smaller tree blowdowns (less than 10 trees) that otherwise cannot be detected through satellite images.

Looking at satellite images for the area of Manaus from before and after the storm, the researchers detected changes in the reflectivity of the forest, which they suspected were indicative of tree losses. Undisturbed forest patches appeared as closed, green canopy in satellite images. When trees die and fall, a clearing opens, exposing wood, dead vegetation, and surface litter. This so-called "woody signal" only lasts for about a year in the Amazon. In a year, vegetation re-grows and covers the exposed wood and soil. This means the signal is a good indicator of recent tree deaths.

After seeing disturbances in the satellite images, the researchers established five field sites in one of the blowdown areas, and counted the number of trees that had been killed by the storm; researchers can usually tell what killed a tree from looking at it.

"If a tree dies from a drought, it generally dies standing. It looks very different from trees that die snapped by a storm," Chambers says.

In the most affected plots, near the centers of large blowdowns, up to 80 percent of the trees had been killed by the storm.

By comparing their field data and the satellite observations, the researchers determined that the satellite images were accurately pinpointing areas of tree death, and they calculated that the storm had killed between 300,000 and 500,000 trees in the area of Manaus. The number of trees killed by the 2005 storm is equivalent to 30 percent of the annual deforestation in that same year for the Manaus region, which experiences relatively low rates of deforestation.

The team then extrapolated the results to the whole Amazon basin.

"We know that the storm was intense and went across the basin," Chambers says. "To quantify the potential basin-wide impact, we assumed that the whole area impacted by the storm had a similar level of tree mortality as the mortality observed in Manaus."

The researchers estimate that between 441 and 663 million trees were destroyed across the whole basin. This represents a loss equivalent to 23 percent of the estimated mean annual carbon accumulation of the Amazon forest.

Squall lines that move from southwest to northeast of the forest, like the one in January 2005, are relatively rare and poorly studied, says Robinson Negron-Juarez, an atmospheric scientist at Tulane University, and lead author of the study. Storms that are similarly destructive but advance in the opposite direction (from the northeast coast of South America to the interior of the continent) occur up to four times per month. They can also generate large forest blowdowns (contiguous patches of wind-toppled trees), although it's infrequent that either of these two types of storms crosses the whole Amazon.

"We need to start measuring the forest perturbation caused by both types of squall lines, not only by the ones coming from the south," Negron-Juarez says. "We need that data to estimate total biomass loss from these natural events, which has never been quantified."

Chambers says that authors of previous studies on tree mortality in the Amazon have diligently collected dead-tree tolls, but information on exactly what killed the trees is often lacking, or not reported.

"It's very important that when we collect data in the field, we do forensics on tree mortality," says Chambers, who has been studying forest ecology and carbon cycling in the Amazon since 1993. "Under a changing climate, some forecasts say that storms will increase in intensity. If we start seeing increases in tree mortality, we need to be able to say what's killing the trees."