With missions scheduled throughout the year, 2012 is shaping up to be an extraordinary time for NASA’s Airborne Science Program and Earth system science research. Multiple aircraft and specialized instruments will operate in the United States, Europe, Asia and South America this year in support of studies conducted by NASA and the Earth science community, improving scientists' understanding of our planet.

The program maintains a fleet of highly modified aircraft and specialized instruments that can be deployed all over the world for Earth science missions. Researchers use these aircraft and sensors to obtain high-resolution measurements of local phenomena and processes, such as ice sheet thicknesses, precipitation and air quality. These measurements are often combined with global satellite observations and ground sampling to better model and understand the complete Earth system. The Airborne Science Program and flight campaigns play a key role in the development of both hardware and algorithms for future satellite missions.

The aircraft provide scientists with access to unique capabilities, including high-altitude and long-duration flights, and the ability to fly large payloads and multiple instruments to nearly anywhere at any time. NASA's Airborne Science aircraft and sensors offer the science community the ability to collect data from Earth's surface to 70,000 feet in altitude. These unique assets add another research dimension to ground and satellite measurements.

"NASA's Airborne Science support of the Earth system science community will be exceptional in 2012," said Randy Albertson, NASA Airborne Science deputy program director. "Not only is the program on track to exceed the 2011 record of 2,600 hours flying science missions, the growth in new sensor integrations means NASA is well poised to conduct more accurate and complex airborne science in the future."

Below are descriptions and links to more information about NASA's 2012 airborne science missions:

Snowfall in Canada
The Global Precipitation Measurement Cold-season Precipitation Experiment, or GCPEx, is measuring light rain and snow in Ontario, Canada, through late February. NASA is flying a DC-8 airborne science laboratory above Canadian snowstorms to tackle a difficult challenge facing the upcoming Global Precipitation Measurement (GPM) satellite mission: measuring snowfall from space. GPM, due to launch in 2013, will set a new standard for precipitation measurements from space, providing next-generation observations of worldwide rain and snow every three hours. Falling snow is critically important in terms of freshwater resources, atmospheric water and energy cycles, and ecosystems. The GCPEx mission is using instrumented aircraft -- the NASA DC-8, NASA-funded University of North Dakota Cessna Citation, and a Canadian National Research Council Convair 580 -- for flights over sensors located in and around the Environment Centre for Atmospheric Research Experiments in Egbert, Ontario. 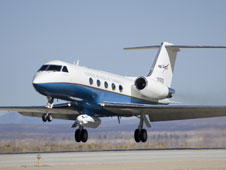 The G-III returned to Hawaii in January for a third study of volcanoes, including the Kilauea volcano on the Big Island, intended to help scientists better understand processes occurring under Earth’s surface.

The UAVSAR imaged the surface deformation caused by the 2010 Mayor-Cucapah earthquake in Baja California, Mexico. Flights were flown from the Dryden Aircraft Operations Facility in Palmdale, Calif., between late January and early February. This study will be repeated in May, July and November.

The sensor will gather data about volcanoes and glaciers during a June deployment to Iceland. The return flight to Palmdale, Calif., will include imaging of the BP oil spill area of the Gulf Coast.

Volcanoes in Alaska, including the Aleutian Island chain, and the Cascade Range of California, Oregon and Washington will be the focus of an August study.

A second G-III is being fitted with the UAVSAR this year to support subsurface and subcanopy soil moisture measurements for the AirMOSS mission.

LIDAR Study of Greenland's Ice
The Multiple Altimeter Beam Experimental LIDAR, or MABEL, will be mounted in the nose of a NASA high-altitude ER-2 for an April deployment to study Greenland’s ice sheet, glaciers and sea ice. MABEL is a primary sensor candidate for NASA’s Ice, Cloud, Land Elevation Satellite-2 (ICESat-2) mission scheduled to launch in 2016. An ER-2 based in Iceland will carry the sensor to altitudes of 65,000 feet, gathering algorithm development data that may allow ICESat-2 to make more precise measurements of global ice. The timing of this mission coincides with the deployment of NASA's P-3B to Greenland for Operation IceBridge.

Operation IceBridge
IceBridge, a six-year NASA mission, is the largest airborne survey of Earth's polar ice. Data collected during IceBridge will help scientists bridge the gap in polar ice observations between NASA's Ice, Cloud and Land Elevation Satellite (ICESat) and ICESat-2, planned for launch in 2016. ICESat stopped collecting science data in 2009, making IceBridge critical for ensuring a continuous series of observations of Earth’s changing polar ice. Two IceBridge deployments are planned for 2012. The Arctic deployment, based in Thule and Kangerlussuaq, Greenland, and Fairbanks, Alaska, will occur March through May and use NASA’s P-3B airborne laboratory and NASA’s B-200. The Antarctic deployment, based in Punta Arenas, Chile, will use NASA’s DC-8 airborne laboratory in October and November.

Arctic Carbon Measurements
The Carbon in Arctic Reservoirs Vulnerability Experiment, or CARVE, mission will be based in Alaska and take place in the spring, summer and early fall. CARVE will collect detailed measurements of important greenhouse gases on local to regional scales in the Alaskan Arctic and demonstrate new remote sensing and improved modeling capabilities to quantify Arctic carbon fluxes and carbon cycle-climate processes. Ultimately, CARVE will provide an integrated set of data for unprecedented experimental insights into Arctic carbon cycling. CARVE will use a NASA C-23 Sherpa.

Surface Water and Ocean Topography
The Airborne Surface Water and Ocean Topography, or AirSWOT, project will be flown during the spring, summer and late fall from NASA’s Dryden Flight Research Center at Edwards, Calif. Gathering data off the coast of California, the Ka-band radar interferometer will help the science team determine the kinetic energy of the ocean circulation and how the ocean uptake of heat and carbon is being transferred into the atmosphere to verify its effects on climate change. The sensor will also collect hydrology measurements of the storage changes in terrestrial surface water bodies, soil content depending on seasonal changes, and river discharges into large bodies of water like the ocean. The interferometer will be mounted in a NASA King Air B200.

Clouds and Chemistry
The Deep Convective Clouds and Chemistry, or DC3, mission aims to study the effect of convective clouds on the upper tropospheric composition and chemistry. A National Science Foundation Gulfstream V aircraft will be the primary research tool. In addition, NASA’s DC-8 will be based in Salina, Kansas, from early May though June and will collect remote sensing data to complement the G-V aircraft, satellite and ground-based radar networks.

North American Ecosystem Soil Measurements
The Airborne Microwave Observatory of Subcanopy and Subsurface, or AirMOSS, investigation will gather high-resolution measurements of root-zone soil moisture in representative areas of North American ecosystems, quantify the impact of variations in soil moisture on the estimation of regional carbon fluxes, and extrapolate the estimates of regional carbon fluxes to the North American continental scale. The June mission will use the extensive ground, tower and aircraft measurements to validate model estimates. AirMoss will use an airborne ultra-high frequency synthetic aperture radar capable of penetrating through substantial vegetation canopies and soil to depths down to 4 feet (1.2 meters). For this mission, NASA's Uninhabited Aerial Vehicle Synthetic Aperture Radar, or UAVSAR, in P-band configuration will be mounted in a pod and flown on a NASA G-III. 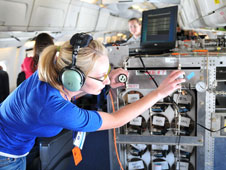 Soil Moisture Research fro SMAP
The Soil Moisture Active Passive Validation Experiment 2012, or SMAPVEX12, will use radiometer and radar L-band microwave measurements to study retrieval of land surface soil moisture over vegetation at an agricultural site near Winnipeg, Canada. Knowledge gained from this research will help improve the soil moisture retrieval algorithms to be used for NASA's Soil Moisture Active Passive, or SMAP, satellite mission planned for launch in 2014. Two aircraft will fly in the field campaign during June and July. A NASA G-III will fly from a deployment base in Grand Forks, N.D., and will carry the Uninhabited Aerial Vehicle Synthetic Aperture Radar, or UAVSAR, mounted in a pod under the aircraft. The second aircraft, a DHC-6 Twin Otter, will carry the PALS, or Passive Active L- and S-band Sensor, a combined polarimetric radiometer and radar sharing an array antenna.

Southeast Asia Emissions Survey
The Southeast Asia Composition, Cloud, Climate Coupling Regional Study, or SEAC4RS, will take place in August and September from a base in U-Tapao, Thailand. This mission will address key questions regarding the influence of Asian emissions on clouds, climate, meteorology and air quality. To accomplish the goals of SEAC4RS, multiple aircraft are required. The NASA DC-8 airborne laboratory will provide observations from near the surface to an altitude of more than 7 miles (12 kilometers). A NASA ER-2 will provide high-altitude observations reaching into the lower stratosphere as well as important remote sensing connecting satellites with data collected from lower flying aircraft and surface sites. The National Science Foundation Gulfstream V aircraft will investigate chemical transport processes in the 7 to 8.5 mile (12 to14 kilometer) altitude range. Finally, Thailand’s Bureau of Royal Rainmaking will provide a King Air Super 350, which will measure cloud and aerosol properties from the surface up to 5.8 miles (10 kilometers) altitude.

NASA Hurricane Studies
NASA's Hurricane and Severe Storm Sentinel, or HS3, investigation is planned for August through October from a base of operations at NASA's Wallops Flight Facility in Wallops Island, Va. HS3 is a multi-year study of the processes that underlie hurricane formation and intensity change in the Atlantic Ocean. Two NASA Global Hawk unmanned aircraft systems will carry a number of sensors for sampling above hurricane winds. 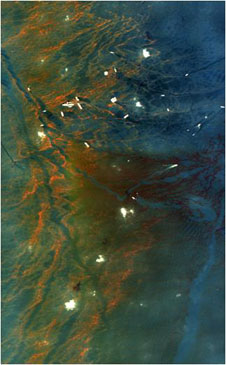 AVIRIS airborne measurement acquired May 17, 2010, over the site of the Deepwater Horizon BP oil rig disaster from NASA's high-altitude ER-2 science aircraft. The oil appears orange to brown. (NASA/JPL-Caltech/Dryden/USGS/UC Santa Barbara) › View Larger Image Visible and Infrared Imaging Spectrometer Research
Airborne Visible/Infrared Imaging Spectrometer, or AVIRIS, will be mounted on NASA’s high-altitude ER-2 for a series of science missions from May through July. The Hyperspectal Infrared Imager-precursor Large-scale Multi-season Climate Science Measurements, or HyspIRI, flights will be flown over California. A water productivity mapping of cotton crops mission will be flown over California’s San Joaquin Valley.

Flights as part of an integrated response to extreme dust deposition to the snow cover of the Colorado River basin will focus on areas in Colorado, Utah and Arizona. A Twin Otter will also flyover the Colorado Basin for this research and a comparison of data gathered by the ER-2.

In addition to the ER-2 flights, a contracted Twin Otter aircraft will carry AVIRIS from July through September. One study will focus on the post-burn evaluation of the ecosystem of a wildfire burn area in northern Minnesota. Another mission will focus on the next generation of ecosystems experiments designed for Arctic climates and will concentrate on Alaska.

NASA’s Stennis Space Center in Mississippi will lead the effort to model the remote detection of cyanobacterial (bacteria that derives its energy from photosynthesis) algae in disturbed productive waters with the hopes of developing an early pollution warning system.

The next-generation AVIRIS-NG sensor will collect data for missions to include a study of carbon assimilation and the health of Florida mangrove forests. Flown on the contracted Twin Otter, the various flights will take place during April and May and again in July and August. The Rocky Mountains of Colorado and the Sierra Nevada range of California will be studied for snowpack. The spectrometer will collect data on the production and changes of chlorophyll following BP oil spill hydrologic remediation of Bald Cypress swamps along the Gulf Coast of Texas, Louisiana and Florida. Another investigation will quantify the forest biomass and carbon stocks of New York state.

AVIRIS will explore the fuel consumption and carbon cycling in northern peatland ecosystems in California. The states of Massachusetts, New Hampshire and Minnesota are targets of an investigation to quantify uncertainties in interpreting the relationship between hyperspectral data and leaf biochemical elements.