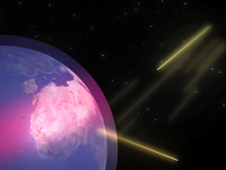 Roughly 30 percent of the radiation from the sun is reflected back into space, some of it by tiny airborne particles called aerosols. This artist concept depicts the process. Credit: UMBC/Megan Willy
> View animation

Aerosol particles come from both human and natural sources. The left half of this animation shows an urban cloud packed with gray soot particles. The right half shows a salt-filled cloud over a pristine area of the ocean. Credit: UMBC/Megan Willy
> View animation 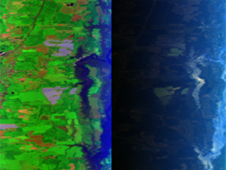 This pair of images shows a standard view of farmland near the Chesapeake Bay (left) and a polarized image of the same scene (right). The polarized image has less glare and a dull tone that makes it easier for researchers to detect small aerosols. Credit: NASA GISS/Brain Cairns
> Larger image Tiny, ubiquitous particles in the atmosphere may play a profound role in regulating global climate. But the scientists who study these particles -- called aerosols -- have long struggled to accurately measure their composition, size, and global distribution. A new detection technique and a new satellite instrument developed by NASA scientists, the Aerosol Polarimetry Sensor (APS), should help ease the struggle.

Some types of small aerosols -- such as black carbon from motor vehicle exhaust and biomass burning -- promote atmospheric warming by absorbing sunlight. Others, such as sulfates from coal-fired power plants, exert a cooling effect by reflecting incoming solar radiation back into space. Overall, aerosols present one of the greatest areas of uncertainty in understanding what drives climate change.

But quantifying the influence of aerosols on the atmosphere and climate has been hampered by difficulties in measuring the aerosols themselves. The problem is especially acute over land, where the glare from sunlight reflecting off Earth's surface overwhelms the passive imaging instruments scientists typically use to detect aerosols.

The Research Scanning Polarimeter (RSP), an aircraft-based version of APS, is the first such instrument to measure polarized light at one particularly important wavelength (2.2 micrometers). "The 2.2 micrometer channel is critical because it provides the only passive method we have to retrieve accurate and detailed aerosol properties over land surfaces," said Michael Mishchenko, Glory’s project scientist.

RSP uses crystal prisms to effectively filter out the bright glare from Earth’s surface, functioning somewhat like polarized sunglasses by only allowing light waves oriented in specific directions to pass.

According to Brian Cairns, an aerosol climatologist at GISS who has pioneered the technique, polarized images have a dull tone that make the subtle hues of aerosols easier to detect amidst the shades of gray land.

"The blueish tint of small aerosols in the atmosphere is more clearly distinguishable with polarized light," Cairns said.

RSP is not the first instrument to use polarimetry to measure aerosols. In 1996, a series of three French satellite instruments started measuring aerosols with polarized light. Cairns’ technique measures polarization more accurately, integrates more longwave and shortwave polarization information into the mathematical models, and is the first to provide accurate estimates of aerosol size and composition over land.

The RSP instrument views a point in the atmosphere from more than 100 angles, enabling more complete characterization of aerosols by robust mathematical models. RSP and the soon-to-be-launched APS use parallel optical paths to collect measurements from all wavelengths and polarizations simultaneously. This approach to monitoring the continuously changing scene offers greater accuracy compared to previous polarimeters, which used a rotating filter wheel to measure wavelengths and polarizations sequentially.

To test their technique, Cairns and colleagues from Columbia University and the U.S. Department of Energy conducted a series of field campaigns. In 2003, researchers mounted an RSP instrument on a Cessna 310 airplane and flew the instrument above smoke plumes from wildfires in California’s Simi Valley. In 2005, a J31 research aircraft flew RSP over dust plumes in Oklahoma.

In both cases, the airborne data corresponded well with observations from ground-based photometers known to provide accurate aerosol measurements. By integrating the additional polarization wavelengths into their computer models, Cairns estimated that the technique is several times more accurate than previous measurements. The results were presented in January in the Journal of Geophysical Research.

Qingyuan Han, an atmospheric scientist at the University of Alabama Huntsville who was not involved in the study, agreed. "The high sensitivity of polarized reflectance offers tremendous information that could not be obtained by other techniques," he said.

For instance, Light Detection and Ranging, or lidar, bounces pulses of light off of airborne aerosols and can accurately measure the vertical distribution of aerosols. But current LIDAR systems still struggle to measure aerosol size and composition, says Han, who conducts research using LIDAR. He sees roles for both techniques as a complement to one another.

The techniques developed with the RSP instrument have contributed to the creation of the APS, a spaceborne version that will fly on NASA's Glory satellite. Functionally identical to RSP, the APS uses slightly different wavelengths of light to improve estimates of ocean color, water vapor, and cirrus clouds. "But the theory for APS and RSP is exactly the same," said Cairns.

According to Cairns, APS will be especially useful for identifying and quantifying smaller aerosols, which come mainly from human sources. Smaller aerosols are thought to affect climate more than larger aerosols such as dust and salt.

Once Glory launches, scientists expect APS to offer a wealth of new data that will help them peel away long-standing uncertainties about aerosols. "We still don’t understand a lot about them," Cairns said, "and yet they play such a key role in our climate system."