Interactions with Aerosols Boost Warming Potential of Some Gases 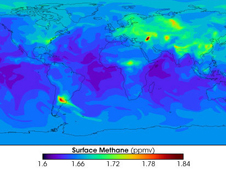 This map shows the distribution of methane at the surface. New research shows that methane has an elevated warming effect due to its interactions with other substances in the atmosphere. Credit: NASA/Goddard
› Larger image For decades, climate scientists have worked to identify and measure key substances -- notably greenhouse gases and aerosol particles -- that affect Earth’s climate. And they’ve been aided by ever more sophisticated computer models that make estimating the relative impact of each type of pollutant more reliable.

Yet the complexity of nature -- and the models used to quantify it -- continues to serve up surprises. The most recent? Certain gases that cause warming are so closely linked with the production of aerosols that the emissions of one type of pollutant can indirectly affect the quantity of the other. And for two key gases that cause warming, these so-called “gas-aerosol interactions” can amplify their impact.

“We’ve known for years that methane and carbon monoxide have a warming effect,” said Drew Shindell, a climate scientist at the NASA Goddard Institute for Space Studies (GISS) in New York and lead author of a study published this week in Science. “But our new findings suggest these gases have a significantly more powerful warming impact than previously thought.”

When vehicles, factories, landfills, and livestock emit methane and carbon monoxide into the atmosphere, they are doing more than just increasing their atmospheric concentrations. The release of these gases also have indirect effects on a variety of other atmospheric constituents, including reducing the production of particles called aerosols that can influence both the climate and the air quality. These two gases, as well as others, are part of a complicated cascade of chemical reactions that features competition with aerosols for highly reactive molecules that cleanse the air of pollutants. 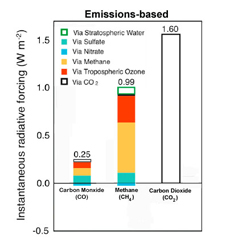 "Emissions-based" estimates highlight the indirect effects that emissions of certain gases can have on the climate via aerosols, methane, ozone, and other substances in the atmosphere. Credit: NASA/GISS
› Larger image Aerosols can have either a warming or cooling effect, depending on their composition, but the two aerosol types that Shindell modeled -- sulfates and nitrates -- scatter incoming light and affect clouds in ways that cool Earth. They are also related to the formation of acid rain and can cause respiratory distress and other health problems for those who breathe them.

Human activity is a major source of sulfate aerosols, but smokestacks don’t emit sulfate particles directly. Rather, coal power production and other industrial processes release sulfur dioxide -- the same gas that billows from volcanoes -- that later reacts with atmospheric molecules called hydroxyl radicals to produce sulfates as a byproduct. Hydroxyl is so reactive scientists consider it an atmospheric "detergent" or "scrubber" because it cleanses the atmosphere of many types of pollution.

In the chemical soup of the lower atmosphere, however, sulfur dioxide isn’t the only substance interacting with hydroxyl. Similar reactions influence the creation of nitrate aerosols. And hydroxyls drive long chains of reactions involving other common gases, including ozone.

Methane and carbon monoxide use up hydroxyl that would otherwise produce sulfate, thereby reducing the concentration of sulfate aerosols. It's a seemingly minor change, but it makes a difference to the climate. “More methane means less hydroxyl, less sulfate, and more warming,” Shindell explained. 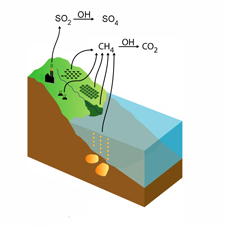 Many atmospheric pollutants compete for access to hydroxyl radicals (OH), highly reactive molecules that “scrub” the atmosphere of pollutants. This diagram illustrates hydroxyl converting methane (CH4) into carbon dioxide (CO2) and sulfur dioxide (SO2) into sulfate aerosols. Credit: NASA/GISS
› Larger image His team’s modeling experiment, one of the first to rigorously quantify the impact of gas-aerosol interactions on both climate and air quality, showed that increases in global methane emissions have caused a 26 percent decrease in hydroxyl and an 11 percent decrease in the number concentration of sulfate particles. Reducing sulfate unmasks methane’s warming by 20 to 40 percent over current estimates, but also helps reduce negative health effects from sulfate aerosols.

Nitrogen oxides -- pollutants produced largely by power plants, trucks, and cars -- led to overall cooling when their effects on aerosol particles are included, said Nadine Unger, another coauthor on the paper and a climate scientist at GISS. That’s noteworthy because nitrogen oxides have primarily been associated with ozone formation and warming in the past.

To determine the climate impact of particular greenhouse gases, scientists have traditionally relied on surface stations and satellites to measure the concentration of each gas in the air. Then, they have extrapolated such measurements to arrive at a global estimate.

The drawback to that "abundance-based approach," explained Gavin Schmidt, another GISS climate scientist and coauthor of the study, is that it doesn’t account for the constant interactions that occur between various atmospheric constituents. Nor is it easy to parse out whether pollutants have human or natural origins. 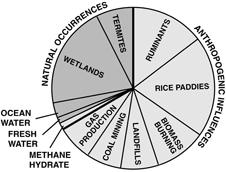 Natural sources of methane include wetlands, termites, decomposing organic materials in ocean and fresh water, and a type of ice called methane hydrate. Man-made methane sources include livestock, rice paddies, biomass burning, landfills, coal mining, and gas production. Credit: U.S Dept. of Energy Technology Laboratory
› Larger image “You get a much more accurate picture of how human emissions are impacting the climate -- and how policy makers might effectively counteract climate change -- if you look at what’s emitted at the surface rather than what ends up in the atmosphere,” said Shindell, who used this “emissions-based” approach as the groundwork for this modeling project.

However, the abundance-based approach serves as the foundation of key international climate treaties, such as the Kyoto Protocol or the carbon dioxide cap-and-trade plans being discussed among policymakers. Such treaties underestimate the contributions of methane and carbon monoxide to global warming, Shindell said.

According to Shindell, the new findings underscore the importance of devising multi-pronged strategies to address climate change rather than focusing exclusively on carbon dioxide. “Our calculations suggest that all the non-carbon dioxide greenhouse gases together have a net impact that rivals the warming caused by carbon dioxide."

In particular, the study reinforces the idea that proposals to reduce methane may be an easier place for policy makers to start climate change agreements. “Since we already know how to capture methane from animals, landfills, and sewage treatment plants at fairly low cost, targeting methane makes sense,” said Michael MacCracken, chief scientist for the Climate Institute in Washington, D.C.

This research also provides regulators insight into how certain pollution mitigation strategies might simultaneously affect climate and air quality. Reductions of carbon monoxide, for example, would have positive effects for both climate and the public’s health, while reducing nitrogen oxide could have a positive impact on health but a negative impact on the climate.

“The bottom line is that the chemistry of the atmosphere can get hideously complicated,” said Schmidt. “Sorting out what affects climate and what affects air quality isn’t simple, but we’re making progress.”