Grow Text SizeShrink Text Size
Aerosols: From Ash in the Wind to Smoke from the Stack
When we hear the word "aerosol," most of us think of spray cans and perhaps the ozone hole. But spray cans are just a very small part of the story. Any airborne solid particle or liquid droplet -- whether it comes from a pressurized canister, the smokestack of a factory, or a dust storm -- is technically an aerosol.

Because of their diminutive size -- most individual aerosol particles are invisible to the human eye -- it is easy to overlook them. Yet collectively, they have a dramatic impact, affecting our health, our weather, our climate -- even the color of sunsets and the brightness of clouds. And, as we saw this week, they can even snarl air traffic and shut down airports.

Aerosols, or the gases that lead to their formation, come from vehicle tailpipes and desert sands, from sea spray and fires, volcanic eruptions and factories. Even lush forests, soils, or communities of plankton in the ocean can be sources of aerosols. These ubiquitous particles fall on our skin, layer the surfaces of our food, and linger in our air. No matter how much we scrub, vacuum, or clean, we'll never be able to seal ourselves off from them.

It's the small, fine and ultrafine aerosols that pose the greatest threat to our health. While larger particles (such as sea salt) tend to fall rapidly from the air, smaller ones remain aloft and can work their way into the lungs and bloodstream, fueling a variety of cardiovascular and respiratory diseases.


This gallery of images shows aerosols and aerosol sources in action. Click the images or view full screen for captions and credit information.
› View images on Flickr

Aerosols also help create our weather, seeding clouds and guiding when and how much it rains. The outpouring of aerosols during the work week, for example, invigorates thunderstorms and produces more thunder, lightning, and hail on weekdays compared to weekends. Air pollution in Asia can alter the dynamics of the monsoon, affecting the water cycle for an entire region.

Perhaps most critically, aerosols help keep Earth’s climate in balance. By reflecting and scattering sunlight, they moderate Earth's temperature. Reflective aerosols, such as sulfates from volcanic eruptions and industrial activity, act like mirrors reflecting incoming light back to space and cooling Earth. Dark aerosols -- especially the soot from diesel engines and burning plant material -- have the opposite effect.

Though tiny, aerosols are world travelers. Most remain in the troposphere (the layer of atmosphere closest to Earth’s surface) and can be transported long distances. Dust from the Sahara, for example, often reaches the Caribbean. Small aerosols and aerosol producing gases are injected high into the stratosphere, where they can remain suspended for months. 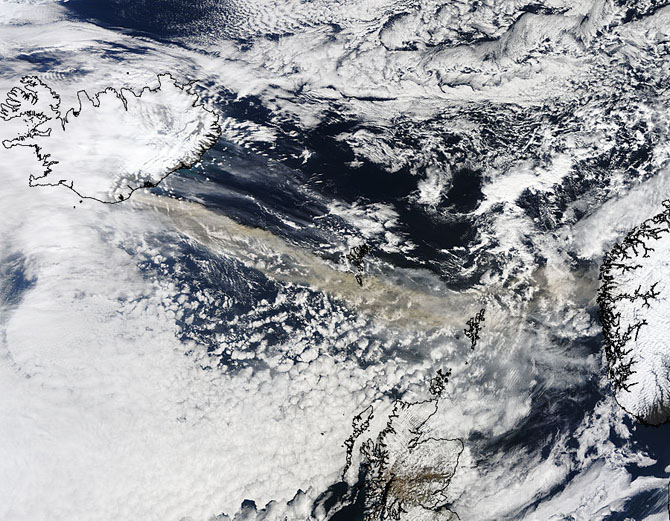 In the last five decades, some four dozen satellites and many more air and ground campaigns have studied aerosols in one way or another. Instruments -- such as NASA’s Moderate-resolution Imaging Spectroradiometer (MODIS) and Multi-Angle Imaging Spectrometer (MISR) have observed dust traveling thousands of miles across the Atlantic, and they’ve tracked smoke plumes from wildfires moving across continents. These instruments have observed some aerosols growing more common, while the levels of others have dwindled.

"Still, there's so much more we want -- and need -- to understand about aerosols," said Michael Mishchenko, a researcher at NASA's Goddard Institute for Space Studies in New York City. What are the size, shape, and light-scattering characteristics of the aerosols in any given column of air? How do aerosols behave in freezing clouds as opposed to warm, moist ones? How do aerosols change as they age?

There are so many types of aerosols, and they change so rapidly, that the answers are elusive. But in the next few years, Mishchenko and colleagues may get some answers from Glory, a new NASA climate satellite that will observe aerosols. Glory will launch no earlier than November 22, 2010. In anticipation of that, here's a slideshow of some of the fundamentals of aerosol science.