Grow Text SizeShrink Text Size
World's Largest Aerosol Sensing Network Has Leafy Origins
"Aerosols play a key role in climate, and pretty much everybody who studies aerosols uses data from AERONET," said William Lau, director of the Atmospheric Sciences Division at Goddard. "Without AERONET, our understanding of the climate system simply wouldn’t be where it is today."

Trouble Seeing the Forest and the Trees 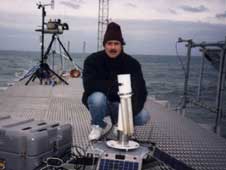 > View larger image
The worldwide network of ground-based aerosol sensors has grown to 400 sites across seven continents, however, two-thirds of the planet is covered by ocean and aerosols are scarcely measured over the oceans. Usher in the Maritime Aerosol Network (MAN), which will send researchers with portable photometers on oceanographic research cruises. > Read more The origins of AERONET date to the late 1980s, when Goddard researchers were attempting — and struggling — to study vegetation using satellites. "The atmosphere kept getting in the way," Holben said. Satellites couldn't properly sense the vegetation through all the dust, minerals, soot, salt, and other atmospheric aerosols obscuring the view. The problem prompted Holben to put his vegetation research aside "temporarily" to tackle aerosols. In 1992, he planned a field campaign to the Amazon, where farmers were burning swaths of rainforest to clear the land. The heavy emissions from the fires made it an ideal environment to study aerosol particles. During that project, Holben began to develop a method for studying aerosols that became a template for future campaigns. He used lamp-sized instruments called sun-sky photometers to measure the intensity of light filtering through a given column of atmosphere. Aerosol particles scatter or absorb portions of the incoming light, allowing scientists to deduce their size, shape, and chemical composition. Often the instruments are installed on the roofs of universities, but solar-powered versions of the devices can also be deployed in remote corners of the world, far off the grid.

Intriguing results began to emerge from the Amazon campaign as well as others in Africa, Canada, and Hawaii. Though aerosols generally reside in the atmosphere for just a few weeks, the data from the Amazon showed that heavy fires could increase pollution levels dramatically for as long as two months after the burning season ended.

A Time to Plant, A Time to Reap 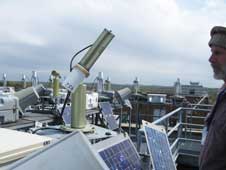 > View larger image
On the roof of a building at NASA's Goddard Space Flight Center in Greenbelt, Md., AERONET manager Brent Holben explains how sun-sky photometers work. Credit: NASA The timing of Holben’s foray into aerosol research turned out to be impeccable. Around the time he was deploying photometers in the Amazon, the volcanic eruption of Mount Pinatubo in the Philippines flooded the atmosphere with sulfate aerosols. The burst blocked some solar radiation from reaching Earth’s surface and caused global temperatures to drop by 0.5 °C (0.9 °F) for a few years. The eruption underscored the profound impact sulfate aerosols could have on climate. It also reminded researchers how poorly they understood many other types of aerosols. Deploying more photometers was a logical and relatively low-cost way to start filling the gaps in knowledge. Holben and colleagues slowly set up an array of sensors in the United States, while forging collaborations for similar networks in France, Brazil, Spain, Canada, and Japan. Soon, Holben and his collaborators realized that they had created a global network. In 1998, he described the network’s potential in an article in Remote Sensing of Environment, laying out methods of calibrating the sensors and guidelines for collecting and interpreting data. With that paper, AERONET was officially born. Today AERONET consists of approximately 400 sites in 50 countries on all seven continents. There are AERONET stations on remote sand dunes in Mali, on the ice sheet at South Pole, and on the tiny island nation of Nauru in the South Pacific.

> View larger image
AERONET consists of approximately 400 sites in 50 countries on all seven continents. The red squares on the map below indicate the locations of AERONET sites. Credit: NASA By providing accurate measurements from the ground, AERONET has emerged as the best tool to validate the accuracy of new satellite instruments. For example, scientists have relied upon AERONET to reconcile differences between aerosol measurements from the Moderate-Resolution Imaging Spectroradiometer (MODIS) and the Multiangle Imaging SpectroRadiometer (MISR), two instruments on NASA's Terra satellite. "Without AERONET, we'd have no baseline for comparison," said Michael Mishchenko, a remote sensing expert at NASA’s Goddard Institute for Space Studies in New York City and project scientist for NASA’s upcoming Glory mission. Glory will rely on AERONET to validate the Aerosol Polarimetery Sensor, an innovative instrument that will distinguish between different types of aerosols from space. Though developed nations are dense with AERONET stations, coverage in many developing areas remains sparse. That's a problem because aerosols don’t recognize borders and they aren’t limited to land masses.

Gaps in coverage can lead to gaps in understanding, said Venkatachalam Ramaswamy, director of the National Oceanic and Atmospheric Administration's Geophysical Fluid Dynamics Laboratory and a professor of geosciences at Princeton University, N.J. Compared to other factors that affect climate — such as the output of the Sun or greenhouse gases — aerosols are considered the least-well understood. So Holben and colleagues are working to expand AERONET and continue filling in the gaps. Zhanqing Li, an atmospheric scientist at the University of Maryland, College Park, Md. is leading an international field campaign in China, where aerosol loading is exceptionally high. The scientists are deploying AERONET photometers and other instruments that gather information about the impact of aerosols on the region's climate, especially on the dynamics of the Asian monsoon.

In India, AERONET-affiliated researchers are deploying sensors along the flight track of NASA's CALIPSO satellite, which uses light detection and ranging (LIDAR) to measure aerosols. AERONET's open-source approach to data collection and analysis has also aided its expansion. All data is relayed through weather satellites to a centralized database at Goddard, where it quickly becomes available on the Internet.

"It's always been important to me that AERONET data be freely available," Holben said. "The taxpayers fund this project, and they deserve to know what we're finding."

"Scientists are typically protective of their data, so Holben’s insistence on data sharing was a bit avant-garde," said Joel Schafer, a Goddard AERONET scientist. The strategy has paid off. The 1998 study Holben used to introduce AERONET recently passed an impressive academic milestone: it has been cited more than 1,000 times, making it one of the most referenced papers in contemporary earth science. With that accomplishment under his belt, perhaps Holben will have the time to turn back to that old vegetation research.