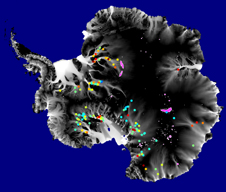 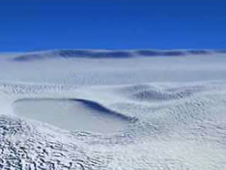 For some Antarctic lakes, pressure exerted by the ice above forces its water to fill an adjacent lake. The movement results in elevation changes at the surface over both lakes, detectable by NASA satellites. Credit: NASA Goddard's Scientific Visualization Studio
› View conceptual animation Lakes in Antarctica, concealed under miles of ice, require scientists to come up with creative ways to identify and analyze these hidden features. Now, researchers using space-based lasers on a NASA satellite have created the most comprehensive inventory of lakes that actively drain or fill under Antarctica's ice. They have revealed a continental plumbing system that is more dynamic than scientists thought.

"Even though Antarctica's ice sheet looks static, the more we watch it, the more we see there is activity going on there all the time," said Benjamin Smith of the University of Washington in Seattle, who led the study.

Unlike most lakes, Antarctic lakes are under pressure from the ice above. That pressure can push melt water from place to place like water in a squeezed balloon. The water moves under the ice in a broad, thin layer, but also through a linked cavity system. This flow can resupply other lakes near and far.

Understanding this plumbing is important, as it can lubricate glacier flow and send the ice speeding toward the ocean, where it can melt and contribute to sea level change. But figuring out what's happening beneath miles of ice is a challenge.

Researchers led by Smith analyzed 4.5 years of ice elevation data from NASA's Ice, Cloud and land Elevation satellite (ICESat) to create the most complete inventory to date of changes in the Antarctic plumbing system. The team has mapped the location of 124 active lakes, estimated how fast they drain or fill, and described the implications for lake and ice-sheet dynamics in the Journal of Glaciology.

For decades, researchers flew ice-penetrating radar on airplanes to "see" below the ice and infer the presence of lakes. In the 1990s, researchers began to combine airborne- and satellite-based data to observe lake locations on a continent-wide scale.

Scientists have since established the existence of about 280 "subglacial" lakes, most located below the East Antarctic ice sheet. But those measurements were a snapshot in time, and the question remained as to whether lakes are static or dynamic features. Were they simply sitting there collecting water?

In 2006 Helen Fricker, a geophysicist at the Scripps Institution of Oceanography, La Jolla, Calif., used satellite data to first observe subglacial lakes on the move. Working on a project to map the outline of Antarctica's land mass, Fricker needed to differentiate floating ice from grounded ice. This time it was laser technology that was up to the task. Fricker used ICESat's Geoscience Laser Altimeter System and measured how long it took a pulse of laser light to bounce of the ice and return to the satellite, from which she could infer ice elevation. Repeating the measurement over a course of time revealed elevation changes.

"Sub-ice-sheet hydrology is a whole new field that opened up through the discovery of lakes filling and draining on relatively short timescales and involving large volumes of water," said Robert Bindschadler, a glaciologist at NASA's Goddard Space Flight Center in Greenbelt, Md., who has used ICESat data in other studies of Antarctica. "ICESat gets the credit for enabling that discovery."

Networking in the Antarctic

But were active lakes under the ice a common occurrence or a fluke?

To find out, Ben Smith, Fricker and colleagues extended their elevation analysis to cover most of the Antarctic continent and 4.5 years of data from ICESat's Geoscience Laser Altimeter System (GLAS). By observing how ice sheet elevation changed between the two or three times the satellite flew over a section every year, researchers could determine which lakes were active. They also used the elevation changes and the properties of water and ice to estimate the volume change.

Only a few of the more than 200 previously identified lakes were confirmed active, implying that lakes in East Antarctica's high-density "Lakes District" are mostly inactive and do not contribute much to ice sheet changes.

Most of the 124 newly observed active lakes turned up in coastal areas, at the head of large drainage systems, which have the largest potential to contribute to sea level change.

Connections between lakes are apparent when one lake drains and another simultaneously fills. Some lakes were found to be connected to nearby lakes, likely through a network of subglacial tunnels. Others appeared to be linked to lakes hundreds of miles away.

The team found that the rate at which lake water drains and fills varies widely. Some lakes drained or filled for periods of three to four years in steady, rather than episodic, changes. But water flow rates beneath the ice sheet can also be as fast as small rivers and can rapidly supply a lubricating film beneath fast-flowing glaciers.

"Most places we looked show something happening on short timescales," Smith said. "It turns out that those are fairly typical examples of things that go on under the ice sheet and are happening all the time all over Antarctica."