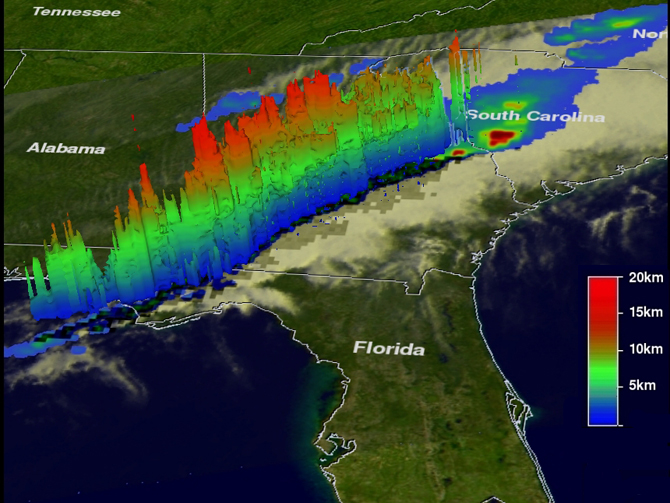 › View larger
TRMM's Precipitation Radar (PR) data was used to show the line of severe thunderstorms in 3-D. The line of storms were pushing through North and South Carolina on Nov. 16, 2011. Strong updrafts had pushed precipitation within some of these storms to heights of 15km (9.3 miles). Credit: SSAI/NASA, Hal Pierce

Tornadoes are expected to accompany severe storms in the springtime in the U.S., but this time of year they also usually happen. When a line of severe thunderstorms associated with a cold front swept through the U.S. southeast on Nov. 16, TRMM collected rainfall data on the dangerous storms from space.

NASA's Tropical Rainfall Measuring Mission (TRMM) satellite flew over the southeastern United States on November 16, 2011 at 2310 UTC (6:10 p.m. EST) when tornadoes were occurring with a line of thunderstorms that stretched from western Florida north through North Carolina. At least six deaths were caused by one of these tornadoes that destroyed three homes near Rock Hill, South Carolina.

Typically in the fall, the transition from warm air to cooler air occurs as Canadian cold air moves down into the U.S. The combination of a strong cold front with warm, moist air in its path enables the creation of strong to severe storms at this time of year.

TRMM data was used to create a rainfall analysis of the line of severe thunderstorms associated with the cold front. The analysis showed that the area of moderate to very heavy rainfall (falling at more than 2 inches or 50 mm per hour) with this frontal system was only located in a narrow line. In addition to heavy rain and some tornadoes, the strong cold front brought winds gusting over 30 mph, and a temperature drop of as much as 20 degrees as the front passed.

Data captured at the same time with TRMM's Precipitation Radar (PR) were used to create a three dimensional look at the line of severe storms. That 3-D image shows the vertical structure or height of the thunderstorms. The higher the cloud tops go, the stronger the storm. Strong updrafts had pushed precipitation within some of these storms to heights of 9.3 miles (15 kilometers). 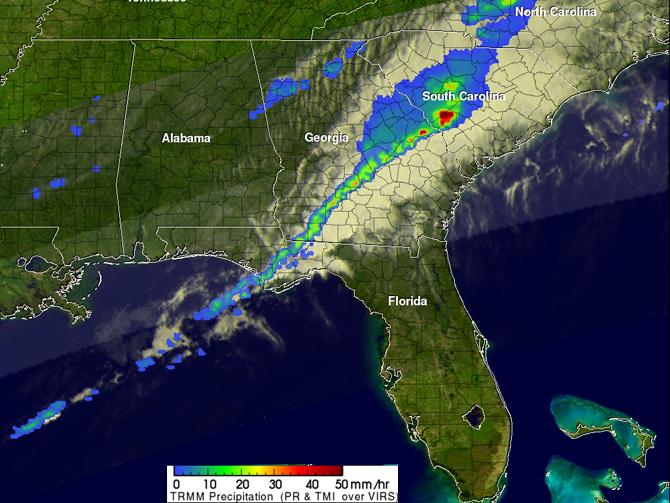 › View larger
This analysis shows that the area of moderate to very heavy rainfall (shown in red) with this frontal system was only located in a narrow line. The red areas indicate heavy rainfall of 2 inches (50 mm) per hour. Light to moderate rainfall (green and blue) around much of the storm was falling at a rate between .78 to 1.57 inches/20 to 40 mm per hour). Credit: SSAI/NASA, Hal Pierce

According to USA Today tornadoes were reported in four states from that line of thunderstorms. Alabama, Mississippi, Louisiana and South Carolina all had reported tornadoes, and dozens of buildings and homes were damaged. The line of severe weather also took down trees and power lines leaving many without electricity.

The Tropical Rainfall Measuring Mission is a joint mission between NASA and the Japan Aerospace Exploration Agency (JAXA) designed to monitor and study tropical rainfall.