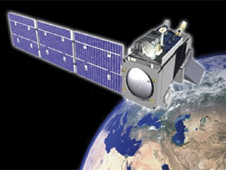 NPP is a risk reduction mission for NPOESS, and will be the first major element of the next generation U.S. Earth observation system when it is launched in 2010. NPP is a joint mission between NASA and the NPOESS Integrated Program Office (IPO). NPOESS is the U.S. Government’s future low-earth orbiting weather and environmental satellite system, which will combine missions currently performed separately by three agencies (NASA, DOD and NOAA). NPP science instruments will provide essential data to bridge climate measurements coming from NASA’s Earth Observation System research satellites and the launch of the operational NPOESS system is planned for 2013.

"This review of was the most far-reaching and detailed review of operations that we’ve had,” said Dave Vandervoet, Vice President for Civil Systems Division for Northrop Grumman's Space Technology sector, Redondo Beach, Calif. "Strengths and weaknesses were identified, but most importantly, the MOR determined that NPP’s overall operations readiness is sound and that this satellite will perform its required mission.” 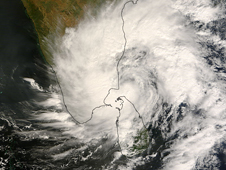 The NPOESS Preparatory Project first launch will carry five state-of-the art sensors to observe the oceans, land cover, snow and ice cover, and the atmosphere. This image from the MODIS instrument on NASA's Terra satellite is Tropical Cyclone 06B over Sri Lanka and India on 11/26 at 5:25 UTC. Credit:NASA MODIS Rapid Response Team
> Larger image Ken Schwer, NASA NPP Program Manager at NASA Goddard Space Flight Center, Greenbelt, Md. said, "The NPP Mission Operations team successfully completed and passed the NPP Mission Operations Review. The review covered 3 days with over 1000 pages of material presented to a very experienced review panel consisting of 15 members from all 3 agencies with co-chairs from NASA and the IPO (Air Force). Since the NPP MOR was the first NPOESS review with all organizations, agencies, and contractors involved, it can easily be considered the biggest review in the history of NPOESS."

The review team stated that the ground system was mature with very good technical management and communications throughout the NPP/NPOESS organizations. "Great teamwork was displayed by the Mission Operations folks over the last couple months and the successful NPP MOR is truly an outstanding accomplishment for NPP/NPOESS," Schwer said.

NPP has been undergoing compatibility tests with sensor engineering development units or actual flight units and with the ground system. Three sensors have been delivered for integration onto NPP, and additional testing is being performed to reduce risk until the remaining two sensors are delivered.