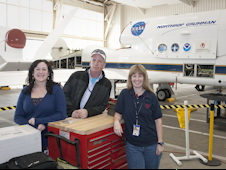 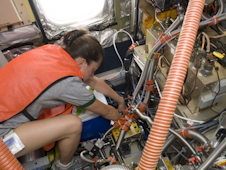 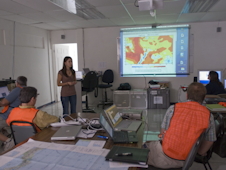 Project Manager Michael Craig from Ames has been part of NASA’s Earth Science missions since the beginning of ESPO in 1986, when they supported their first airborne campaigns: the Stratosphere-Troposphere Exchange Project (STEP) in Darwin, Australia, and the Airborne Antarctic Ozone Expedition (AAOE) in Punta Arenas, Chile. Craig first became a project manager in 1994 for the Airborne Southern Hemisphere Ozone Experiment (ASHOE) in Christchurch, New Zealand, which examined the causes of ozone loss in the Southern Hemisphere. To date, ESPO has managed more than 43 different missions around the world, each mission very different from the last. This month, the MACPEX mission flies over Oklahoma, the southeastern United States and the Gulf of Mexico.

Have Earth science missions changed over the years? Other than location, are airborne field campaign science experiments that different?

Locations are the biggest difference because it’s night and day between operating a mission from a NASA center versus one on a remote island in the middle of nowhere. In addition, each one has different scientists, instruments, aircraft, and science objectives, which all have different requirements and budgets. Experiments have naturally become more and more complicated over the years. The instruments are getting smaller because of advances in technology, which leads to more instruments on the aircraft and a larger team to manage.

The MACPEX mission is using NASA’s WB-57 as a platform to fly 24 instruments and has an extensive support science team for the aircraft, science flights and instruments. Participants include teams from several NASA centers, the Jet Propulsion Laboratory, Pasadena, Calif.; National Oceanic and Atmospheric Administration, Washington, D.C.; National Center of Atmospheric Research, Boulder, Colo.; University of Colo., Boulder; University of Denver; Harvard University, Cambridge, Mass.; University of Utah, Salt Lake City; and Forschungszentrum Jülich, Germany. How do you coordinate and get researchers to collaborate on such diverse research requests? The field campaign is technically very sophisticated. What’s the secret?

No secret really, just hard work on everyone’s part. The science teams are selected by an expert review panel based on proposals written in response to a NASA Research Announcement for the mission. Once the proposal selection process has been completed, ESPO starts working with the scientists to determine each team’s requirements for the mission. We manage every aspect of the mission from cradle to grave, from setting up international agreements to who sweeps the floors. We want to make each team feel at home at the deployment site and have everything they need. ESPO tries to get all this started six months to a year in advance, but it never seems like enough time. If we are successful in gathering all the requirements, and plan with care, the mission will likely be successful!

You decide how to communicate with institutional and individual participants. What kinds of communications do you use and have you ever had to build a new network communications system for a mission?

Thank God for computers, because communication really is the key! It takes a lot of emails, teleconferences, meetings and reviews before you can even begin the mission. This is continued daily during the deployment, most times over a local area network that we install in the labs. During the mission, we’re with everyone for very long days, which does help, but you still need email and web pages to make sure everyone has access to information and is on the same page. Teams also rely on communication capability with their home labs during the experiment, whether for data transfers, or if needed to obtain spare parts, drawings or advice.

What determines which science objective goes first, or receives top priority? I suspect the weather is your first concern. But what constitutes a great day for a science research flight?

A mission’s first science objective depends on Mother Nature. Before the mission starts, we know the typical weather patterns for the area, and have a list of flight plans for each of the mission objectives. On a given flight day, three things need to come together: (1) the weather at takeoff and landing has to be suitable, (2) all the instruments and aircraft have to be in working order, and (3) the weather of interest has to be present. A great day for a research flight is when all these pieces come together.

Is it difficult to receive approval from the Federal Aviation Administration (FAA) to fly these experiments? How long does it take to schedule such flights in advance? Do FAA permits to fly research experiments come with constraints?

It is not difficult to receive approval from the FAA, but it can get very complicated. That’s why we start working with the FAA as soon as possible to reduce possible constraints. If you need to fly multiple aircraft over a point, or through a particular cloud system, and it’s in the middle of a major air traffic route, a great deal of coordination is needed. This is especially true with unmanned aircraft used for Earth science experiments. The more difficult part is usually obtaining permissions to fly over other countries. For example, we successfully flew a U-2 over Russia multiple times!

The Upper Atmosphere and Radiation Sciences Programs are both part of NASA HQ’s Earth Science Atmospheric Composition Focus Area, so they work very closely together. In general, the Upper Atmosphere program focuses on the chemical species of the upper atmosphere, and the Radiation Sciences program measures the impact of radiation from the sun and the particles in the atmosphere that block or reflect the rays. They might use different types of instruments to answer the science objectives, but both are needed to solve the big picture. The Airborne Science program provides the unique NASA aircraft to carry the scientific instruments. Ruth Dasso Marlaire
Ames Research Center, Moffett Field, Calif.
› Back To Top