Bruce Chapman has been working on the Uninhabited Aerial Vehicle Synthetic Aperture Radar (UAVSAR) project since 2007, sharing in both the engineering and science responsibilities. He is leading the development of the UAVSAR flight planning system, as well as working on other topics such as the calibration of the instrument and applications of the data.

Chapman grew up in the San Francisco Bay area, where he attended several public elementary schools. He first realized he would like to be a scientist in fourth grade. This was about the same time that NASA was landing people on the moon, which he avidly followed. While in high school, he spent a lot of nights in his backyard gazing at the planets with his home-built, eight-inch Newtonian Reflector telescope. It was therefore not surprising to his friends and family when he majored in physics and astronomy at University of California, Berkeley, and then went on to get his doctorate in Earth, atmospheric, and planetary sciences at Massachusetts Institute of Technology.

Bruce has been working at NASA's Jet Propulsion Laboratory in Pasadena, Calif. ever since. With a switch from his earlier days of looking into space from Earth, he now looks down to study Earth with airborne and spaceborne imaging radars. He is currently working on several research tasks, including the identification of inundated wetlands in radar imagery, and techniques for measuring vegetation structure from interferometric radar data. He still loves reading about NASA's missions to Mars, Jupiter, and Saturn, but he is very happy to now be studying phenomena here on our own very unique planet. 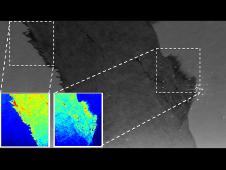 The Uninhabited Aerial Vehicle Synthetic Aperture Radar (UAVSAR) is an airborne radar used to study earthquakes, volcanoes, vegetation, hydrology, ice, and other Earth features. Designed to ultimately operate onboard a Global Hawk remotely controlled aircraft, UAVSAR currently flies on a NASA C-20A piloted aircraft. When flown over the same area multiple times, UAVSAR is uniquely designed to see how the area changes. The Precision Autopilot controls the airplane so that it can fly the same path within 33 feet or 10 meters. Using the technique of radar interferometry, two UAVSAR images of the same area can be differenced to show the changes between the images. UAVSAR data are acquired all over the world not only for science applications. The images are also valuable tools for mapping damages from natural disasters and to aid in disaster preparation and damage mitigation.

Airborne radars such as UAVSAR are also used to help design spaceborne radar instruments and experiments and to underfly existing remote sensing spacecraft.