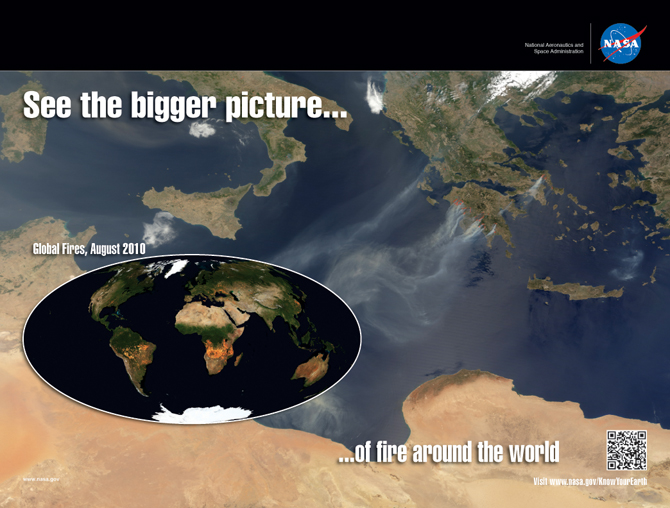 See the bigger picture of fire around the world.

Fire has a surprisingly big impact on our planet. NASA satellites see, on average, 10,000 fires a day. Some of the fires are started by lightning, but most are ignited by people. We set fires for many reasons—to manage farmland, clear unwanted plants, or rejuvenate grass or pastureland.

NASA studies fire’s impact on local ecosystems, air quality, weather, and climate. Satellites like Landsat, Terra, and Aqua help us measure the impact of a single fire on an ecosystem and locate fires across a broad area. Other satellites (Terra, Aqua, Aura, CALIPSO) monitor how smoke affects our air quality as it travels across long distances. Scientists are also learning that smoke shapes clouds and can influence regional weather. Fire converts carbon stored in plants into carbon gases that contribute to global warming. The Terra, Landsat, and Aqua satellites measure plant growth, showing how plants take carbon from the atmosphere as they regrow after a fire. The same measurements can show where plants are dry and prone to fire.

These maps show the locations of fires throughout the world as seen by the Moderate Resolution Imaging Spectroradiometer (MODIS) on NASA'a Terra satellite. Yellow areas indicate high concentrations of fire, while red areas point to lower concentrations. http://earthobservatory.nasa.gov/GlobalMaps/view.php?d1=MOD14A1_M_FIRE

The Wallow Fire started on May 29, 2011, and by early June had become the largest fire in Arizona's history. These satellite images show the fire's growth and containment throughout the month of June. http://earthobservatory.nasa.gov/NaturalHazards/category.php?cat_id=8&m=06&y=2011

Images of individual fires and smoke from NASA's Earth Observatory section on natural hazards: Fires and Smoke and haze