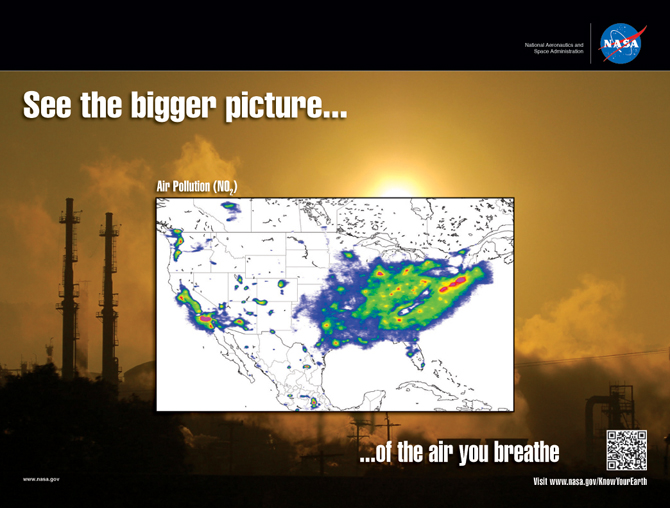 See the bigger picture of the air you breathe.

NASA studies air pollution from satellite data collected high above the Earth’s surface. Nitrogen dioxide -- or NO2 -- is a toxic gas and common air pollutant identified by its pungent smell and reddish-brown color. According to the World Health Organization, 2.4 million deaths each year are directly attributable to air pollution. Exposure to relatively high levels of the pollutant NO2 can cause respiratory problems, especially for those with preexisting health conditions. Motor vehicles, coal-fired power plants, metal refineries are prominent sources generated by humans. Natural sources of NO2 include forest fires, extreme heat from lightning, and soil microbes. 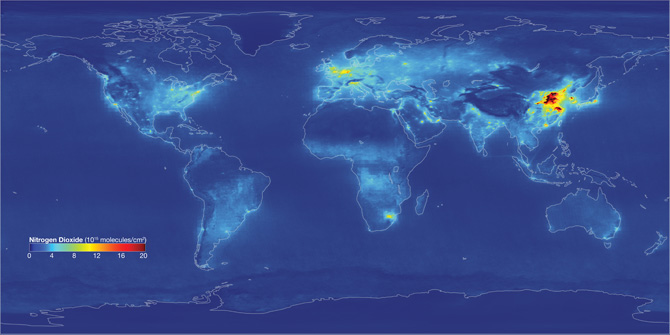 Measurements of NO2 are a good indicator of the geographical location of air pollution because NO2 has a life span of about a day and thus is concentrated near its sources. Looking at the distribution of NO2 on a world map, some of the highest levels are found in cities such as New York, Beijing, and Brussels. Much cleaner air is found in less urbanized areas such as in Greenland, northern South America, and western Australia. Maps of NO2 produced by the Aura’s Ozone Monitoring Instrument (OMI) science team give a global picture of industrial and agricultural activity providing valuable information for scientific researchers, and decision- and policy-makers world-wide.