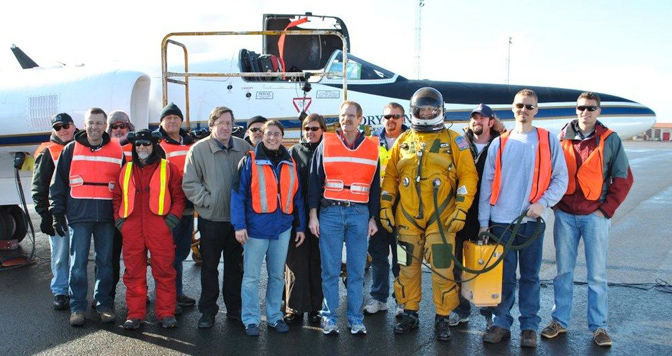 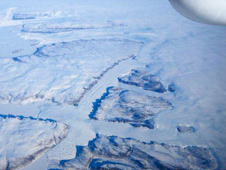 The convergence of two glaciers near Thule, Greenland can be seen in this photo from the cockpit of NASA's ER-2 Earth Resources aircraft during a MABEL laser altimeter validation flight. (NASA photo) › View Larger Image After an almost 10 and one-half hour transit flight from its deployment base in Keflavik, Iceland, NASA ER-2 pilot Stu Broce landed ER-2 806 April 27 at the Dryden Aircraft Operations Facility at Air Force Plant 42 in Palmdale, Calif. The lengthy flight from Iceland included data collection by the MABEL instrument over a portion of broadleaf deciduous forest in Wisconsin. The ground support and science crew that supported the flights returned several days later.

"We completed 100 percent of the science flights," said Broce, noting that they were able to acquire data on several additional ad hoc targets that were not in the original plan. "The weather cooperated, the plane worked well as did the science instruments."

The ER-2 flew more than 100 hours on 16 flights in the MABEL validation campaign, including 14 data collection flights over Greenland and surrounding sea ice areas and two transit flights between Keflavik and its home base in Palmdale. Several of the flights were conducted concurrently and on the same flight tracks as flights of other NASA environmental science aircraft involved in the Arctic IceBridge campaign in order to compare data being recorded by the MABEL with instruments on the other aircraft.

Broce had one word to describe the areas of Greenland over which the ER-2 flew: desolate. 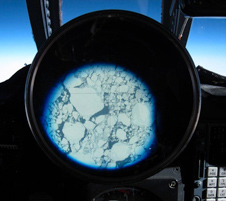 The partially broken sea ice pack below NASA's ER-2 can be clearly seen through the pilot's cockpit viewing sight during one of the MABEL laser altimeter validation flights. (NASA photo) › View Larger Image A former Air Force pilot, Broce had not flown in this area of the world before the MABEL mission. He noted that one flight took him to 84 degrees north latitude where, he commented, the sun is at a very low angle.

Targets of the flights included wide areas of Greenland's ice sheets and surrounding sea ice fields, the Jacobshavn, Svalbard and East Glaciers, and a volcano in Iceland.

NASA ER-2 research pilot Tim Williams, Dryden's senior representative on the deployment, noted that more than 5.5 terrabytes of data was collected by the MABEL laser altimeter, the Cloud Physics Lidar and other instruments on board the ER-2 during the mission.

MABEL was developed at NASA's Goddard Space Flight Center to simulate a similar instrument planned for NASA's IceSat-2 environmental satellite that is scheduled for launch in 2016. Scientists consider laser altimetry from satellites or aircraft to be the most accurate method of gauging changing elevations over a period of time, and thus determine the thickening or thinning of Arctic or Antarctic ice fields and sea ice related to climate change.

Flight and science team members participated in a number of public and educational outreach activities during their stay in Iceland, including briefings on MABEL and IceSAT-2 during a speech on climate by Iceland's president, to the U.S. ambassador and embassy personnel, and to middle- and high-school students, the University of Reykjavik and the Keiler Aviation Academy in Keflavik.