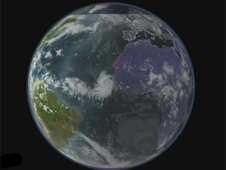 Earth's spatial details are evident in NASA's Blue Marble - Next Generation images, which are stitched together from a year's worth of observations from NASA's Terra satellite. Blue Marble has turned up in Earth science books, commercials, movies, and even on the welcome screen of the iPhone. Credit: NASA's Earth Observatory
> Larger image 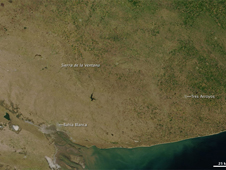 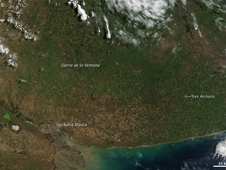 NASA's Terra satellite contrasts 2009 conditions (top) in southern Buenos Aires province with the conditions in 2008 (bottom), a more normal year. An analyst for the USDA Foreign Agricultural Service used the images in a presentation to show drought's impact on the region. Credit: NASA's Earth Observatory
> 2009 image: labeled
> 2009 image: unlabeled
> 2008 image: labeled
> 2008 image: unlabeled In 1968, an Apollo 8 astronaut took the iconic "Earthrise" photograph, reshaping our perspective of our home planet. Perspective has continued to evolve thanks to NASA's fleet of satellites that keep near-constant watch over the changing Earth. But what exactly do these satellites see, and what discoveries are they making?

To find out, just visit NASA's Earth Observatory, an online science magazine celebrating its 10th anniversary today (April 29). For the last decade, the Web site has been using stunning satellite imagery to tell the story of our planet and the NASA scientists who are working to help us understand how it works.

According to co-founder Kevin Ward, of NASA's Goddard Space Flight Center, Greenbelt, Md., the Earth Observatory has a simple but important goal: "We want to increase the number of people who know that NASA does Earth science."

Roughly 650,000 visitors come to this "virtual observatory" each month to browse images from Earth-observing satellites and to read about related discoveries. More than 50,000 people -- the number grows each week -- subscribe to the weekly newsletter. Five times in the past six years, the International Academy of Digital Arts and Sciences has awarded Earth Observatory the "People's Voice" or "Webby" award for best science or education site on the Web.

"Our readers include educators and students, scientists, and members of the media," said editor Rebecca Lindsey. "But mostly, they are just people who want to learn about Earth, the climate, and the environment."

The idea of the Earth Observatory was hatched in the late 1990s during an impromptu brainstorming session between the late Yoram Kaufman, then project scientist for NASA’s Terra satellite, and David Herring, whom Kaufman had hired to be the mission’s outreach coordinator. Returning from a conference at NASA's Jet Propulsion Laboratory in Pasadena, Calif. the two found themselves stuck in the back of a cab on an L.A. highway when an intense rainstorm brought traffic to a standstill.

Herring, now the communications director at NOAA's Climate Program Office, says he was always impressed with how easily Kaufman could talk to anyone about the importance of NASA's Earth science missions. "He was so passionate about it, and everyone responded to that," remembers Herring. In his talks, Kaufman often compared the Earth to a middle-aged patient whose doctor had started paying more attention to his vital signs. Satellites, he would say, are the equivalent of a doctor's stethoscope or thermometer.

As the rain pounded on their cab, Herring and Kauffman talked about how to use that metaphor to help people understand why we need to study the Earth and to see for themselves the critical role NASA satellites played in monitoring our planet's vital signs. They wanted to create a virtual observatory, where anyone on the Internet could see what NASA satellites were seeing and learn what scientists were learning.

The Earth Observatory has grown and evolved with the World Wide Web and NASA's presence on it. At first, new images were posted weekly; today, the team publishes several new images a day.

Featured images have ranged from a view of Hurricane Katrina as it moved ashore on August 29, 2005 as a Category-4 storm, to a space-based view of the route followed by Edmund Hillary and Tenzing Norgay as they summited Mount Everest in 1953. The team also publishes easy-to-understand pictures of the data that scientists use to study the planet; for example, a recent pair of images showed how the amount of old, thick Arctic sea ice is declining.

Arguably Earth Observatory's most striking image is the Blue Marble -- a detailed, true-color, composite image of Earth. Stitched together from a year's worth of observations from Moderate Resolution Imaging Spectroradiometer (MODIS) on Terra and developed by team members Reto Stöckli and Robert Simmon, the Blue Marble has turned up in numerous Earth science books, commercials, and movies. It’s even on the welcome screen of the iPhone.

Not Just a Web Toy

Some visitors to the Earth Observatory might simply enjoy the pictures. But others, including scientists, decision makers, reporters, and even users of social networking Web sites, use the site for teaching, informing, and sharing ideas about Earth science.

One such user is Commander Emil Petruncio, a former naval oceanographer who now serves as a professor at the United States Naval Academy in Annapolis, Md. "The Earth Observatory is a great resource for educators and for anybody interested in learning more about Earth remote sensing," Petruncio said. "I'm all for space exploration, but we can't forget that there's a lot of Earth left to explore. Satellite observations have led to startling discoveries in oceanography and will help guide future exploration."

Petruncio begins his remote-sensing class by asking students to discuss Earth Observatory's Image of the Day. Students talk about which satellite sensor produced the image, and use it as a "jumping off point" to delve into how to use satellite sensors to learn about the Earth, ocean, or atmosphere.

Denise McWilliams, a crop assessment analyst with the U.S. Department of Agriculture's Foreign Agricultural Service in Washington, D.C., uses the Earth Observatory for a different kind of audience. McWilliams is tasked with providing global food production assessments that are important for finding potential American markets and ensuring global food security.

As the analyst for South America, McWilliams used Earth Observatory images of dust storms off Buenos Aires to show colleagues and stakeholders the devastation brought on by recent drought in Argentina.

"When you see those images, you are faced with the reality that a dire drought occurred in Argentina this year," McWilliams said. "Climate is the one factor in agriculture that is difficult to illustrate without satellite images. Satellite images are critical for showing the extent to which weather can cripple a region or country."

Not Your Old-Fashioned Observatory

After ten years of measured growth and success, the Earth Observatory team of writers, web designers, scientists, and data visualizers continues to develop the site. A primary focus for the future is to expand their user base and to increase the number of people who syndicate the site's content, like the popular "Image of the Day."

In pursuit of that goal, the Earth Observatory has started to tap various social networking techniques, including Facebook and Twitter. In a little over a month, the group has collected almost 700 fans on Facebook and more than 500 Twitter followers.

One fan wrote: "Every week I learn something new and exciting from the Earth Observatory. I am so glad my tax dollars are supporting something so worthwhile!"