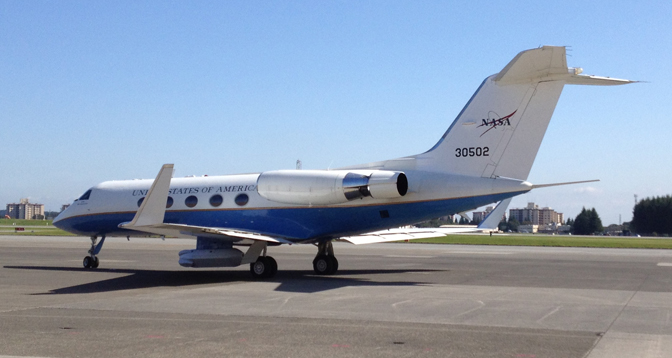 NASA's NASA's Airborne Science C-20A made a refueling stop at Eareckson Air Station on Shemya Island, Alaska, during a mission to image volcanoes in Alaska and the Aleutian Islands. The aircraft crew and mission scientists, led by NASA Dryden C-20A project manager John McGrath (kneeling at left), paused for a group photo by the air station sign before boarding the aircraft and continuing onto Japan for UAVSAR imaging of active volcanoes. (NASA / John McGrath) › View Larger Image UAVSAR provides a measurement system that complements satellite-based observations by providing rapid revisits and imaging of active volcanoes to better understand their deformation prior to, during or after an eruption.

The flight path took the aircraft north from California, imaging the volcanoes of the Western United States, en route to an overnight stay at Joint Base Elmendorf-Richardson near Anchorage, Alaska.

After departing Elmendorf, the NASA aircraft imaged volcanoes in Alaska and the Aleutian Islands before arriving at Yokota Air Base near Tokyo, Japan. Yokota was the staging location for science missions that collected data about volcanoes on several islands in Japan that pose a hazard to nearby populations.

Working closely with the Japan Aerospace Exploration Agency (JAXA), three volcano-imaging flights were flown from Yokota over various volcano and disaster monitoring sites throughout Japan between Oct. 5 and 8. The aircraft repeated the outbound routing during the return flights to its home base at the Dryden Aircraft Operations Facility in Palmdale, Calif.

"Preparation has been ongoing since May," McGrath commented. "We had tremendous support from both Elmendorf and Yokota air bases and our colleagues at JAXA."