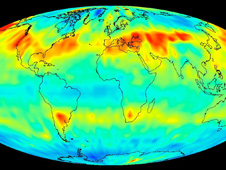 The AIRS instrument flies on NASA's Aqua satellite and is managed by the Jet Propulsion Laboratory, Pasadena, California, under contract to NASA. JPL is a division of the California Institute of Technology in Pasadena.