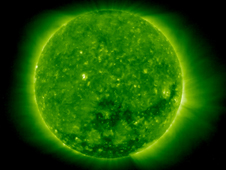 A coronal hole, the dark spot beginning just below the sun's center and extending to the right, is shown opening up in this image by NASA satellite STEREO. The NASA satellite SABER has detected a periodic "breathing" response in the Earth's upper atmosphere in response to never before observed regular coronal hole openings on the sun's surface. The coronal holes release high-powered solar winds that disturb the upper atmosphere of Earth and force it to emit energy to maintain the earth's radiation budget. Image credit: NASA/STEREO
San Francisco -- A NASA satellite has observed for the first time a "breathing," an expansion and contraction, of the Earth's upper atmosphere in response to periodic, high-speed solar winds.

Jeff Thayer, of the University of Colorado, Geoff Crowley, of Atmospheric and Space Technology Research Associates and Marty Mlynczak, of NASA Langley Research Center, will present their findings on Monday, Dec. 15 at 2 p.m. at the American Geophysical Union conference in San Francisco. The instrument, SABER, which stands for Sounding of the Atmosphere using Broadband Emission Radiometry, was developed at NASA Langley.

SABER has revealed solar flare-ups -- and a rapid Earth cooling response -- on a nearly regular nine-day schedule. The cause appears to be coronal holes, which project strong solar winds, positioned 120 degrees apart on the sun’s surface. As the sun rotates every 27 days, these solar winds typically hit Earth every nine days. The high-speed winds sometimes appear with a seven-day periodicity, indicating that a fourth hole opens up.

Sunspots unleash solar flares that create a ripple effect well beyond Earth. But when that energy flow does reach Earth, the atmosphere reciprocates by ejecting radiation as a cooling effect to maintain the planet's energy balance. That cooling response creates the expansion and contraction of the upper atmosphere.

"No one's ever seen this type of data because it's never been measured," said Mlynczak, SABER's associate principal investigator.

The findings open the possibility of improving predictions of satellite drag (which are important for tracking low earth orbiting spacecraft) and predictions of the ionospheric electron concentration, which affects radio communications and GPS signals. The periodic nature of the solar disturbances may also influence the climate and climate change of the upper atmosphere.

"It seems these periodicities have appeared in this last solar cycle, not necessarily in the previous two cycles," said Janet Kozyra, George Carignan research professor at the University of Michigan, who has worked with SABER data. "This was never reported in past solar cycles."

Kozyra said learning about a regular feature of a climate system advances knowledge.

"When you have a periodic behavior in a chaotic system, it helps you to predict," she said. "We learn a lot about how the whole system functions."

Through the end of September 2008, the sun was "spotless" on 200 days of the year. Not a single sunspot flared up on those days. The Earth's reaction to this period has been dramatic and directly observed for the first time. In addition to observing the nearly clockwork response to coronal holes opening up on the sun's surface, SABER has also observed the Earth's upper atmosphere's muted response to the sun's lull – one of its quietest periods in half a century.

SABER, operating since 2002, has been approved for four more years of operation, which should allow for a critical 11-year data set. That would cover the radiative activity of Earth's upper atmosphere for the entirety of an 11-year solar cycle.

In addition to the "breathing," the atmosphere’s response to the sun’s sometimes furious, sometimes-quiet activity has surprised Mlynczak in a number of ways.

In the quiet solar year of 2008, for instance, the upper atmosphere’s ultraviolet radiation emissions have dipped to levels 10 times lower than when SABER’s observations began in 2002. At the same time, SABER detects far more short-term changes in solar activity than previously thought.

"It looks noisy," Mlynczak said. "But it's not statistical noise, it's not instrument noise. It's geophysical noise."

SABER also spots massive spikes in energy flow that rise and then dissipate quickly. The atmosphere, it turns out, can dump radiation into space extremely efficiently to respond to a burst of solar activity and maintain Earth's radiation budget.

Kozyra has been fascinated by the role the sun continues to play in Earth's upper atmosphere even during one of the quietest solar periods in centuries. She expected that this solar minimum would allow for study of how the troposphere influences the rest of the upper atmosphere without solar interference.

"What we actually found was that it didn't happen. We were seeing the atmosphere was being very strongly driven by the sun," Kozyra said. "That's very surprising. We're learning more about what space weather looks like, and it wasn't what we thought."

Questions follow these discoveries. Do the short-term fluctuations need to be programmed into climate prediction models? Mlynczak isn't sure yet. Getting it right will be important to the continued refinement of climate prediction.