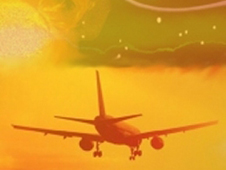 A NASA Langley-led effort is trying to build a better model to predict the amount of damaging radiation pilots, flight crews and frequent flyers are exposed to on commercial airline flights. While flight crews are designated by the federal government as "radiation workers," just like nuclear plant employees and X-ray technicians, there are no industry standards for radiation exposure or consistently used methods for measuring exposure. Image credit: NASA

San Francisco -- A group of researchers led by NASA, in collaboration with Space Environment Technologies, Inc., the National Center for Atmospheric Resarch (NCAR), and Dartmouth College, are building a model that can predict the solar and cosmic radiation exposure for crews and passengers on commercial airline flights. Researchers will be presenting their preliminary work at the American Geophysical Union meeting in San Francisco on Friday, Dec. 19.

While it may not be commonly known, airline flight crews are currently classified as "radiation workers," a federal designation that means they are consistently exposed to radiation. Flight crews on high-latitude routes, in fact, are exposed to more radiation on an annual basis than nuclear plant workers.

But unlike in other fields, radiation exposure is not measured in the airline industry, nor are there standards or limits regarding exposure.

A NASA Applied Sciences project called NAIRAS, Nowcast of Atmosphere Ionizing Radiation for Aviation Safety, seeks to build tools that use real-time data and modeling to estimate radiation exposure. The issue has been of concern to pilots, crews and scientists for some time, but this will be the first real-time, data-driven, global model to predict not just cosmic background radiation, but also radiation during solar storm events.

Passengers and flight crews are exposed to radiation because the shielding from Earth's atmosphere against high-energy solar particles and cosmic rays is weaker at normal cruising altitudes than at the surface. The threat is even greater for flight paths that take planes near the poles, because the momentum shielding by Earth's magnetic field is weaker at high latitudes. The concern is greatest for flight crews and frequent flyers because of their consistent exposure over long periods.

Christopher Mertens, a senior research scientist at NASA Langley Research Center and the NAIRAS principal investigator, said the model should provide the most accurate estimations yet of the biologically damaging radiation doses received by airline crews and passengers. The model will use measurements from ground-based neutron monitors, atmospheric temperature and density, solar particle flux and solar wind parameters to "nowcast" exposure levels. Measurements from the NASA Advanced Composition Explorer (ACE) spacecraft and NOAA GOES satellites are used in the model.

"The idea is you combine real-time data with accurate models to predict," said Mertens, who helped develop a radiation dosage model for light-ion radiotherapy. "We need an ability to measure and predict."

John Murray, a Langley research scientist who specializes in satellite aviation-weather products, said including solar, atmospheric and magnetosphere activity into the model will make it stand apart.

"This will help the FAA (Federal Aviation Administration) to determine what standards may be needed in order to address the increasing concerns that the industry and public have over human exposure to ionizing radiation," Murray said.

Most aviation-related research on cosmic radiation has focused on the potential damage to communication and navigation technology, Mertens said. But little has centered on human health impacts.

NASA first investigated the issue in the 1960s and 1970s when it was studying the feasibility of high-altitude supersonic commercial aviation transport, Mertens said. At the time radiation exposure during flight was deemed a negligible health concern for commercial aircraft at cruising altitudes given what was known about radiation and the number and types of flights common at that time.

Concerns have grown for three primary reasons. Pilots log twice as many flight hours now as then, while flight attendants typically log more hours than pilots. Epidemiological studies have shown this type of exposure to be more damaging than previously thought. And, the number of polar flights is increasing, Mertens said.

Airlines prefer polar routes – for instance, for certain U.S.-to-northern Europe or U.S.-to-Asia routes – because it's a shorter route with reduced head winds, creating fuel savings of tens of thousands of dollars per flight.

Preliminary research indicates that passengers and crews are being exposed to more radiation than previously thought, especially during significant solar events. Mertens analyzed data from a strong solar storm around Halloween 2003 and found that passengers on polar flights – for example from Chicago to Beijing – were exposed to radiation higher than the limit recommended by the International Commission on Radiological Protection. In addition, not including new features in the model such as magnetic storm effects on Earth's magnetic field underestimated the exposure during that storm by a factor of four.

"People on that flight exceeded their radiation exposure limit, and they don't even know it," Mertens said.

The system could also eventually be used to log radiation exposure for flight crews by year and even by career, so that pilots and attendants can keep track of their personal risk.

NAIRAS, funded in the spring of 2008 by NASA's Applied Sciences Program, is scheduled to be a three-year program. Mertens said he hopes the research will lead to improved methods for measuring radiation, predicting radiation levels and a better system to mitigate exposure for passengers, pilots and flight attendants. The research could also lead to the development of onboard instruments that would give pilots real-time radiation estimates on their control panels, alongside the rest of their instruments.

Murray said the model will be available upon completion to the Centers for Disease Control's National Institute for Occupational Safety and Health (NIOSH), the National Oceanic and Atmospheric Administration’s Space Weather Prediction Center, the Air Force Research Laboratory and the FAA.