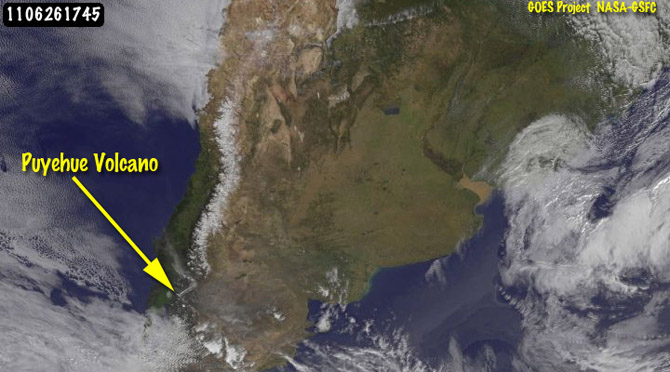 Satellite data from the Geostationary Operational Environmental Satellites called GOES-13 and GOES-11, both managed by NOAA, have been providing images of the volcanic plume since the eruption began on June 4, 2011. Those images were created at NASA's GOES Project located at NASA's Goddard Space Flight Center, Greenbelt, Md. The images were compiled into an animation and sped up to show several days worth of eruptions in less than a minute.

Dennis Chesters of the NASA GOES Project noted of the animation, "The Chilean caldera still emits a steady stream of ash, three weeks after the initial eruption. Fortunately, the volume is much less, and the cold winter wind from the south carries it up the coast out over the Pacific, instead of over the Andes into Argentina."

According to CNN on June 28, the volcanic ash cloud was still affecting air travel in New Zealand, Australia. The eruptions of the Puyehue volcano, located in Puyehue National Park in the Andes of Ranco Province of Chile have also caused flight delays and cancellations in Argentina, Brazil, Chile and Uruguay. Rob Gutro
NASA's Goddard Space Flight Center, Greenbelt, Md.
› Back To Top