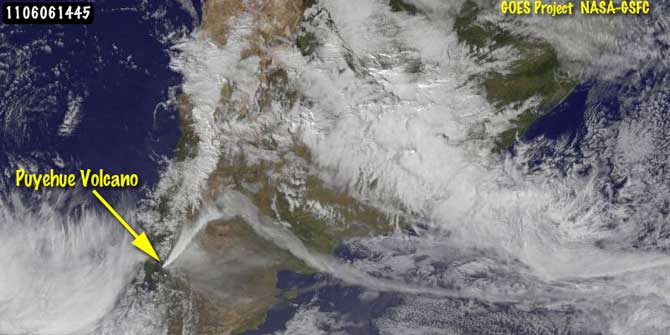 › View movie of the eruption
This visible image from GOES-13 on June 6, 2011 at 10:45 a.m. EDT and shows the ash plume from the Puyehue-Cordón Caulle volcano in Chile (lower left). Credit: NASA GOES Project, Dennis Chesters

This super-fast animation includes 445 visible and infrared images from the GOES-13 satellite that runs from June 4 at 1:45 p.m. EDT to June 16 at 13:05 (9:05 a.m. EDT) and shows the ash plume from the Puyehue-Cordón Caulle volcano in Chile (lower left). TRT: 1:14 minutes. (Credit: NASA GOES Project, Dennis Chesters)

The NASA/NOAA GOES satellite Project released a satellite animation of two-weeks of eruptions from the Puyehue-Cordón Caulle volcano in Chile.

The Geostationary Operational Environmental Satellite called GOES-13 has been taking continual images of the volcano from its vantage point in space since the eruption began on June 4. The GOES series of satellites are managed by NOAA, and the animation was created by the NASA/NOAA GOES Project, located at NASA's Goddard Space Flight Center in Greenbelt, Md. The animation includes visible and infrared imagery and has a total running time of 1:14 minutes. This movie contains all 445 images taken by GOES-13 since the eruption began.

Chile's National Service of Geology and Mining noted that on the day of the eruption the ash cloud reached as high as six miles (about 10 kilometers) into the atmosphere. On June 16, ash and smoke reached almost two miles high (~ three kilometers). The ash went high enough into the atmosphere to get caught in a jet stream that carried it around the world and caused problems for air travel as far away as Australia and New Zealand.

"In the GOES-13 satellite video, ash is continuously ejected into a series of austral winter storms of the "roaring 40's" which carry it as far east as New Zealand, endangering air traffic there," said Dennis Chesters of NASA's GOES Project at Goddard. "Stuttering puffs on June 16, 2011 gave hope that the volcanic eruptions are slowing down."