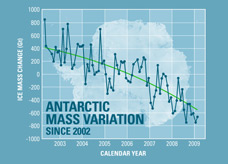 The continent of Antarctica has been losing more than 100 cubic kilometers (24 cubic miles) of ice per year since 2002. Larger Image


There has been lots of talk lately about Antarctica and whether or not the continent's giant ice sheet is melting. One new paper 1, which states there’s less surface melting recently than in past years, has been cited as "proof" that there’s no global warming. Other evidence that the amount of sea ice around Antarctica seems to be increasing slightly 2-4 is being used in the same way. But both of these data points are misleading. Gravity data collected from space using NASA's Grace satellite show that Antarctica has been losing more than a hundred cubic kilometers (24 cubic miles) of ice each year since 2002. The latest data reveal that Antarctica is losing ice at an accelerating rate, too. How is it possible for surface melting to decrease, but for the continent to lose mass anyway? The answer boils down to the fact that ice can flow without melting. 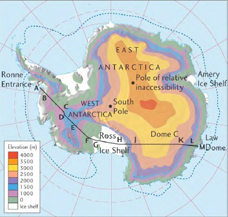 The Antarctic ice sheet. East Antarctica is much higher in elevation than West Antarctica. Larger Image


Two-thirds of Antarctica is a high, cold desert. Known as East Antarctica, this section has an average altitude of about 2 kilometer (1.2 miles), higher than the American Colorado Plateau. There is a continent about the size of Australia underneath all this ice; the ice sheet sitting on top averages at a little over 2 kilometer (1.2 miles) thick. If all of this ice melted, it would raise global sea level by about 60 meter (197 feet). But little, if any, surface warming is occurring over East Antarctica. Radar and laser-based satellite data show a little mass loss at the edges of East Antarctica, which is being partly offset by accumulation of snow in the interior, although a very recent result from the NASA/German Aerospace Center's Gravity Recovery and Climate Experiment (Grace) suggests that since 2006 there has been more ice loss from East Antarctica than previously thought 5. Overall, not much is going on in East Antarctica -- yet.

West Antarctica is very different. Instead of a single continent, it is a series of islands covered by ice -- think of it as a frozen Hawaii, with penguins. Because it's a group of islands, much of the West Antarctic Ice Sheet (WAIS, in the jargon) is actually sitting on the floor of the Southern Ocean, not on dry land. Parts of it are more than 1.7 kilometer (1 mile) below sea level. Pine Island is the largest of these islands and the largest ice stream in West Antarctica is called Pine Island Glacier. The WAIS, if it melted completely, would raise sea level by 5 to 7 meter (16 to 23 feet). And the Pine Island Glacier would contribute about 10 percent of that. 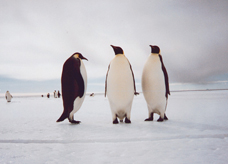 West Antarctica is a series of islands covered by ice. Think of it as a frozen Hawaii, with penguins. (Image credit: National Science Foundation) Larger Image


Since the early 1990s, European and Canadian satellites have been collecting radar data from West Antarctica. These radar data can reveal ice motion and, by the late 1990s, there was enough data for scientists to measure the annual motion of the Pine Island Glacier. Using radar information collected between 1992 and 1996, oceanographer Eric Rignot, based at NASA’s Jet Propulsion Laboratory (JPL), found that the Pine Island Glacier's "grounding line" -- the line between the glacier's floating section and the part of the glacier that rests on the sea floor -- had retreated rapidly towards the land. That meant that the glacier was losing mass. He attributed the retreat to the warming waters around West Antarctica 6. But with only a few years of data, he couldn't say whether the retreat was a temporary, natural anomaly or a longer-term trend from global warming.

Rignot's paper surprised many people. JPL scientist Ron Kwok saw it as demonstrating that "the old idea that glaciers move really slowly isn't true any more." One result was that a lot more people started to use the radar data to examine much more of Antarctica. A major review published in 2009 found that Rignot's Pine Island Glacier finding hadn't been a fluke 7: a large majority of the marine glaciers of the Antarctic Peninsula were retreating, and their retreat was speeding up. This summer, a British group revisited the Pine Island Glacier finding and found that its rate of retreat had quadrupled between 1995 and 2006 8.

How the Ice Shelf Crumbles

The retreat of West Antarctica's glaciers is being accelerated by ice shelf collapse. Ice shelves are the part of a glacier that extends past the grounding line towards the ocean they are the most vulnerable to warming seas. A longstanding theory in glaciology is that these ice shelves tend to buttress (support the end wall of) glaciers, with their mass slowing the ice movement towards the sea, and this was confirmed by the spectacular collapse of the Rhode Island-sized Larsen B shelf along the Eastern edge of the Antarctic Peninsula in 2002. The disintegration, which was caught on camera by NASA's Moderate Resolution Imaging Spectroradiometer (MODIS) imaging instruments on board its Terra and Aqua satellites, was dramatic: it took just three weeks to crumble a 12,000-year old ice shelf. Over the next few years, satellite radar data showed that some of the ice streams flowing behind Larsen B had accelerated significantly, while others, still supported by smaller ice shelves, had not 9. This dynamic process of ice flowing downhill to the sea is what enables Antarctica to continue losing mass even as surface melting declines.

Michael Schodlok, a JPL scientist who models the way ice shelves and the ocean interact, says melting of the underside of the shelf is a pre-requisite to these collapses. Thinning of the ice shelf reduces its buttressing effect on the glacier behind it, allowing glacier flow to speed up. The thinner shelf is also more likely to crack. In the summer, meltwater ponds on the surface can drain into the cracks. Since liquid water is denser than solid ice, enough meltwater on the surface can open the cracks up deeper down into the ice, leading to disintegration of the shelf. The oceans surrounding Antarctica have been warming 10, so Schodlok doesn't doubt that the ice shelves are being undermined by warmer water being brought up from the depths. But he admits that it hasn't been proven rigorously, because satellites can’t measure underneath the ice.

Glaciologist Robert Bindschadler of NASA's Goddard Space Flight Center intends to show just that. He's leading an expedition scheduled to start in 2011 to drill through the Pine Island Glacier and place an automated buoy into the water below it. According to Bindschadler, Pine Island Glacier "is the place to go because that is where the changes are the largest. If we want to understand how the ocean is impacting the ice sheet, go to where it's hitting the ice sheet with a sledgehammer, not with a little tack hammer."

Meanwhile, measurements from the Grace satellites confirm that Antarctica is losing mass 11. Isabella Velicogna of JPL and the University of California, Irvine, uses Grace data to weigh the Antarctic ice sheet from space. Her work shows that the ice sheet is not only losing mass, but it is losing mass at an accelerating rate. "The important message is that it is not a linear trend. A linear trend means you have the same mass loss every year. The fact that it’s above linear, this is the important idea, that ice loss is increasing with time," she says. And she points out that it isn’t just the Grace data that show accelerating loss; the radar data do, too. "It isn't just one type of measurement. It's a series of independent measurements that are giving the same results, which makes it more robust."