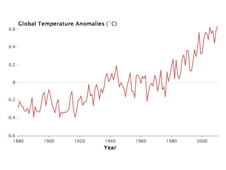 In 2010, global temperatures continued to rise. A new analysis from the Goddard Institute for Space Studies shows that 2010 tied with 2005 as the warmest year on record, and was part of the warmest decade on record. Credit: NASA/Earth Observatory/Robert Simmon
› Download PDF WASHINGTON -- Global surface temperatures in 2010 tied 2005 as the warmest on record, according to an analysis released Wednesday by researchers at NASA's Goddard Institute for Space Studies (GISS) in New York.

The two years differed by less than 0.018 degrees Fahrenheit. The difference is smaller than the uncertainty in comparing the temperatures of recent years, putting them into a statistical tie. In the new analysis, the next warmest years are 1998, 2002, 2003, 2006, 2007 and 2009, which are statistically tied for third warmest year. The GISS records begin in 1880.

The analysis found 2010 approximately 1.13 F warmer than the average global surface temperature from 1951 to 1980. To measure climate change, scientists look at long-term trends. The temperature trend, including data from 2010, shows the climate has warmed by approximately 0.36 F per decade since the late 1970s.

"If the warming trend continues, as is expected, if greenhouse gases continue to increase, the 2010 record will not stand for long," said James Hansen, the director of GISS.

The analysis produced at GISS is compiled from weather data from more than 1000 meteorological stations around the world, satellite observations of sea surface temperature and Antarctic research station measurements. A computer program uses the data to calculate temperature anomalies -- the difference between surface temperature in a given month and the average temperature for the same period during 1951 to 1980. This three-decade period acts as a baseline for the analysis.

The resulting temperature record closely matches others independently produced by the Met Office Hadley Centre in the United Kingdom and the National Oceanic and Atmospheric Administration's National Climatic Data Center.

The record temperature in 2010 is particularly noteworthy, because the last half of the year was marked by a transition to strong La Niña conditions, which bring cool sea surface temperatures to the eastern tropical Pacific Ocean.

"Global temperature is rising as fast in the past decade as in the prior two decades, despite year-to-year fluctuations associated with the El Niño-La Niña cycle of tropical ocean temperature," Hansen and colleagues reported in the Dec. 14, 2010, issue of Reviews of Geophysics.

A chilly spell also struck this winter across northern Europe. The event may have been influenced by the decline of Arctic sea ice and could be linked to warming temperatures at more northern latitudes.

Arctic sea ice acts like a blanket, insulating the atmosphere from the ocean's heat. Take away that blanket, and the heat can escape into the atmosphere, increasing local surface temperatures. Regions in northeast Canada were more than 18 degrees warmer than normal in December.

The loss of sea ice may also be driving Arctic air into the middle latitudes. Winter weather patterns are notoriously chaotic, and the GISS analysis finds seven of the last 10 European winters warmer than the average from 1951 to 1980. The unusual cold in the past two winters has caused scientists to begin to speculate about a potential connection to sea ice changes.

"One possibility is that the heat source due to open water in Hudson Bay affected Arctic wind patterns, with a seesaw pattern that has Arctic air downstream pouring into Europe," Hansen said.