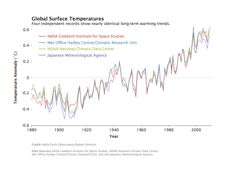 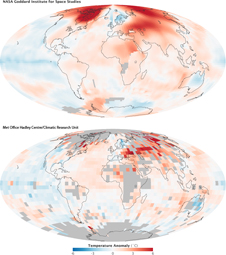 There are large areas in the Arctic without weather stations. NASA GISS approaches the problem by filling in gaps with data from the nearest land stations. The Climatic Research Unit at the University of East Anglia, which works jointly with the Met Office Hadley Centre, leaves much of the region out of its global temperature analysis. Credit: NASA Earth Observatory/Robert Simmon
› Larger image 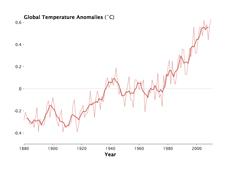 In 2010, global temperatures continued to rise. A new analysis from the Goddard Institute for Space Studies shows that 2010 tied with 2005 as the warmest year on record, and was part of the warmest decade on record. The thin line represents annual data, while the thick line is a five-year running mean. Credit: NASA Earth Observatory/Robert Simmon
› Dowload detailed PDF Groups of scientists from several major institutions – NASA’s Goddard Institute for Space Studies (GISS), NOAA's National Climatic Data Center (NCDC), the Japanese Meteorological Agency and the Met Office Hadley Centre in the United Kingdom – tally data collected by temperature monitoring stations spread around the world and make an announcement about whether the previous year was a comparatively warm or cool year.

NASA’s announcement this year – that 2010 ties 2005 as the warmest year in the 131-year instrumental record – made headlines. But, how much does the ranking of a single year matter?

Not all that much, emphasizes James Hansen, the director of NASA’s Goddard Institute for Space Studies (GISS) in New York City. In the GISS analysis, for example, 2010 differed from 2005 by less than 0.01°C (0.018 °F), a difference so small that the temperatures of these two years are indistinguishable, given the uncertainty of the calculation.

Even for a near record-breaking year like 2010 the broader context is more important than a single year. “Certainly, it is interesting that 2010 was so warm despite the presence of a La Niña and a remarkably inactive sun, two factors that have a cooling influence on the planet, but far more important than any particular year’s ranking are the decadal trends,” Hansen said.

One of the problems with focusing on annual rankings, rather than the longer trend, is that the rankings of individual years often differ in the most closely watched temperature analyses – from GISS, NCDC, and the Met Office – a situation that can generate confusion.

“In reality, nothing could be further from the truth,” said Hansen. Global temperatures have continued to rise steadily. “The three official records vary slightly because of subtle differences in the way we analyze the data, but they agree extraordinarily well,” said Reto Ruedy, one of Hansen’s colleagues at GISS who helps analyze global surface temperatures.

All three records show peaks and valleys that vary in virtual sync with each other since 1880. All three show particularly rapid warming in the last few decades. And all three show the last decade is the warmest in the instrumental record.

There are several reasons for the small discrepancies that exist between the three records. Most important, subtleties in the way the scientists from each institution handle regions of the world where temperature-monitoring stations are scarce produce differences.

While developed areas have a dense network of weather stations, temperature monitoring equipment is sparse in some parts of the Amazon, Africa, Antarctica, and Arctic. In the Arctic, particularly, the absence of solid land means there are large areas without weather stations.

The Met Office and the NCDC leave areas of the Arctic Ocean without stations out of their analyses, while GISS approaches the problem by filling in the gaps with data from the nearest land stations, up to a distance of 1200 kilometers (746 miles) away. In this way, the GISS analysis achieves near total coverage in the Arctic.

Both approaches pose problems. By not inferring data, the Met Office assumes that areas without stations have a warming equal to that experienced by the entire Northern Hemisphere, a value that satellite and field measurements suggest is too low given the rate of Arctic sea ice loss.

On the other hand, GISS’s approach may either overestimate or underestimate Arctic warming. “There’s no doubt that estimates of Arctic warming are uncertain, and should be regarded with caution,” Hansen said. “Still, the rapid pace of Arctic ice retreat leaves little question that temperatures in the region are rising fast, perhaps faster than we assume in our analysis.”

Choosing a Base Period

To calculate temperature anomalies scientists compare average temperatures over any given time period -- a month or year, for example -- to a long-term average, or base period. The base period serves as a point of reference against which climate change can be tracked.

This means that numerical values of the temperature anomalies differ for the three analyses. However, the choice of base period should have no effect on the ranking of different years or on the magnitude of global warming over the past century.

Invariably, a great deal of attention centers on each year’s ranking, but it is critical to focus on the decade-long trends that matter more, the GISS scientists emphasize. On that time scale, the three records are unequivocal: the last decade has been the warmest on record. “It’s not particularly important whether 2010, 2005, or 1998 was the hottest year on record,” said Hansen. "It is the underlying trend that is important."