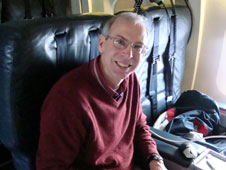 What if you were embarking on a road trip and you had an on-board tool, complete with video screen, that let you view your projected route, real-time traffic information and current weather, at any time during the journey? Not only that, but friends and family anywhere else in the world could follow your progress on a home computer. Sound good?

NASA scientists flying over the Arctic this month on the largest airborne experiment ever to study the role of air pollution in that region had such a tool at their disposal. The Real Time Mission Monitor, developed by NASA researchers, assembles the data from all the research satellites, aircraft and surface sensors and displays the "big picture," overlaid on Google Earth, for the whole team of scientists to view at the same time anywhere during the live mission.

This is the third and most complex test-drive for the monitor. The web-based system was first tested in 2006 to help look for clues about conditions that foster hurricane development off the coast of Africa. Last year, the monitor got another shakedown during NASA’s airborne mission studying tropical weather conditions over Costa Rica.

Now, scientists hard at work on the NASA Arctic Research of the Composition of the Troposphere from Aircraft and Satellites mission, or ARCTAS, have used the Real Time Mission Monitor to help them conduct their field operations.

The ARCTAS campaign includes two aircraft deployments, each three weeks in duration, in spring and summer 2008. The ARCTAS spring deployment, which ended April 20 in Fairbanks, Alaska, gathered critical information about the effects of arctic haze, stratosphere-troposphere exchange, and sunrise photochemistry. The summer deployment, scheduled for June 26 to July 14 in Cold Lake, Alberta, will investigate how local emissions from northern forest wildfires affect the composition of the Arctic atmosphere.

ARCTAS scientists want to know why the Arctic environment has been rapidly changing. From vantage points aboard NASA aircraft, they will take a look at the dynamics and effects of pollution transported to and around the region. Information gathered from the aircraft will help validate critical NASA satellite data and provide clues about phenomena like the recent decline of Arctic sea ice.

"For this experiment, having current information on where clouds and pollution plumes are occurring in the atmosphere can greatly improve science measurements," says senior research scientist Richard Blakeslee of Marshall Space Flight Center, a developer of the Real Time Mission Monitor. "Because the monitor combines displays of the positions and tracks of all the mission aircraft with near-real-time satellite imagery, model forecasts of aerosols and pollution, and research satellite overpass predictions, it helps the science team make urgent decisions about where exactly to fly to get the best measurements." 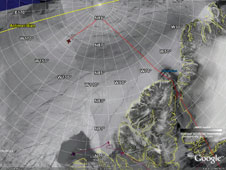 The NASA DC8 (near North Pole) and P3 (northern Canada) observe and sample the Arctic atmospheric composition on 9 April 2008 during return flights to Fairbanks, Alaska from Thule, Greenland. MODIS satellite infrared composite images help guide aircraft over the Arctic Ocean. Image credit: NASA/MSFC
"The Real Time Mission Monitor was very useful last week when high winds caused the DC-8 flight to divert from Thule, Greenland, to Iqaluit, Canada," said James Crawford, ARCTAS program manager. "At first, the primary concern of the pilots was getting to Iqaluit. However, the ability to monitor the situation allowed the mission planners time to re-consult satellite observations and model forecasts, leading to the decision to direct the DC-8 toward a hotspot of bromine radicals observed by NASA’s Aura satellite, a chemical associated with ozone depletion. A low pass with the aircraft over the area of interest was possible before landing in the new location."

The integration and delivery of this kind of information is made possible through data acquisition systems, network communication links and network server resources developed and managed by researchers at the National Space Science and Technology Center (NSSTC) in Huntsville, Ala., and NASA's Dryden Flight Research Center in Edwards, Calif. The NSSTC is a joint research facility managed by NASA's Marshall Space Flight Center in Huntsville and seven Alabama research universities.

"The value of network communications for airborne science operations cannot be underestimated," says Larry Freudinger, Dryden project lead for developing system components that provide communication and computing services between the aircraft and the ground. "The Real Time Mission Monitor gives the researcher intuitive, browsable views into a distributed web of dynamic data sources and processing components. The network is the instrument by which collective observations morph into timely decisions that improve productivity."

The network also is enhancing mission operations in other ways. In addition to the Real Time Mission Monitor display, scientists and mission managers anywhere on the ground or in the air can communicate using an integrated instant messaging and voice communication service linked to the monitor.

The network in this case starts with gateways that use the Iridium satellite constellation to enable anywhere, anytime connectivity with each aircraft, which has multiple satellite links for improved bandwidth and reliability. The ground station at Dryden provides Internet access for the aircraft, while servers at Marshall gather satellite imagery, weather and atmospheric chemistry forecast models and any other elements needed for the ARCTAS Real Time Mission Monitor. Each airplane similarly has a set of servers to support data management, communication and applications used by onboard instrument teams.