Grow Text SizeShrink Text Size
NASA Provides Satellite Views of Nor'easter Lifespan
NASA and NOAA satellites have provided animations and images of the coupling of two low pressure areas that created the now historic winter-time nor'easter that brought more than two feet of snow to portions of the New England states on Feb. 8 and 9, 2013. NASA released an animation of NOAA satellite imagery that shows the lifetime of the historic nor'easter.


The nor'easter dropped between 2 and 3 feet of snowfall over the U.S. Northeast and left more than 650,000 without power in eight states, according to the Associated Press. Several governors established travel bans on Saturday, Feb. 9, to promote clean-up efforts.

NOAA's GOES-13 satellite sits in a fixed orbit over the eastern United States and continually provides visible and infrared imagery of the movement of weather systems. NOAA manages the GOES satellite. The NOAA image data was compiled into an animation by NASA's GOES Project at NASA's Goddard Space Flight Center in Greenbelt, Md. 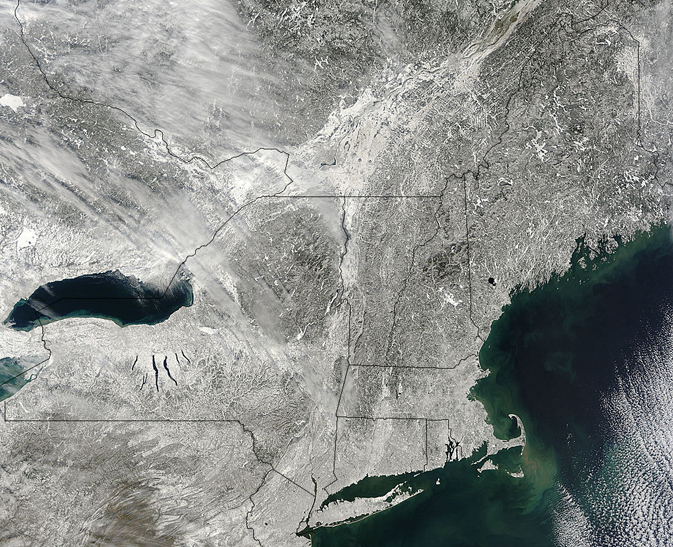 The animation runs from Feb. 6 through 9, 2013, and shows two low pressure areas move from the upper Midwest and the Gulf of Mexico and come together over the Atlantic Ocean near the Mid-Atlantic States. 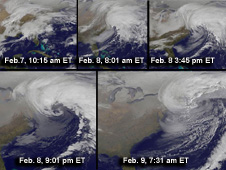 The two low pressure areas formed the nor'easter that brought heavy snowfall to the U.S. Northeast. New England was the victim of a winter cold front and a Gulf-enhanced warm front merging into a classic nor'easter off the coast of New Jersey. The merged storm was held along the coast by a blocking high pressure area in eastern Canada.

According to WCVB-TV, Boston, at 7 a.m. EST on Saturday, Feb. 9, there were about 400,000 customers without power in Massachusetts. The storm had moved east by 2 p.m. EST leaving behind blue skies and gusty winds.