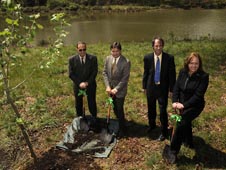 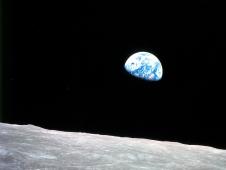 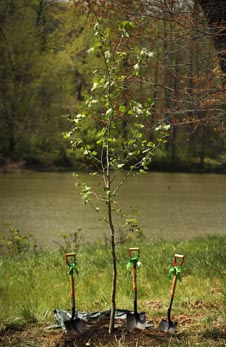 A second generation Sycamore 'moon' tree was newly planted in celebration of Earth Day 2009 and the 40th Anniversary of the first Apollo moon landing at the National Arboretum. Image Credit: NASA/Bill Ingalls. Click image to enlarge. NASA, the United States National Arboretum and American Forests teamed up Wednesday to celebrate Earth Day 2009 by planting a historic Moon Sycamore on the arboretum's grounds in Washington.

During the Apollo 14 moon mission in 1971, NASA astronaut Stuart Roosa, a former U.S. Forest Service smoke jumper, took with him tree seeds from a Loblolly Pine, Sycamore, Sweet Gum, Redwood, and Douglas Fir. After Roosa's return to Earth, the original seeds were germinated by the U.S. Forest Service and the result was "moon trees." Moon trees now grow at state capitols and university campuses across the nation. A Moon Sycamore also shades Roosa's grave at Arlington National Cemetery.

"Astronauts have described the view of Earth as a grand oasis in the vastness of space," said Alan Ladwig, a senior advisor to the NASA administrator. "Since any good oasis comes with lots of greenery, it is fitting that today we plant this Sycamore, which is a legacy tree grown from descendant seeds of Stuart Roosa's original Apollo experiment. It is a solid reminder that space exploration and life here on Earth are inextricably tied."

Ladwig, who represented NASA at the ceremony, also recalled the words of Apollo 8 astronaut Bill Anders after he snapped the historic Earthrise photo on December 1968: "We came all this way to explore the moon and the most important thing is that we discovered the Earth.

NASA continues to study Earth from the unique vantage point of space with 15 Earth observing satellites now in orbit. Another 11 Earth missions are in development or under study.

American Forests, the nation’s oldest conservation organization, continues the legacy of this unique Apollo-era tree program by maintaining second generation moon trees and making them available for sale to the public through their Historic Trees Program.

"Like space exploration, trees can also capture one’s imagination," said Deborah Gangloff, executive director of American Forests. "To plant a tree grown from one set out by George Washington or appreciated by Frederick Douglass or from a seed taken to the moon, connects us with important people and events in history. By planting this Moon tree today, we hope to inspire a new generation to imagine the stars while protecting our life-giving environment."

American Forests’ mission is to grow a healthier world by working with communities on local efforts that restore and maintain forest ecosystems. Its work encompasses planting trees, calculating the value of urban forests, fostering environmental education, and improving public policy for trees at the national level. The organization has a goal of having100 million trees planted by 2020.

For additional information about the Moon Trees, visit:

To get information about NASA's 40th Apollo anniversary, visit:

For more information about NASA and Earth Day, visit: