Air Quality Forecasts See Future in Space
Weather broadcasts have long been a staple for people planning their day. Now with the help of NASA satellites, researchers are working to broaden daily forecasts to include predictions of air quality, a feat that is becoming reality in some parts of the world.

Some scientists predict that an operational system of routine, global forecasts of air pollution near the ground, where it affects human health, is only a few years away. Such a system could prove useful in efforts to improve air quality, assess the effectiveness of environmental regulations and address the challenge of climate change. Advances in air quality monitoring and forecasts are being discussed this week at the American Geophysical Union meeting in San Francisco. 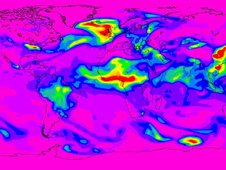 A preliminary forecast by Europe's GEMS project predicts regions expected to have elevated levels of aerosols (yellow and red) on Dec. 5, 2007. Click image for enlargement. Credit: Jean-Jacques Morcrette/ECMWF "Regional modeling is already getting quite meaningful," says Richard Engelen of the European Centre for Medium-Range Weather Forecasts in Reading, United Kingdom. He notes that air quality forecasts are now possible up to a few days in advance in Europe where there has been a concerted effort to combine atmospheric composition data from satellites and ground stations into the existing backbone of weather forecast computer models.

The European project – the Global and Regional Earth-system (Atmosphere) Monitoring Using Satellite and In-Situ Data project – is currently in the experimental stage. In the United States, planning for the application of satellite data in regional air quality forecast model is underway at the National Oceanic and Atmospheric Administration and the U.S. Environmental Protection Agency (EPA). But for forecasts to become more accurate and global, researchers need more and better observations, Engelen says. That's where NASA satellites are helping to fill in the gaps.

"To really do an accurate job of forecasting air quality, you have to know what pollution is coming in from upwind," says Kenneth Pickering of NASA Goddard Space Flight Center, Greenbelt, Md., who studies the chemistry and movement of gases through the atmosphere. 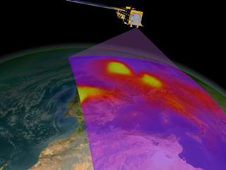 NASA's Aura satellite passes over Europe, collecting (simulated) data with the Ozone Monitoring Instrument, now used to improve air quality forecasts. Click image for enlargement. Credit: NASA/Goddard Space Flight Center's Scientific Visualization Studio For example, a recent study conducted by researchers from NASA’s Langley Research Center, Hampton, Va., and Jet Propulsion Laboratory, Pasadena, Calif., used satellite instruments to look at air quality in Houston, Texas, a city with major air quality problems. Using data from two instruments on NASA's Aura satellite, researchers found that not all of Houston's pollution was locally caused and there was significant long-range transport from the Midwest and Ohio Valley. "Although the finding was made possible by a computer model, it was greatly aided by the Aura satellite data," Pickering says.

NASA satellites are helping researchers evaluate the Clean Air Interstate Rule instituted in 2005 by the EPA. The rule calls for eastern U.S. power plants to cut sulfur dioxide and nitrogen oxide emissions by 73 and 60 percent, respectively, by 2018. Coal burning plants emit plumes containing sulfur dioxide and nitrogen oxides into the atmosphere, where they undergo chemical reactions and form aerosol particles that lead to adverse health impacts, degrade visibility and can influence Earth's climate. These aerosols are usually transported by wind away from their source to distant regions. Satellite instruments, as well as models and other information sources, allow researchers to create a history describing how much aerosol is transported and where, helping them to evaluate the rule.

"Satellites add considerable vertical and horizontal spatial detail, enabling a more scientifically sound way of understanding whether or not programs are making progress in reducing air pollution in the long term," says Rich Scheffe of the EPA in Research Triangle Park, N.C.

Satellite data still pose challenges, however, and researchers are trying to find ways to tease out specific information, such as how much of each gas exists at a specific altitude. This is a particularly challenging measurement to make in the air closest to Earth’s surface, where the information matters most relevant for air quality regulations. More research is needed to determine the value of the current data and to develop improved sensors for future satellites, Pickering says.

The advances in forecasting air quality are happening fast, spurred in part by concern about global warming. At Earth's surface, warmer temperatures can accelerate the reaction between chemicals in the air that form ozone. "The combination of the increase of transported air pollution and the interaction of climate change and air quality really puts a greater premium on satellite imagery for air quality applications," Scheffe says.