Sonic Boom Heads for a Thump 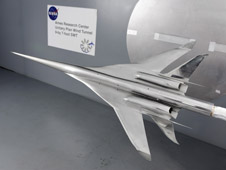 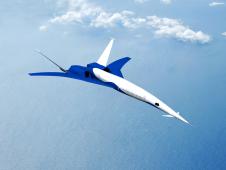 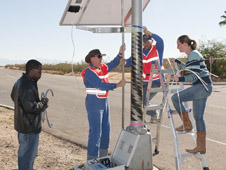 NASA's aeronautical innovators are one step closer to confidently crafting a viable commercial airliner that can fly faster than the speed of sound, yet produce a sonic boom that is quiet enough not to bother anyone on the ground below.

The key to this recent advance came when wind tunnel tests of scale model airplanes verified that new approaches to designing such aircraft would work as hoped for when aided by improved computer tools, which were used for the first time together in each step of the design process.

"That was really the breakthrough for us. Not only that the tools worked, but that our tests show we could do even better in terms of reducing noise than we thought at the start of the effort," said Peter Coen, NASA's supersonic project manager at Langley Research Center in Virginia.

Nuisance noise generated by a commercial supersonic jet's sonic booms during cruise, and by its powerful engines at takeoff and landing, has kept the speedy aircraft from entering service in the United States – except for Europe's Concorde, which was limited to trans-Atlantic flights only.

Using the computer tools, teams led by Boeing and Lockheed Martin, and funded through a NASA Research Announcement, came up with designs for two small supersonic airliners that would carry between 30 and 80 passengers and potentially enter service in the 2025 timeframe.

"In bringing their design expertise to the process, these companies are not only addressing the low boom design elements, but all of the other aspects necessary for a realistic design," Coen said.

For example, the computer tools show that one way to reduce the perceived loudness of a supersonic jet's sonic boom is to change the aircraft shape, in part, by lengthening the aircraft’s fuselage, making it much more slender. Theoretically, the noise issue could be solved by a really, really long aircraft body.

Unfortunately, while an 800-foot-long airliner may lead to publicly acceptable sonic booms, an aircraft that size still must fit at its gate, make turns while taxiing to the runway without hitting anything and generally not require an expensive redesign of the nation's airports.

"The long skinny fuselage is not a practical answer. In our pursuit of boom reductions, we examine the whole, three-dimensional shape of the vehicle including the engine configuration," Coen said. "Even then, we keep in mind that the airliner has to meet all of the other requirements which are part of good design practice."

To help reach their goals, the engineers relied on earlier studies that revealed how an aircraft’s overall configuration could modify the shape of the supersonic shockwaves coming off the airplane so that the atmosphere then reduces the sharpness of the wave. By the time the shockwave reached the ground the shock would be removed, resulting in a nearly inaudible sonic boom.

"The booms are still there, but your ear is tricked into hearing a thump," Coen said.

Two other design considerations are important. The first reduces the size of the proposed commercial airliner so it carries fewer passengers and is lighter. The second slows the cruising speed. While the Concorde cruised at twice the speed of sound, or Mach 2.0, this airliner would cruise at a slightly slower Mach 1.6 to Mach 1.8.

"These design choices not only made both the sonic boom problem easier to tackle, but make the takeoff and landing noise problem much more solvable, much more amenable to solutions with the technologies we have in hand," Coen said.

So how loud was the Concorde and how does that relate to NASA's goals of making a quieter supersonic airplane?

The measurement NASA researchers are using to base their work on is called perceived decibel level, or PLdB. Like comparing apples and oranges, PLdB is a different flavor of decibels than the measurement (dBA) often quoted when discussing how loud, for example, a rock concert is compared to a kitchen blender or library reading room.

Concorde's sonic boom noise level was 105 PLdB. The PLdB that researchers believe will be acceptable for unrestricted supersonic flight over land is 75, but NASA wants to eventually beat that and reach 70 PLdB.

"For this phase of the research, we did succeed in reducing the perceived noise level. In fact, one of the designs reached as low as 79 PLdB," Coen said. "It was a really big step, but we still have some more work to do to reach our ultimate goal of about 70 PLdB."

Additional studies already are under way to keep whittling away at the supersonic noise challenge and come up with solutions that will be acceptable to regulatory agencies such as the Federal Aviation Administration, as well as airplane manufacturers, the airlines and the general public.

And while a commercial supersonic airliner flying from New York to Los Angeles over the U.S. heartland may be another decade or two away, Coen said it's very possible that smaller supersonic business jets could debut in the skies much sooner because lighter aircraft create weaker shock waves, which makes the low boom design challenge easier to solve.

"The business jet would probably be the first on the market, and that would help introduce some of the technologies that eventually would be used on the supersonic airliner. But such product decisions belong to others outside of NASA," Coen said. "Our job is to support the science and technology behind those choices, eventually making supersonic flight available to the traveling public."