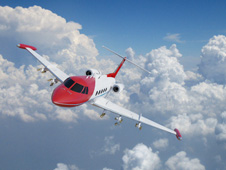 A computer rendering of the research aircraft NASA will use in a few months to collect vital atmospheric data about where, when and how high altitude ice crystals occur. Image credit: NASA/Eric Mindek
›  View Larger Image 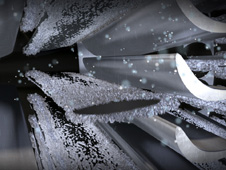 Polar opposites attract in the puzzling case of ice crystal engine icing, where the frozen crystals can be ingested into the core of a jet engine. Image credit: NASA/Eric Mindek
›  View Larger Image 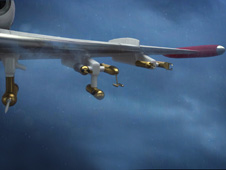 More than 20 meteorological instruments outside and inside the Gulfstream aircraft will be used to collect data. Image credit: NASA/Eric Mindek
›  Link to larger photo 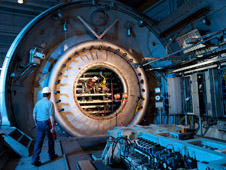 Technicians install a series of horizontal spray bars inside an opening to a NASA test facility that will simulate engine icing conditions on the ground. Image credit: NASA
›  Link to larger photo
NASA scientists are making progress in their preparations to mount a detailed research campaign aimed at solving a modern-day aviation mystery involving the unlikely combination of fire and ice inside a running jet engine.

The investigation deals with the seemingly strange notion that ice crystals associated with warm-weather storms can be ingested into the core of a jet engine, melt and then re-freeze, potentially causing the engine to lose power or shut down altogether. Safety officials have documented more than 150 incidents of this phenomenon since 1988. Most of the incidents have occurred in the tropics.

“It doesn’t seem intuitive that ice can form in the core of a warm engine,” said Ron Colantonio, manager of the Atmospheric Environment Safety Technologies Project at NASA’s Glenn Research Center in Cleveland.

So in order to make sense of the mystery, NASA and its research partners are planning to gather information by flying a specially-outfitted business jet in high-altitude, warm-weather conditions suspected of having a large amount of ice crystals.

Technicians in California are currently modifying a Gulfstream G2 airplane to hold a suite of meteorological instruments, with hopes of having everything ready for initial trial runs of the full setup in Florida this August.

The research team then will take the lessons learned from their trial runs, make appropriate changes and prepare for the primary campaign, which is now targeted between January and March, 2013. These flights will take place over Darwin, Australia, an area known for having the type of storms that include high levels of ice crystals.

For now, pilots are being trained to recognize the potential existence of these ice crystals, which are about the same size as baking soda, and advised to avoid the weather conditions as best they can. Although a potential hazard, no accident has been attributed to the phenomenon in the 23 years since it was identified.

In most of the known cases, pilots have managed to restore engine power and reach their destinations without further problems. According to the Federal Aviation Administration, there have been two forced landings.

For example, in 2005, both engines of a Beechcraft business jet failed at 38,000 feet above Jacksonville, Fla. The pilot safely glided the aircraft to an airport, dodging thunderstorms and ominous clouds on the way down.

It is expected that updated flight safety rules and engine testing standards will be adopted once all the research is compiled and analyzed during the next few years.