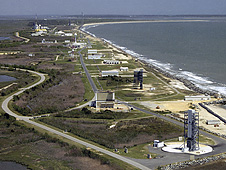 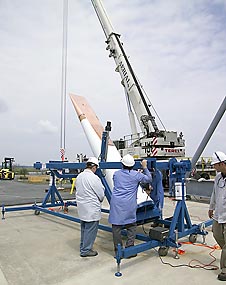 The HYBOLT experiment will sit atop the launch vehicle. Credit: NASA 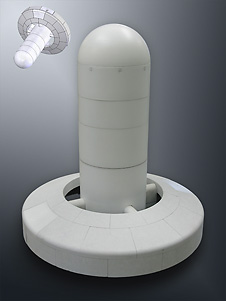 This reentry space capsule design is one of three probes included in the SOAREX payload. Credit: NASA 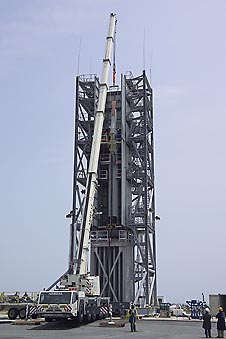 The ATK-ALV X-1 launch is being provided as part of a NASA/ATK partnership. Credit: NASA

Two NASA aeronautics experiments will hitch a ride on a developmental Alliant Techsystems, or ATK, suborbital rocket scheduled to launch from the Eastern Shore of Virginia this summer.

One experiment, designed at NASA's Langley Research Center in Hampton, Va., will gather data on air flow conditions and heating on vehicles flying at hypersonic speeds at least eight times the speed of sound, or 5,280 miles per hour. The other experiment will evaluate a possible shape for a space capsule that could travel to Mars and gather data on atmospheric conditions encountered by the reentering probes. Both experiments are funded by NASA's Aeronautics Research Mission Directorate in Washington.

The Hypersonic Boundary Layer Transition, or HYBOLT, experiment, will sit atop ATK's ALV X-1 launch vehicle when it launches from the Mid-Atlantic Regional Spaceport at NASA's Wallops Flight Facility at Wallops Island, Va., in August.

HYBOLT resembles the blade of a flat-head screwdriver and is designed to pierce the atmosphere to assess the boundary layer, a very thin layer of air that flows over the surface of a vehicle in flight.

"We should be able to conquer some of the challenges of hypersonic flight if we can get a better handle on air flow," said chief engineer Mark Croom. "At hypersonic speeds the temperature of the flow around the aircraft or spacecraft is so great that it affects just about everything. That includes the shape of the vehicle, the material it's made of and even the chemistry of the molecules in the air."

Instruments embedded in HYBOLT will send temperature and pressure information back to the ground as the rocket accelerates to Mach 8 and faster. The information will be used to improve design tools for future aircraft and spacecraft.

After gathering its data the experiment payload will separate from the rocket and fall into the Atlantic Ocean, exposing the second payload package, the Sub-Orbital Aerodynamic Re-entry Experiments, or SOAREX. SOAREX will capture data and send it electronically back to researchers before it, too, falls into the Atlantic Ocean along with the rocket.

SOAREX consists of three separate probes. Two comprise NASA's experiment and the third belongs to the U.S. Naval Research Laboratory in Washington. The NASA experiments, designed at NASA's Ames Research Center at Moffett Field, Calif., will characterize a new self-orienting reentry vehicle shape. The largest of the probes, called the Slotted Compression Ramp, or SCRAMP, resembles a blunt-nosed cylinder mounted on a ring.

"The SCRAMP design offers a super-stable re-entry system -- sort of like a big hypersonic badminton birdie that rights itself nose-forward after tumbling," said principal investigator Marc Murbach. "The slot between the cylinder and the circular heat shield also enhances drag and stability."

SCRAMP represents a significant change in atmospheric entry probe design from the traditional blunt body space capsule shape that has been used since the 1960s. By using the blunt-nosed shape NASA may be able to embark on new planetary missions with probes that can carry more instruments and fly with more stability and less drag. SCRAMP is accompanied by an instrument that will measure atmospheric conditions at the point of release.

The third small probe in the SOAREX package will test an automatic identification system, or AIS, receiver and transmitter designed for ocean recovery. It is nicknamed "Melonsat" because of its shape. The foam-filled sphere will float and its beacon is designed to transmit its Global Positioning System satellite coordinates for about seven days until it is recovered.

The ALV X-1 rocket stands more than 53 feet tall. The two-stage suborbital launch vehicle uses solid-fuel motors for propulsion. During its voyage the rocket is expected to reach an altitude of more than 200 nautical miles and stay aloft about 10 minutes.

The mission is a partnership between ATK of Salt Lake City and the Fundamental Aeronautics Program in NASA's Aeronautics Research Mission Directorate. ATK provides the launch vehicle and launch services and NASA provides the range services.