Nothing Bugs These NASA Aeronautical Researchers
NASA's gutsiest scientists say they don't get bugged no matter what kind of sticky situation they find themselves smashed into.

The preceding dose of hyperbole is brought to you by a team of folks at NASA's Langley Research Center in Virginia who are studying ways to prevent the remains of insect impacts from adhering to the wing of an aircraft in flight.

While the effort is undeniably a goldmine for puns, the research is serious and positive results could help NASA's aeronautical innovators achieve their goals for improving the fuel efficiency of aircraft cruising across the country. 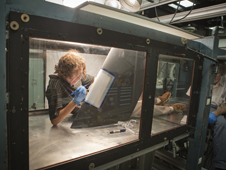 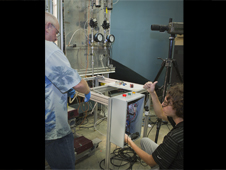 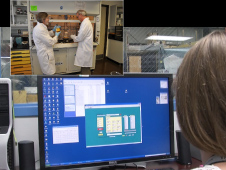 Other members of the bug team are shown at work as they test options for preventing bug impact build-up on the leading edges of aircraft wings. Image credit: NASA
›  View Larger Image

"We are the bug team," said Mia Siochi, of the Advanced Materials and Processing Branch at Langley. "It's important work, but we also have a lot of fun with it."

Anyone who has driven through a cloud of insects knows how quickly the bug guts build up on the vehicle, causing problems with visibility, clogging the air intake and radiator, and ruining the car's exterior finish.

The problem for an airplane is that its aerodynamic design is meant to have air move very smoothly across the body and wing surfaces, which is called laminar flow. When there is a disruption in that laminar flow, such as from the accumulation of dead bug parts, you induce the opposite of laminar flow, which is turbulence.

Finding ways to maintain laminar flow through all phases of flight is a big deal for the aviation community because it could save millions in fuel cost, while also reducing the amount of noxious emissions released into the atmosphere.

"It's major enough that people have been trying to solve this as far back as the 1960s," Siochi said.

The key to the solution of preventing insect residue build-up in flight is to find a non-stick coating or material of some kind that can be applied to an airplane's body and wings, and that will work with the unique chemistry present in a typical bug splat.

Not only is the intent to limit or prevent the initial adherence to the wing, but to increase the chances the bug residue will more easily erode or sheer off during the flight and leave the wing smooth again.

Understanding that insect biology and its interaction with airplane parts, and then coming up with a decent anti-stick coating is not as easy as you might think. For example, you can't use the same spray you might apply to your car's windshield to make rainwater bead up and roll off.

It's not just water you have to deal with.

"Yes, there's a lot of water in a bug, but there's also some biological components that actually impart the stickiness, and we have to deal with preventing those from sticking even though we know how to prevent water from sticking," Siochi said.

To help them learn more about insect adhesion to materials treated with various coatings, the bug team relies on a unique desk-sized wind tunnel – the Basic Aerodynamic Research Tunnel, or BART -- equipped with tubing that connects from what they affectionately call "the bug gun."

It has proved to be a very effective tool for examining materials, coatings and insect splats, but the small wind tunnel doesn't exactly copy what's happening in real life.

"We're shooting bugs at about 150 mph as we try to mimic takeoff and landing speed, but the bug is moving and the target is stationary. In reality it should be the other way around," Siochi said.

Early tests show certain coatings can shrink the area that insect remains adhere to by 90 percent, and reduce the build-up, or height of the sticky bug guts, by 40 percent. But tests continue as there has been no "Eureka!" moment – yet.

"We don't have the answer yet. We have some potential candidates, but we still have more work to do," Siochi said.

Part of the challenge, Siochi explained, is to make sure that the solution not only works, but that it is also practical.

For example, the coating should not have to be applied before every flight as that would be too time-consuming. Long term exposure of the coating on the wing or aircraft surface should not do any damage. The coating must not add so much weight that it costs more in fuel than it saves.

At least on that last point, Siochi doesn't see a problem.

"These are very, very thin coatings that we spray on, so the weight penalty is probably not there," she said.

The bug team is working toward conducting flight tests within the next two years.

All of this research by NASA does beg the question, how does a material scientist procure the insects she needs?

"By the thousands. In a tackle shop. With a credit card," Siochi explained with a smile. "After checking with our procurement officials and the legal office to make sure there were no regulations against using insects like this."

Initially, the bug team used crickets – procured from a local tackle shop -- which were convenient to shoot uniformly in the bug gun, but also turned out to be too big for their small wind tunnel apparatus. So they switched to fruit flies.

"We get fruit flies from a fruit fly shop and we propagate them, so we have a supply of bugs that we've kept going for a couple of years now," Siochi said.

Siochi remembers one occasion when a shipment of fruit flies was delivered from California in the overnight mail, and she wasn't in the office to receive them, so they were delivered somewhere else instead.

So one of her colleagues was dispatched to hunt down this container of several hundred fruit flies and wound up searching all over Langley before finding them.

"Just another day of work for the bug team," Siochi said. "There's no doubt it's a real different kind of lab experience."

The effort is part of NASA's Environmentally Responsible Aviation project, which is managed by the agency's Aeronautics Research Mission Directorate.