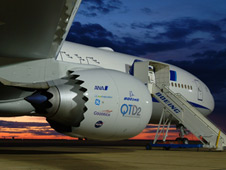 NASA partnered with industry many times during years of chevron testing, including these tests of nozzles on a specially-adapted GE engine mounted on a Boeing 777. Chevron nozzles will be seen on more engines in the coming years. Image credit: The Boeing Company/Bob Ferguson
›  Link to larger photo 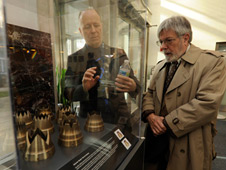 Dr. James Bridges (left) talks about the many different design ideas for chevron nozzles with a visitor to the chevron nozzle exhibit at NASA Headquarters on December 9. Image credit: NASA/Paul Alers
›  Link to larger photo

The aircraft noise-reducing benefits of chevron nozzles and the research it took to bring them to the public were the topics of a brown bag lunch at NASA Headquarters on December 10. Image credit: NASA/Paul Alers
›  Link to larger photo

The holidays are here and the nation's airports are busier than ever –thousands of airplanes taking off and landing. Passengers and people living around airports are reminded that the airplane is not the quietest mode of transportation; certainly not as quiet as a sleigh pulled by eight tiny reindeer.

Fear not, because even while travelers are heading home, NASA continues working with others in industry and academia on technologies that will create a more silent night (and day) around airports.

One of the most recent noise-reducing technologies shepherded through the research process by NASA and now making a difference on commercial jet engines is chevrons.

Chevrons are the sawtooth pattern seen on the trailing edges of some jet engine nozzles. As hot air from the engine core mixes with cooler air blowing through the engine fan, the shaped edges serve to smooth the mixing, which reduces turbulence that creates noise.

At first glance chevrons appear to be an elegant solution, but the simplistic-looking design masks years of experimentation that relied on an ever-evolving set of research tools to correct mistakes along the way.

"Early on, we didn't have the advanced diagnostics, instrumentation and insight to know what we had done to make it worse instead of better," Bridges said. "You have an idea and then you cut out a piece of metal and try it. Sometimes the kernel of the idea might have worked out, but the way you did it wound up causing more noise."

NASA is exploring another noise-reducing technology – this one for helicopters – that is going through a process of discovery similar to that for the chevron.

Helicopters are notoriously loud because of the turbulence caused by their blades spinning through the air. Before specific solutions can be tested, NASA must first collect data on how the rotor blades interact with air under a variety of operating conditions. A series of tests to do that were conducted on a UH-60A Blackhawk helicopter rotor in a NASA wind tunnel from January to May 2010.

But even before the tests could be run, new techniques for making measurements over the large area covered by the whirling blades had to be invented and tested. Three different data-gathering methods using lasers, light and high-speed photography were modified for use in the wind tunnel.

It's exactly this kind of methodic, detailed effort – where a critical measurement may first require thorough tests to make sure the data collection is even possible – that defines the foundational research necessary to solve the problems of flight in general, and noise in particular, Bridges said.

"Until somebody works on the details that make the measurement work or validates the computer code in the first place, we wouldn’t realize the insights we need to make progress," Bridges said.

"Sometimes it’s hard to make a direct connection between all of this preliminary work and the ultimate goal," he said, "but when you have enough of these things going you will have breakthroughs and successes."

Noise reduction research is just one of several key investigations underway by NASA's Aeronautics Research Mission Directorate in Washington. These include efforts to improve the intrinsic safety of current and future aircraft, to improve air traffic control procedures for the Next Generation Air Transportation System, and to develop technologies that will enable more fuel efficient aircraft with reduced emissions. Jim Banke
NASA Aeronautics Research Mission Directorate
Find this article at:http://www.nasa.gov/topics/aeronautics/features/bridges_chevron_events.html